Share All sharing options for: The Best of Japers' Rink, 2013

The calendar may have already flipped to 2014, but darn it, as long as people are still wishing each other a Happy New Year, we're going to take one more opportunity to look back at the very eventful year that just ended - as seen through the eyes of all of us here at Japers' Rink.

So here is our best of 2013, in no particular order, with a money quote from each...

When Everything Changed... And If It Needed To - "George McPhee's record as Capitals GM is characterized by an abundance of patience and caution. He has never been one to make a "panic trade," conservative sometimes to a fault. But he and/or those around him over-corrected twice in response to runs of what may have been little more than bad luck, leaving in the wake a team devoid of an identity and seemingly lacking in vision, with personnel that doesn't appear to be particularly well-matched to the systems that followed and vice versa."

Alex Ovechkin Finds His Even-Strength - "Now, it's possible that this ratio of "non-carry vs. carry" goals is different than the split in overall scoring chances, but this is our story and we're sticking to it - Ovechkin is having more success now that he's letting others lug the mail and he's going to dangerous spots that he couldn't get to with the puck."

Has Marcus Johansson Finally Arrived? - "Johansson's speed and puckhandling ability are utilized particularly well on a line with Alex Ovechkin, largely because of the captain's newfound dedication to not carrying the puck into the offensive zone [...] The attention that Johansson's linemates demand from opposing defenses gives him a little bit of extra ice, allowing him to avoid being immediately knocked off the puck in the a fashion that had become all too familiar."

Adam Oates and Optimism's Return to DC - "Strategically, Oates has flipped the superstar winger from the left to the right side and convinced him to let others carry the mail, making him a once-again big-time scorer at even-strength, while at the same time posting him up on the half-boards (rather than the point) on the power-play, which has resulted in more power-play goals and goals-per-minute than any other player in the League. Heck, he's even become - dare we note? - a bit more aware defensively. But Oates's impact on Ovechkin goes far beyond X's and O's and into the relationship the former has invested in and the latter has seemingly been seeking for a while now."

How the Separation of Alzner and Carlson Strengthened the D Corps - "The division of Carlzner has given the bench boss a bit of flex in how he chooses to deploy his defensive troops [...] [M]any teams have scoring lines 1A and 1B, as opposed to the single top scoring line we see utilized here in DC. Ideally, with Carlson and Alzner on separated, the Caps would have D-pairings 1A and 1B to counter." 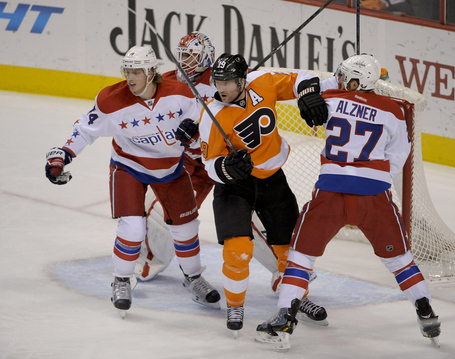 Operation Save Wardo: The Thrilling Rescue of Joel Ward - "Alas, poor Wardo... would anyone come to his aid? Who would be his hero on this daunting morning? Would he ever roam free outside of the tile and porcelain and extra soft toilet paper again??"

The Losingest Losers that Ever Lost - "These days, of course, there are 29 losers in the NHL every year, many of which have been winners recently enough (or ever) that they're still playing with house money when it comes to goodwill from the media and their fans. Many haven't. Either way, measuring this entertainment product's success and failure solely on the number of parades thrown to honor a team's ultimate victory is a hard way to go."

A Trade Gone Bad - "There's not a whole lot about this that isn't frustrating. There's not a whole lot about it that doesn't absolutely stink. And there's not really anyone - player, coach or GM - who is coming out of this unscathed. Argue about the pieces moved in the trade or the timing of the trade or the ability of Filip Forsberg to be the next Peter Forsberg all you want, none of it matters if the coach and GM aren't in sync with how the acquired pieces are used - and clearly they weren't."

Entertaining the Idea of Mikhail Grabovski - "If Grabovski does end up a Capital, and he has the effect on the Troy Brouwers and Martin Erats of the world as he had on the entire Leafs roster, it will go a long way towards keeping pace with the toughest division Washington will have played in since the Patrick days-and especially if Alex Ovechkin and his merry band of top-liners produce at anywhere near the rate they did in 2012-2013." [Ed. Note: Just FYI, in 2014 we will be asking Kevin to write a post entitled "Entertaining the Idea of a Caps Stanley Cup".] 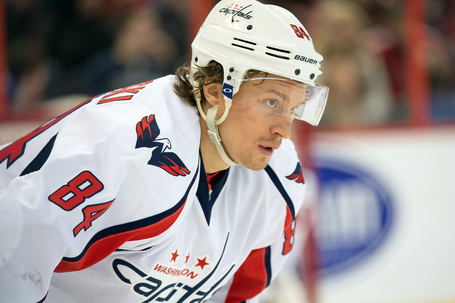 How Mikhail Grabovski Fits In On The Capitals - "At even strength, the Caps just got much better at 2C. Whether Grabovski (or someone else) can pick up Ribeiro's slack on the power play remains to be seen, but for the vast majority of game time, the Caps are a better team today than they were yesterday or when they last played meaningful hockey. But upgrading the 2C spot isn't the only puzzle piece that changed today; Grabovski's addition will send ripples throughout the lineup."

Ovechkin's Hart Hat Trick: The Writers Got It Right - "It's often said that as Ovechkin goes, so go the Caps, and this season was a perfect example of that as he practically put the team on his back and carried them to another Southeast Division title. 16 times this season Ovechkin was kept completely off the scoresheet; in those 16 games, the Caps were 4-11-1 (2-8-1 in the first half of the season). When he scored at least one goal? 19-4-1. In multi-point games for the captain, the team was 15-1-0; when he scored more than one goal, they were undefeated (6-0)."

Ovechkin's Simply Spectacular 47-in-50 - "Even though it doesn't look like Ovechkin will hit 50-in-50 [...] his hot start to this season combined with his torrid finish to last season arguably exceeds the most celebrated 50-game regular season stretches ever, as far as goal-scoring is concerned."

Joining the 400 Club - "Ovechkin has established himself as one of today's most lethal goal-scorers, and is on his way to being etched in the history books as one of the game's all-time greats, as well. And while the path hasn't always been smooth, the trajectory not always straight, he's better than ever... a fact made more special, perhaps, because of that not-so-smooth path and not-so-smooth trajectory."

All-Time Caps Team Tournament - "This is a pretty classic offense vs. defense battle. Yes, the 1985-86 team had a balanced attack and some impressive looking offensive numbers of their own, but consider the era in which they played and the very clear edge in offense belongs to the 2009-10 team. [...] On the blueline, the edge goes to 1985-86, what with those three Hall of Famers all in their twenties, Kevin Hatcher in his first full season in the League and Darren Veitch rounding out an impressive top-five... and a comically better group than Green, Tom Poti, Schultz, Joe Corvo (!), rookie John Carlson and Shaone Morrisonn." [Ed. Note: Be sure to click through to find out how we got to these two teams, as well...]

Optimizing the Capitals' Lines and Possession - "It's always possible that Oates is sacrificing short-term success to stick to a longer-term plan, whatever that may be, as we saw last season with Alex Ovechkin's move to right wing (and as we're seeing now with Tom Wilson, who has only been given severely limited minutes to this point in his young career). If that's the case, then, at some point, we should expect to see some real payoff as Oates optimizes his line combinations and pairings, and for the team to receive a subsequent boost."

Avoiding a Shanaban: Examining Both Sides of the Tom Wilson Hit - "[J]ust as not all illegal hits are dirty, not all illegal hits are worthy of supplemental discipline. In this day and age where the most vicious hits at times seem to either go unpunished or draw lengthy suspensions, that can be hard to understand. Right or not, we've become programmed to expect any sort of violent collision to be met with a suspension (which we will then decide is not long enough). As hard as it is to believe, the refs may have actually gotten this one right..."

Amazing in-game action captured by our own Clyde Caplan

The year also included some of our favorite regular features, from our look at each player's performance in the Rink Wraps to JP and Rob arguing over a glass (or 12) of beer in Two Dudes, from Clyde's amazing photo galleries to Rob breaking down the Moments that Mattered, to new free agent acquisitions Peerless Sittin' at the End of the (Caps) Bar, Muneeb on stats, CapitalsHill on the GIFs and Kevin on pretty much everything.

And there you have it! Hopefully you enjoyed this little stroll down memory lane, and will stick around to see what kind of crazy things we come up with in 2014 - and of course, thanks to all of you for reading, re-reading, commenting, and all-around supporting us over the last year, and every year. You are the wind beneath our wings, the straw that stirs our drink, the... well, you get the picture.