How Mikhail Grabovski Fits In On The Capitals

The addition of one player, Mikhail Grabovski, to the Washington Capitals' roster has dramatically changed the look of the team, adding depth and flexibility throughout the forward ranks.

Share All sharing options for: How Mikhail Grabovski Fits In On The Capitals

By now every Caps fan has heard that there is a new second-line center in town:  Mikhail Grabovski. He's arguably the best 2C the Caps have had since Sergei Fedorov, and maybe the best yet in the Alex Ovechkin Era. Mike Vogel posted an article discussing some details of how the deal went down, and some of the implications (on- and off-ice) thereof. One line in particular stands out, as it gets to the very heart of the matter. Adam Oates said of his new pivot:

"He fits into our puzzle. I talked to him about what a puzzle means to me, his skills set and where he’d fit."

The piece of the puzzle that Grabovski fills is intuitive for people not named Randy Carlyle. The Caps have struggled with finding a suitable player for the second-line center position for years, and when Mike Ribeiro cashed in on the favorable assignment he had in D.C. by signing a long term deal with Phoenix, the search was on once again.

Ribeiro had great production last season, but over half of it was on the power play, and his line was never very good at maintaining possession, no matter who was on it. In fact, almost every player on the team had better possession numbers away from Ribeiro than with him. Grabovski, on the other hand, made most of his teammates better during the last two seasons. That includes an almost 8% bump for Phil Kessel, Toronto's best offensive player, and 7% and 9% boosts for Nikolai Kulemin and Clarke MacArthur, Grabovski's two most frequent linemates over that period, respectively. Despite the possession play and considerable box cars over the prior three seasons, Carlyle decided to make Grabovski a checking-line center. Grabovski was fed very difficult minutes, and still came out with a positive Corsi Rel. Compare last year's usage of Ribeiro and Grabovski by Oates and Carlyle (via Hockey Abstract): 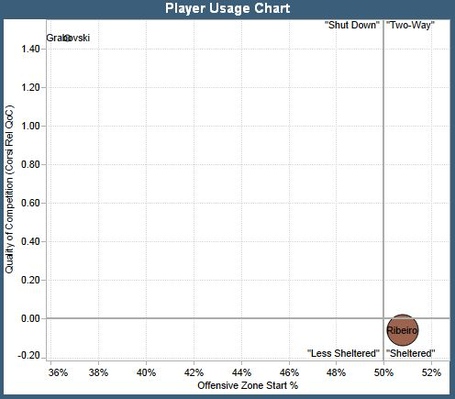 Despite easier competition and more favorable zone starts, Ribeiro was a large negative in Corsi Rel, while Grabovski was a positive. The points weren't there for Grabovski like they were for Ribeiro, but that's understandable given the chart above (and, again, Ribeiro did most of his damage on the power play, anyway). Take a look at what Grabovski has done when he was used in a top-six role (via Some Kind of Ninja): 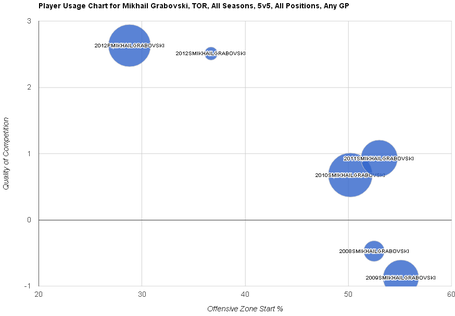 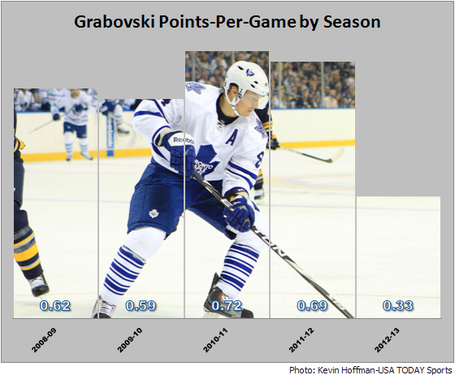 At even strength, the Caps just got much better at 2C. Whether Grabovski (or someone else) can pick up Ribeiro's slack on the power play remains to be seen, but for the vast majority of game time, the Caps are a better team today than they were yesterday or when they last played meaningful hockey. But upgrading the 2C spot isn't the only puzzle piece that changed today, Grabovski's addition will send ripples throughout the lineup.

Earlier in the summer George McPhee indicated that Brooks Laich would get the 2C duties this season. While we've all grown accustomed to taking McPhee's roster statements with a grain of salt, the roster at that point did look like one that might necessitate Laich as the second-line center. With Grabovski, the Caps will no longer need to try (yet again) to get top six production from Laich as a center, and that's a good thing. Laich is the most versatile Caps player. He can slot into the lineup as a left wing on any line, and handle the task that line is assigned with, be it scoring or defending. Now that Laich is free to play a variety of different roles, the Caps will have much more flexibility in what they do with their forward lines.

The top four left wings on the roster (and we are going to assume that Marcus Johansson is on the opening night roster, and will not speculate about any player being traded to open up cap space at this point) will be Laich, Johansson, Martin Erat, and Jason Chimera. There's a lot of versatility in there, in terms of styles and skill sets. Chimera looks like the only guy you really wouldn't want in a scoring role; Johansson is the only one you wouldn't really want in a checking role. Laich and Erat both have strong two way games, though Erat is a bit better offensively. That means the Caps have three players that can play on a scoring line, and at least two that can play on a checking line (Erat could play in a checking role, but it seems like a waste of his talents). Given that Laich can play center in a checking role, and has done it very well, that means the Caps have another option in developing a strong shutdown line. When you run through the permutations, the Caps could play with three scoring lines and a checking line, or two scoring lines and two checking lines. Let's take a look at what that might look like.

That's a great looking set of forwards. Ovechkin, Backstrom, and Johannson have already shown what kind of damage they can do together. Erat, Grabovski, and Brouwer have a great mix of speed, passing, shooting, defense, and checking. It's a balanced line that should be very solid. Perreault and Fehr have played well together and Laich should fit in nicely with them, able to do the dirty work, defensive work, net crashing, and all the little things that make a third line successful. And while that might seem like an expensive fourth line (and it might well be), that's not something anybody should be too concerned about - every player on contract is paid regardless of how they are utilized, and Oates should (and will) build lines that give the team the best chance to win, without regard for "where a guy should play because of his salary." The teams that go deep in the playoff have depth (meaning talent) in their lower lines. The line set up above has that.

The versatility described above means that if Johansson doesn't keep up the strong possession game that he showed towards the end of last year, Erat or Laich could move up to the top line, with the other playing on the second line. Chimera moves up to the third line, and now the team just needs to find a fourth line wing, which should not be difficult. Over the course of a long season, there will be injuries. The great thing about this lineup is that no matter which LW gets injured, the team only needs to replace a 4th line wing (obviously, several injuries will deplete the lineup, but no team can survive too many injuries at one position). Given the depth on the right side, the same statement applies, except for Ovechkin. Caps fans have already seen what happens when Backstrom misses significant time, and now the Caps have a center that can play on the top line should Backstrom get hurt again. Given Grabovski's numbers with Kessel, it looks like Ovechkin's possession (and thus, opportunities to score) wouldn't suffer with Grabovski like they did with Ribeiro. Backstrom is one of the best playmakers in the game, so while there's no need to get too smart for the room and split up Ovechkin and Backstrom, it's nice to know there's a backup option in case of tragedy. So at center, the Caps have two players that can play top line center (Backstrom and Grabovski), and two that can play third line center capable of filling in on the second line over the short term (Perreault and Laich).

If, for some reason, Oates prefers a more traditional deployment, with the third line serving as a shutdown line, the lines could look like this.

Given their personnel, it makes more sense to go with three scoring lines, keeping Perreault in the lineup, but should the Caps find themselves needing to put together more than one checking line (or needs to get a face-puncher into the lineup), this would do the trick. Chimera, Laich, and Ward have experience as a successful checking line, so that line has some appeal. But the fourth line has less defensive ability, and Fehr's scoring talent will be wasted with Beagle and Volpatti. Ultimately this lineup provides a marginal improvement in the checking line (Chimera, Beagle, Ward up above) and a marginal decrease in fourth line ability, while taking Perreault out of the lineup. While it's not what I'd choose, there is value in the versatility.

Generally puzzles only fit together one way, but with the addition of Grabovski, Adam Oates suddenly has the freedom to treat the puzzle like a choose your own adventure.