2013 Capitals Forward Pairs: The Good and The Bad

Share All sharing options for: 2013 Capitals Forward Pairs: The Good and The Bad

With George McPhee's declaration yesterday that Brooks Laich is the Capitals' second-line center and his by now familiar "we like our team" expression of overall comfort with his current cast of characters, the Caps' general manager essentially closed the book on a free agency period that was never really opened. (Of course, if he was truly happy with his second-line center options, why pursue Vincent Lecavalier around the draft, or trade for Mike Ribeiro last summer, for that matter? But that's neither here nor there...)

While forwards in hockey spend most of their time skating three abreast, combinations of wings and centers can often focus on pairings. Which center (Nicklas Backstrom or Mike Ribeiro) should get Alex Ovechkin? Who's going to be the scorer for the one who doesn't? And so on. It's a lens through which our buddy Peerless has been looking at players for quite some time, and it makes sense, in part because it's convenient (if not wholly telling) to look at results this way: here's what Player X did when he skated with Player Y; here's what he did when he didn't skate with Player Y.

That's precisely the type of data you can find on HockeyAnalysis.com. For example, here you can see that when Ovechkin and Backstrom have skated together at five-on-five over the past five seasons, 57.3% of Corsi events (shots directed towards the goal) went in their favor; Ovechkin when skating without Backstrom was at 50.5% and Backstrom was at 50.9% when skating without Ovechkin. (Think that whole has been greater than the sum of its parts?)

Of course, that is fairly devoid of context, including game situation (i.e. score effect) and zone starts (someone who starts more shifts in the offensive zone has a leg up, Corsi-wise, on someone who starts more in his own end), not to mention the other skaters on the ice on either team. But it's still worthwhile in providing insight into what is and isn't working and prompts as to lines of further investigation.

With that in mind, here's a look at every combination of Caps forward pairs that skated 50 five-on-five minutes together in 2013 (stats via HockeyAnalysis.com; small sample size caveats, etc.; click to enlarge): 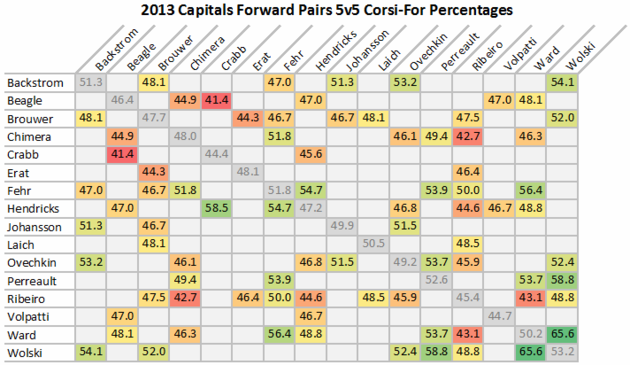 It's pretty straight forward, but what you see there is each forward pair that met the minutes minimum and their Corsi-For percentage (CF%) when on-ice together (or the individual's overall CF% in the gray boxes), with the colors ranging from green to red and corresponding to the ranking among these pairs. So Backstrom and Ovechkin, for example, were at 53.2%, which was pretty high on the list. And here's a better look at those rankings: 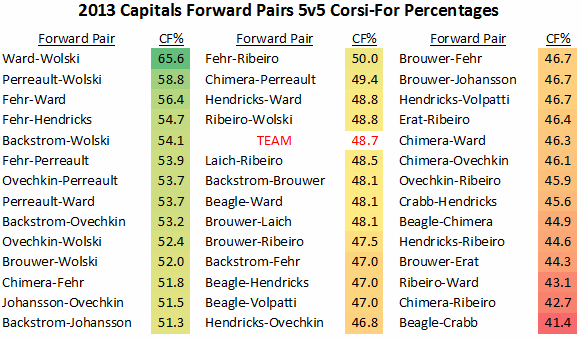 Regardless of what these charts say, at this point it's probably a decent bet that the Caps open the season with Johansson-Backstrom-Ovechkin, Erat-Laich-Brouwer, Chimera-Perreault-Ward, and then some combination of Aaron Volpatti, Jay Beagle and Fehr, with Michael Latta as the 13th forward (unless Tom Wilson blows everyone's doors off and makes the team). It's also probably a decent bet that the 2013-14 Caps are a better puck-possession team than they were in 2013, and they'll likely need to be, in order to stay competitive as their power-play and five-on-five shooting percentages are likely to regress, to differing degrees.

Tomorrow, we'll take a similar look at the defensive pairings.