Entertaining the Idea of Mikhail Grabovski

Of available free agents, the recent Leafs' buyout victim looks like he could be the most compatible replacement for Mike Ribeiro.

Share All sharing options for: Entertaining the Idea of Mikhail Grabovski

Given the unjust cosmic alignment of the hockey planets, it was only appropriate that when George McPhee and the Washington Capitals finally solved their second line center issue, it was with a thirty-three year old in the final year of his contract who would be looking for one final payday before riding into the sunset. And then, of course, Mike Ribeiro produced like a man who deserved that last big contract, making a second season in Washington for the slippery center about as likely as a one-legged gymnast. 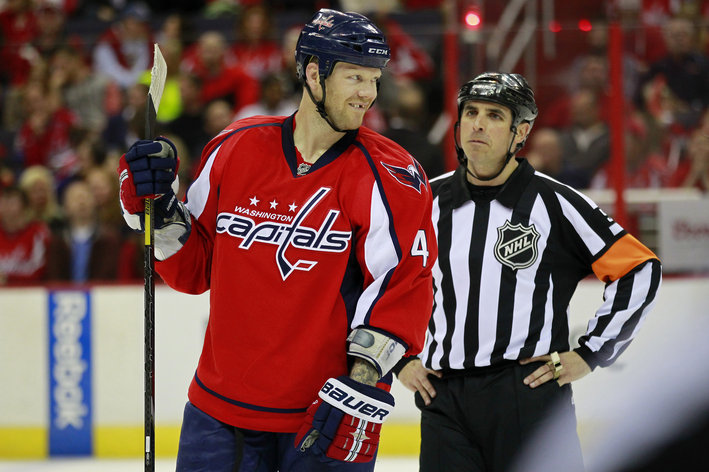 Heading into free agency, the Caps have needs, but which is the most important to address?

Thus, the Caps again face a gaping hole in the middle of the lineup. Though with Brooks Laich presumably healthy at the start of the 2013-2014 campaign, and with Mathieu Perreault proving during the shortened season that he's got what it takes to produce at pivot under Adam Oates, perhaps the need for a second-line center isn't quite so commanding as previously thought. At the very least, perhaps the Caps could get by with what they've got in-house.

Indeed, after an examination of this summer's free agent centers, nothing seemed to fit the Caps' needs.

And then the Toronto Maple Leafs bought out Mikhail Grabovski. And, whether because Grabovski celebrated his wedding over the weekend and was not fielding calls or for some other mysterious reason, he remains available.

When weighing the merits of Grabovski as a potential second line pivot in Washington, it's important to take with a grain of salt last year's numbers, where he had the worst production of his career, and obviously did not see eye to eye with his new head coach (and if you're asking me to explain why Randy Carlyle would give likely his most talented playmaker a ghastly 37% of offensive zone starts, I'm afraid I have no answer for you). It's also worth noting that under Carlyle, the Leafs were pretty much the worst possession team in the league, and didn't have a single player with a positive CorsiOn. Grabovski's stuggles last year came on the heels of the two best seasons of his career from 2010 through 2012, and at least one of those Toronto teams wasn't exactly burning out the goal-light.

But read a little deeper into Grabovski's numbers and they only become more encouraging. The year before last, then still under Ron Wilson, Grabovski not only put up 51 points, but did so with the best possession numbers on the team, and by no small margin. The year before that he also led his team in CorsiOn and dramatically tilted the ice as compared to the rest of his teammates. Both of these impressive campaigns came on teams that were in the bottom half of the league in possession.

Should he be in Caps red next season, Grabovski would probably find himself on a line with Martin Erat and Troy Brouwer, who both struggled to possess the puck on a line with Mike Ribeiro last season. Brouwer and Ribeiro largely made up for this with power play production, and Erat was a positive possession player before coming over from Nashville, leading one to draw the reasonable conclusion that his numbers were somewhat anchored by the Ribeiro/Brouwer Corsi sinkhole.

But Grabovski, unlike Ribeiro, improves the possession numbers of whoever he's skating with, almost to a tee. In 2011-2012, only one skater who played more than 100:00 with Grabovski saw his CF% decrease in those minutes. That skater? Our old friend Joey Crabb, who skated 157:06 with Grabovski. In 2010-2011, the story is the same- in fact, it's even more impressive. Every skater who spent more than 15:00 on the ice with Grabovski saw their possession numbers improve, and many of those by 10 percentage points or more. There were, uh, a lot of skaters who saw more than 15:00.

Last season Washington was 21st in the league in five-on-five CF% (and it's probably worth noting here that strong possession numbers are by no means a guarantee of playing time in Adam Oates's D.C.). That ugly number arose in no small part due to the big ice time granted to Ribeiro's line, be it the second line or with Alex Ovechkin in the nominal first. If Grabovski does end up a Capital, and he has the effect on the Troy Brouwers and Martin Erats of the world as he had on the entire Leafs roster, it will go a long way towards keeping pace with the toughest division Washington will have played in since the Patrick days-and especially if Alex Ovechkin and his merry band of top-liners produce at anywhere near the rate they did in 2012-2013.

There of course remains the dilemma of finances. Karl Alzner and Marcus Johansson remain unsigned. Their signings will presumably leave George McPhee with somewhere between $3.5 and $4m to work with. It is not unreasonable to think that this is in the ballpark of what Grabovski will command, given the diminishing nature being bought out tends to have on one's future value. We've already seen Vincent Lecavalier's salary drop from $10m to $6m, and Jeff Schultz from $3m to $700k.

So, if you're George McPhee do you try to put some cash towards a 29-year-old, productive, possession-boosting center, or do you like what you have in Brooks Laich and Mathieu Perreault down the middle, and try to make use of that cash elsewhere. Like another top-four defenseman maybe? Both temptations must be strong. Hopefully he gives in to at least one...