Free agent blueliners and the next step for Marcus Johansson in our latest installment of "you ask, we answer"

Our first question this week goes to Rob and is about free agent defensemen:

@JapersRink now that lydman is retired, who is the top 4d the caps should go after?

@JapersRink Do you like any left handed defenseman out there in free agency that can fill that top 4 spot?

Right off the bat we should acknowledge the reality that the Caps just extended John Erskine after seeing him play in the top-four to start this season, and that's where he finished the campaign - there's no real reason to believe they think they need to upgrade the position... even if Adam Oates admitted as much. (They also extended Jack Hillen, and have Dmitry Orlov as a left-handed blueliner presumably in need of playing time as well... we like our team.)

Caps D-Pairs: The Good and The Bad 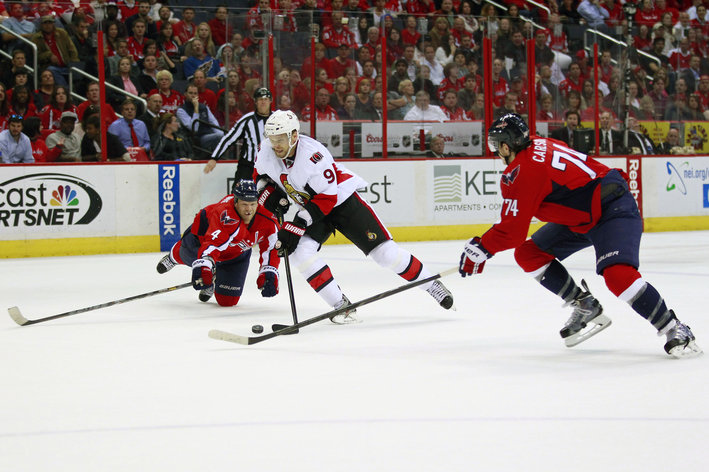 As for the question, the short answer is "just about anybody." But there's a difference between adding a defenseman that is better than John Erskine, and adding a defenseman that gives the Capitals a defensive corps that could do battle with the best teams in the East. There are a few lefties out there (and remember, Oates is going to play a lefty on the left side, and Mike Green and John Carlson already have the right side locked down on the top two pairs), so let's take a look at the options. There are some talented players available, but all have their flaws (hence why they are as yet unsigned).

First let's sift through the flotsam that remains on the flea market. Ron Hainsey played top 4 minutes in Winnipeg, but never really seemed like he lived up to his last contract (and is probably black listed for speaking out against the owners during the lockout). Still, he's young enough that you don't have to worry about him falling apart over the season and he has solid puck skills and mobility so he should help get the puck out of the zone and up ice. Tomas Kaberle has been addition by subtraction during his last few NHL stops and is basically the exact opposite of what the Caps need. He's an all-offense PP specialist, and the Caps already have enough players to fill out a deadly PP unit. Filip Kuba has a decent balance of offense and defense, as well as experience with a young stud defensemen as he was tasked with covering defensive responsibilities for Erik Karlsson while Karlsson was on his way to winning the Norris Trophy. Tom Gilbert, like Hainsey, is still young, mobile, and has decent puck skills, but any guy that plays well enough to get booted from the formidable (or not) Edmonton Oilers defensive corps requires some due diligence. [Edit: Turns out Tom Gilbert is a righty, so cross him off the list, but the post is written so let's go with it...] While we are on former Oilers, there's Ryan Whitney... just no. Toni Lydman is retired, Roman Hamrlik and Tom Poti are from the "been there, done that" pile, even if either could play in the NHL anymore, and Douglas Murray and Greg Zanon are both 33 going on 53 with the wear and tear they've put on their bodies. Zanon at least still played top-4 minutes last season, so we'll take a sniff.

Next we'll narrow down the field and take a closer look at the few players that can make a plausible case as top-4 NHL defensemen at this point: Hainsey, Gilbert, Kuba, and Zanon. We'll include Erskine to see how the potential replacements stack up with the incumbent. Via BehindtheNet, some numbers:

And since we like doing that Usage Chart thing, here's one from last season (via Hockey Abstract): 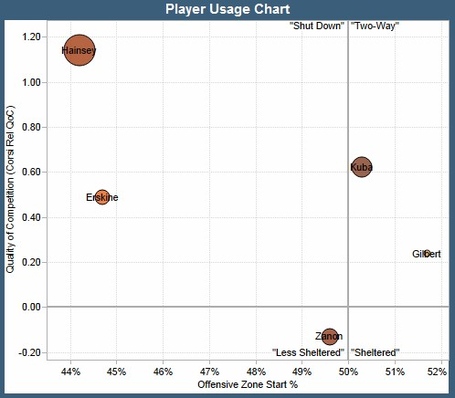 You'll notice right away that the field of potential 4D upgrades all compare favorably to Erskine. The only year in which Erskine's Corsi numbers are on par with the competition is 2011-12, when he was playing third pair minutes and the easiest competition of any player-year in this sample. Once Erskine was put into a top-four role, he got dominated, sporting the worst Corsi On that you'll find in the table above. If he didn't also have the best PDO you'll find in the table above, he'd look like an even worse option at 4D. However, as noted above, being better than Erskine isn't the bar we are trying to clear, so we can make a couple cuts at this point.

Throw out Zanon because he's played the easiest competition of the group and based on his Erskine-esque Corsi On last season (and an even worse Corsi Rel) it looks like he's slowing down. Throw out Kuba because he's old and despite being paired with (and having his numbers buoyed by) Erik Karlsson in 2011-12, he was unable to get a contract offer from Ottawa, then went to Florida where he was passed on the depth chart by younger (but by no means exceptional) players, and eventually earned a buy out from a GM that has no problem overpaying veteran players just to reach the salary cap floor stay competitive. That leaves us with Hainsey and Gilbert.

The two are virtually identical. They both played about even quality of competition, and they had similar zone starts (it should be noted that it looks like Gilbert's increased offensive-zone start percentage last season was a result of Ryan Suter and Jonas Brodin joining the Wild and taking most of the defensive-zone draws, and in Suter's case most of the offensive-zone draws as well; Gilbert took fewer in-zone draws last year, in aggregate). Both players have been on the top-two defensive pairs each of the last two seasons (Gilbert was top pair in '11-'12, and second pair in '13 when Brodin and Suter arrived; Hainsey was second pair in '11-'12, and then top pair last year when Tobias Enstrom went down). In points-per-60 over the last two seasons they are indistinguishable. Gilbert is a bit stronger at IPP/60 (though Hainsey has the edge in IGP/60), but neither player is anywhere near the ranks of the elite, nor would they be expected to drive offensive output in their role with the Caps. Both players would be a great fit to play alongside Carlson (and they're both American, [heck] yeah) and would immediately make the Caps top-4 defensemen much more imposing (from a quality of play standpoint, if not toughness and punching).

Ultimately, since either guy would be entirely acceptable (more than acceptable, really) I'm not going to hitch my wagon to either one. With so many NHL players still available, it's a buyer's market. There's no reason to reach to land either guy. Play it cool, offer them both a contract that you (meaning George McPhee) are comfortable with, and see which guy cracks first and accepts less money than they want. If one of them signs with another team, then turn the heat up a bit. It's unlikely that this is a priority for the Caps, especially while Marcus Johansson is unsigned, but there are a couple quality options available should the Caps look to upgrade their defensive corps. [Edit: Since Gilbert is a righty, that leaves Hainsey as the quality 4D left, so once the salary cap picture is clear, he should be the focus of any attempted upgrade on D.]

@JapersRink What does MoJo have to do this year to prove he's a top 6 forward while he's riding along with 8 and 19? #JapersMailbag

The simple answer to this question is that if Marcus Johansson wants to prove he’s a top-six forward, then he needs to continue to produce like one (as he did in 2013, particularly after returning from his concussion). The fact that there are still questions about whether Johansson is a top-six forward tells you that production isn't the only thing he needs to do to convince fans, at least if he's going to be playing with Alex Ovechkin and Nicklas Backstrom (the same production with, say, Brooks Laich and Troy Brouwer would be more persuasive... and unlikely). The second part of the question, however, pries from me a different answer. "Riding along" with Ovechkin and Backstrom, Marcus Johansson doesn’t necessarily have to produce like a top-line forward (which is really what we're talking about if he's out there with 8 and 19). He pretty much just needs to stay left-handed and keep up his strong post-concussion possession numbers - he can't cost the top line valuable offensive opportunities. If he can continue his strong possession play from the end of the 2013 season, he should have top-six production numbers, but may start to quell the claims that he's a passenger (or worse, an anchor) on the top line.

Last year, on the surface, Ovechkin and Backstrom were a two-wheel ice-slicing Harley Davidson motorcyle, and Marcus Johansson was the spare tire affixed to the tail (I know that motorcycles don’t zoom around with spare tires, but shut up and indulge the metaphor). As we touched on last year, Alex Ovechkin, under the tutelage of Adam Oates, committed to a new attack plan - one where he does not carry the puck into the offensive zone, leaving the puck-carrying to his teammates. Johansson is on a line with one of the finer playmakers in the league in Backstrom, and arguably its best finisher in Ovechkin. If the most important thing Johansson does is continue to be effective at bringing the puck through the neutral zone and across the blue line (drawing penalties along the way), so be it - that’s a healthy contribution so long as his linemates are fulfilling their roles to expectation. If Johansson can succeed in this respect, getting the puck through neutral and into the offensive zone, the possession numbers should be strong. If not... what's he adding to the line? 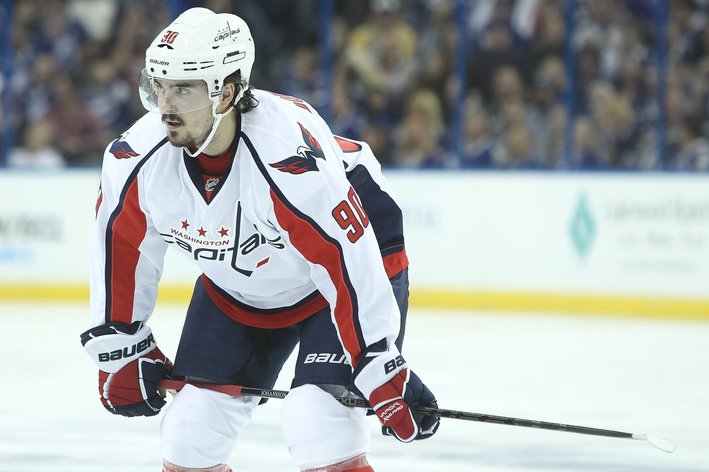 A look at the Caps' last remaining restricted free agent

However (of course, there’s always a "however"), while it is reasonable to expect Backstrom and Ovechkin to remain the driving force behind offensive production, it is not reasonable to expect them to click along at vortex scoring rates all season. It is during these lulls when Johansson could do with a bit more oomph to his game. Which is to say, he should shoot. At five-on-five in 2013, Johansson only attempted 43 shots (3 goals, 29 saves, 11 misses). (For perspective, Matt Hendricks and Wojtek Wolski each had 42 shots that were saved.) Of all Caps forwards who laced 'em up last season, only Mike Ribeiro fired pucks towards the net less often than Johansson at fives. Having your least prolific shooter on your top line is certainly, um, unconventional, and probably not by design (though of course Johansson did not spend the entire season atop the depth chart).

So, in summary, if Marcus Johansson wants to prove (to somebody or something other than the organization, that is) that he’s a top-six forward in talent as well as function - that he has, indeed, arrived - he could probably start by putting some pucks on net, because, ya’know, top-line wingers usually do have that propensity. If "riding along" is all we expect, then he just needs to continue being an effective puck-carrier, giving his linemates the freedom to utilize their offensive genius.