Our first question this week is about Riley Barber's development and when Caps fans can expect to see the Miami University RedHawk in Capitals red (or Hershey's chocolate-and-white):

@JapersRink how many years is Riley Barber away from challenging for a spot?

Barber, a Pittsburgh-born prospect (and son of former NHLer Don), is coming off of a tremendously successful freshman season in the (now defunct) CCHA for the RedHawks. The six-foot, 194 lb. right winger was named the League’s Rookie of the Year this past season, averaging just under a point per game in 40 contests (15 goals, 24 assists). Barber plans to skate for the 'Hawks again in the 2013-2014 season and hopes to build upon his excellent first year under head coach Enrico Blasi. Another year of NCAA hockey should allow Barber to continue his physical development alongside his on-ice accomplishments, the college hockey schedule allowing for plenty of time for workouts and training within the season.

If Barber’s success since being drafted by Washington in the sixth round of the 2012 NHL Entry Draft (167th overall) continues through another NCAA season and the World Junior Championships, we may see him skating in the Capitals’ organization as soon as the outset of the 2014-15, but perhaps more likely not until 2015-2016 or later. It wouldn’t be a stretch to imagine Barber foregoing his remaining NCAA eligibility at some point by signing a professional hockey contract before his four years at the Miami University are finished, as many young and talented Division 1 players elect to do, but the Caps aren't going to pressure the kid:

"We like the way he’s developing," Caps general manager George McPhee said. "Our approach with all the college players over the years has been we’re never going to come to you to talk to you about leaving school or anything like that.

"Stay where you are. That’s the way we approach this. We love the way he’s developed. He’s good there for another year and then we’ll see what he looks like at the end of next year."

If and when Barber decides to make the jump, you can bet that McPhee and team will be eager to evaluate the young man while skating for Mike Haviland’s Hershey Bears. From there Barber will have the opportunity to force the Caps' hand and make GMGM find a wing slot for Barber... even if he did grow up a Pens fan.

Next up, a question about Aaron Volpatti:

@JapersRink Why oh why did Aaron Volpatti get an extension over Hendy? Useless in shootouts and didnt really deliver this past season.

Aaron Volpatti was signed to a two-year contract extension worth $1.15 million in late April by McPhee while fellow bottom-six forward Matt Hendricks played out the final season of his own two-year contract before signing a four-year deal with the Nashville Predators as a free agent that will pay him $1,850,000 per season. 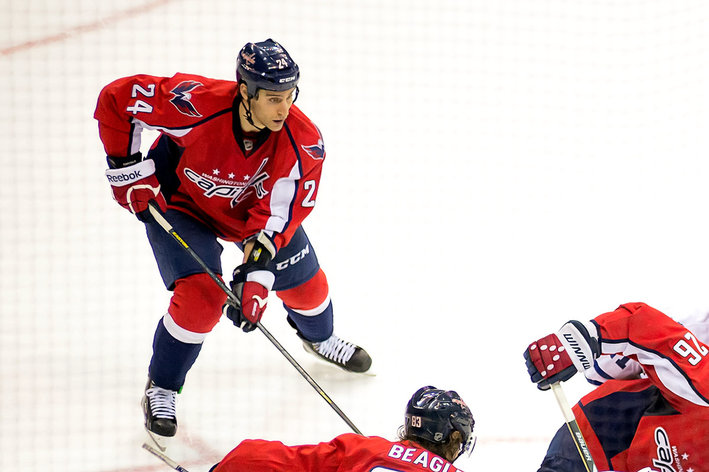 Hendricks is the more talented player of the two and his new contract from former Caps GM David Poile confirms that truth. While George McPhee might have been able to keep the hard-nosed winger for a bit less by inking an extension before free agency began, McPhee and his team opted instead to let the fan favorite walk (a decision they'd made around the trade deadline, and prior to re-upping with Volpatti).

The Capitals lose a home-run shootout specialist, lovable pugilist, decent penalty-killer, and oft-noted strong leader, but have saved more than a million fourth-line dollars per season (which matters when they have a $3-million Joel Ward skating on the line) in exchange for those assets. Bottom-six forwards on NHL rosters are often a collection of moving and interchangeable parts, as Caps fans may have observed with the revolving door of wingers this past season (Volpatti, Joey Crabb, Eric Fehr, and Wojtek Wolski), and in previous years (Matt Bradley, David Steckel, Boyd Gordon, etc.), so while the loss of Hendricks may sting a bit in next year's shootouts, and his leadership will be missd, the team regains a bit of financial flexibility and avoids over-committing to a player who, frankly, isn't a particularly effective player, and certainly doesn't have a unique skill set. While we'll all miss the leadership attributes Hendricks displayed every night, Volpatti can occupy the pugilist role just as well (if not better), and it's probably a decent bet that he'll pick up some penalty-killing duties, too. And ultimately, whether or not Volpatti flops, that 12th forward spot won’t be the straw that breaks the camel’s back skating nine or ten minutes a night.