Is Adam Oates Handcuffing Alex Ovechkin on the First Line?

Alex Ovechkin has seen every single left-handed winger on the active roster line up across from him at some point this year. But what about the righties?

Share All sharing options for: Is Adam Oates Handcuffing Alex Ovechkin on the First Line?

These aren't simply the names of the bloody-lipped, broken-nosed, busted-knuckle gang that you might expect to comprise the bottom ranks of a good hockey team. In fact, for a good portion of this season, these men have been running mates to Alex Ovechkin - he who is in the rarefied air of those who have scored 350 goals before the season of their respective 27th birthday expired.

Combined, the aforementioned skaters have scored a grand total of 168 goals in 1,163 man games played (and only 49 goals in 472 man games if you remove Chimera from the equation).

The obvious question here is why?

Back in January, with the season was a mere nine days old, Adam Oates explained his unorthodox linemates for Ovechkin (Crabb was his opposite winger at this point, Jay Beagle his pivot). "I like having North-South guys with him," Oates explained. "Maybe sometimes with the other guys they might try and get too creative...I think playing with Joey and Beags, they're going to go north more."

Besides Oates's North-South explanation, one cannot ignore the coach's infatuation with keeping a left-handed shot opposite of Alex Ovechkin, a righty on the right wing.

Last season, Oates participated in Ilya Kovalchuk's successful transition from left to right wing. Kovalchuk spent the majority of his time opposite Zach Parise, a left-handed shot, though exceedingly more offensively inclined than any of the players with whom Ovechkin has skated this year. Let's take a look at how the Caps captain has done with those port-siders (data via HockeyAnalysis.com):

CF% is Corsi For%, essentially a measure of puck possession - above 50% means possession is in the player's favor; CF% Δ here refers to Ovechkin's CF%, and a negative number means that Ovechkin has a higher CF% without the given linemate

Now, here's how he stacks up opposite a right-handed shot.

Note: Joey Crabb was not included in the above analysis. Though Crabb and Ovechkin have spent over thirty minutes on the ice together, Crabb played RW and Ovechkin LW, thus making it not applicable here. In case you were wondering, suffice it to say that the numbers are hideous.

It should go without saying that (really) small sample size caveats apply here. The season is only 28 games old, and Ovechkin hasn't played all of them at right wing. Ovechkin's even-strength time on ice with right-handed wingers is a particularly tiny sample, but that's a product of Oates's line management. So, keeping in mind that Ovi's statistics with righties are somewhat volatile, let's dig a little deeper.

Ovechkin averages one point per 41 minutes of ice time with a left-handed winger opposite him. When Ovechkin has a right-handed shot across from him, he's averaging a point in every 12 minutes of even strength ice time. 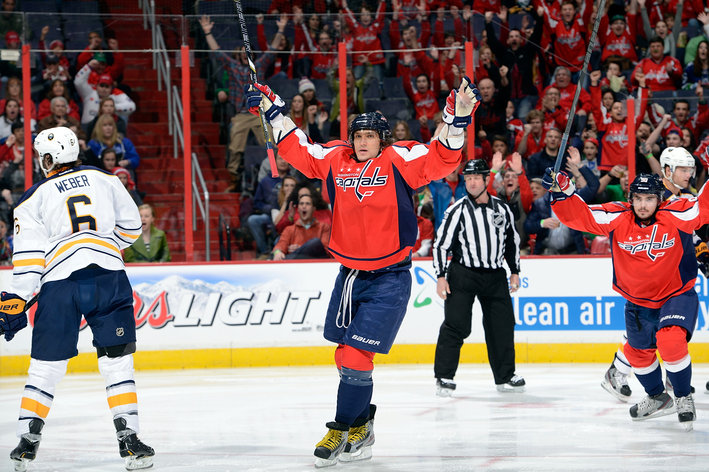 It's obvious from the numbers above that Ovechkin has thrived in extremely limited ice time with Eric Fehr, who, as we've noted in the past, has been critical in driving play and producing points. Though he's only spent about 3% of his even strength TOI with Fehr, he's accumulated 25% of his even strength points during that time. And this, perhaps, should come as no surprise if you've been paying close attention. Alex has always played well with Fehr.

The Great Eight has played just as well in extremely limited minutes with Joel Ward, though without the points to show for it.

Even honoring the knowledge that the numbers are potentially slanted, conventional wisdom leads one to believe that the promise found within them would lead to further on-ice exploration. It has not been so.

Oates has said on numerous occasions that Brooks Laich— indeed, a left-handed shot, and a North-South guy to boot— is an ideal solution for top line left wing. Well, ideal being relative to the roster composition. But is Oates sacrificing talent by not giving guys like Ward and Brouwer, who are in a somewhat similar mold as Laich, a shot opposite Ovi simply because they are right-handed? (Granted, all this may become moot when Laich returns, if the jack of all trades can play first line left wing under Adam Oates as well as he changes tires or plays guitar.)

But why speculate when we can go straight to the horse's mouth, so to speak? When asked whether playing with a left-handed shot opened new looks for him, Ovechkin told us, "It's situational. Everybody has to be involved. It doesn't matter who is there... the most important thing is to control the puck in the offensive zone."

Marcus Johansson, who has been the most recent top line flavor of the week, was similarly dismissive of the notion. "I don't know," he said. "It's hard to say. He [Ovechkin] seems to find space anywhere."

Troy Brouwer had the most to tell us on the matter, though he spoke from the perspective of somebody playing on the right side of the ice, not as Ovechkin's linemate. "Not necessarily," he responded when asked if an opposite-handed shot changed the flow of the offense. "Guys are all over whenever the puck drops. You're supposed to fill positions instead of a set spot. A lot of times you come over to the other side of the ice and you're on your off wing anyway, so it really doesn't make a lot of difference." 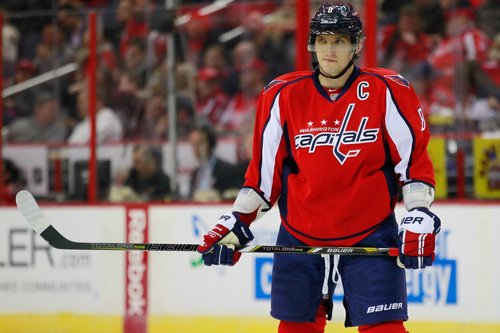 So what conclusions can we draw from the above data? Well, amongst the forward ranks, Ovechkin seems to up his game when he's paired with either Wolski, Fehr, or Ward. Wojtek Wolski, for whatever reason, has been conducting flavor comparisons of the popcorn in various pressboxes.

As evidenced by their miniscule shared ice time, Oates doesn't willingly put Ovechkin with Fehr or Ward. What time they do have together is more than likely a result of shift overlap, Ovi double shifting, or desperate line juggling when offensive futility rears its ugly head. As Ovechkin said, possessing the puck in the offensive zone is the most important thing, yet he is currently being kept away from the three wingers who do this most effectively.

We're all on record voicing our approval of Adam Oates. Certainly his preference for a left-handed shot at left wing is not unfounded. But by continuing to prioritize the handedness of a player rather than his skillset, Oates has us wondering if the tail is wagging the dog.