Share All sharing options for: Playing to Alex Ovechkin's Even Strengths

For the first time since February, 2007, Alex Ovechkin has gone ten NHL games without scoring an even-strength goal. To put that in perspective, over his career Ovechkin has averaged just over four even-strength goals per ten games (a number which drops to a bit over three over his past two relatively - emphasis on relatively - goal-starved seasons).

And while the current drought makes for an eye-catching stat, it's indicative of the even-strength threat that Ovechkin is right now. Beginning in 2007-08, Ovechkin's even-strength goal production has dropped from 43 to 36 and 37 over the next two seasons to 25 over each of the past two (which, it's worth noting, is still good for fifth in the League over the 2010-11 and 2011-12 seasons). His even-strength assists have fallen off somewhat similarly, and he's gone from 3.00 points-per-60-minutes at five-on-five to 3.70 in the team's amazing 2009-10 season to 1.77 last year and just 0.58 so far in the still-young 2013 campaign.

To be sure, part of that is on the team (though obviously there are chickens and eggs to consider), one which has gone from run-and-gun to run-and-hide to... well, we'll wait and see. Here's a look at the Caps' shots-for and shots-against per sixty minutes of ice time over the last five-plus seasons (via Behind the Net, of course): 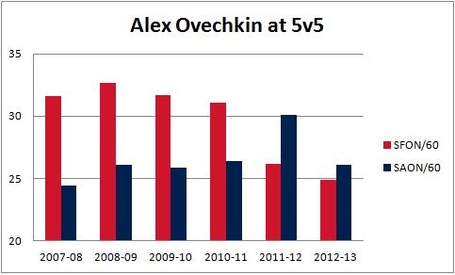 They've gone from dominant to dominated, with the jury obviously very much out on this season. But at least they're better at even-strength with Ovechkin on the ice, right? Not quite as much as they used to be. Here's what the Caps' five-on-five shots-for differential has looked like over that same span when Ovechkin has been on the ice (red) and off (blue): 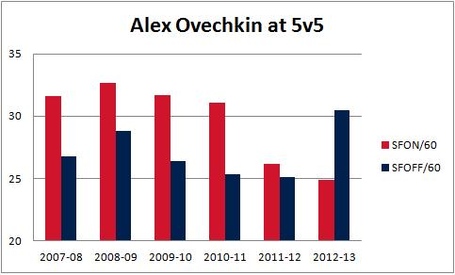 Oh, hey Jay Beagle and Joey Crabb as linemates. Basically, the Caps used to be much better with AO on the ice than when he was off, but that gap narrowed last year and has reversed this year (but take this for what it's worth, not only on sample size, but in terms of the context it lacks, including linemates, zone starts, competition, etc.).

All of that is the "what," and what might be even more troubling is the "why." 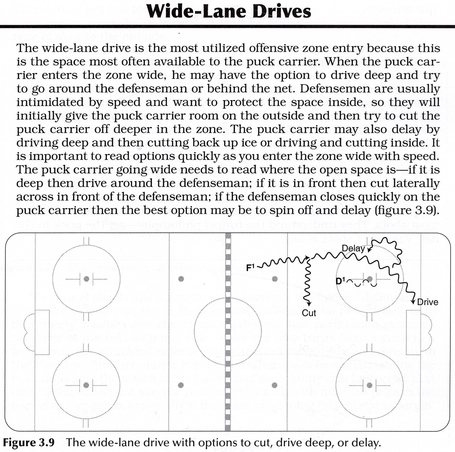 Look familiar? That (via Hockey Plays and Strategies) was a huge part of Ovechkin's road map to NHL superstardom, delivering highlights (like this one in the playoffs against the Rangers or this one against the Sabres) that Caps fans remember as if they'd just happened last night.

Except they didn't just happen last night. And they haven't really been happening regularly for a while now. Here are Ovechkin's 2011-12 regular season goals - count how many are scored on wide-lane drives:

But while there are some instances there where Ovechkin vs. The World worked (and no doubt more where it worked and resulted in an assist or just a high-quality chance), that's just not how he scores any more... if it ever really was. And yet, we've seen - literally for years - Ovechkin's over-reliance on carrying the puck himself rather than taking full advantage of his teammates (Internet hilarity aside). So while Adam Oates's best intentions to turn Ovechkin into a more "north-south" player by playing him with grinders, the result is likely just reinforcing his top sniper's worst habit - a stubborn refusal to pass the puck to less-skilled linemates... because they're all less-skilled linemates when you're Alex Ovechkin. Oates should give Ovechkin a playmaking center, stat (our long-stated preference is Mike Ribeiro), on the condition that Ovechkin actually uses him. Otherwise, why bother? It's not quite as simple as "give him better linemates," though that's certainly a start.