Dmitry Orlov, Tomas Kundratek and Karl Alzner highlight our first installment of "you ask, we answer"

We get asked a lot of questions here on the site, on Twitter, via email and even on Facebook, and rather than keep all the good ones to ourselves, we figured we'd give 'em quick answers here and let you guys chime in with your own thoughts in the comments - sort of a community mailbag. Here we go...

Hey @JapersRink, what did you think of the decision to drop Orlov and Kundratek? Justified?

Yeah, that's an old question (happy one month birthday!), but a good one. Each of those guys had his season sidetracked by injuries, Dmitry Orlov before the NHL season started and Tomas Kundratek in mid-March (yet he still played more than half of the Caps' regular-season games... I'd have bet the under).

When Orlov returned, he was a bit tentative and sent to Hershey to work his way back to NHL game shape and either never did so or, if he did, the Caps were too busy winning to mess with what they had going here. Kundratek didn't get another look in D.C., despite doing a pretty decent job when he was here earlier on. Both men got plenty of playing time in Hershey down the stretch and into the playoffs. 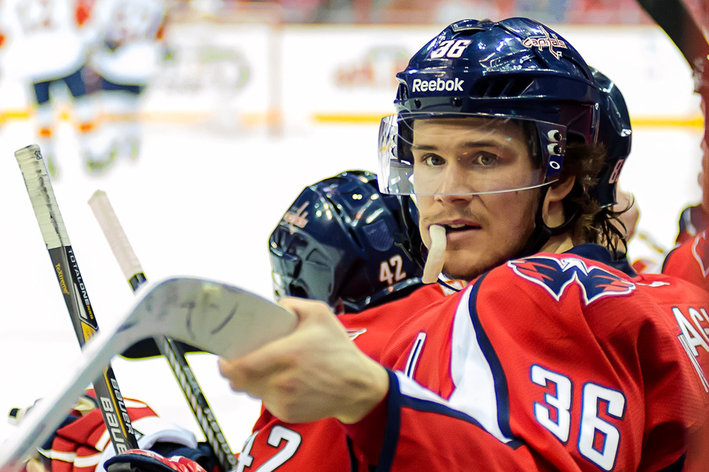 As to what the future holds, Kundratek is a restricted free agent and (if I'm not mistaken) subject to waivers, so he's probably got a good shot at making the team out of camp. As a right-handed defenseman, he's going to have to beat out Steve Oleksy if he wants a regular spot in the lineup (because he's not beating out Mike Green or John Carlson, and we know how important it is to Adam Oates to have a righty and a lefty in each pair).

Orlov is in some ways a bigger question mark. He has top-four tools, and could slot in nicely opposite Carlson if his game is back to where it was in 2011-12 (and that would address a gaping hole in the roster on the cheap, allowing the team to spend assets elsewhere). But that's probably a bit optimistic for now (and the team is going to make him earn whatever he gets), and a third-pairing role is likely a better fit... as it is for John Erskine, Jack Hillen and (as of this moment, at least) Jeff Schultz. (Update: The Caps have put Schultz on unconditional waivers with the intent of buying him out.) One would think that Orlov is also among the most attractive trade chips the organization holds these days, so that's something to consider as well.

So to answer the question, despite some obvious blueline struggles in the playoffs, everything leading up to it from Kundratek, Orlov and the team (not to mention contract situations) made the demotions justifiable, but I'd expect these two players to get more of a shot in the NHL in 2013-14.

@JoeYerdonPHT @JapersRink Unless the offer was so exorbitant that WSH couldn't fit it under the cap?

Could the Caps receive an offer sheet for Alzner that puts the Caps in cap trouble? Another older question, but a topic that causes Caps fans some anxiety, since Restricted Free Agent-to-be Karl Alzner isn't yet signed. 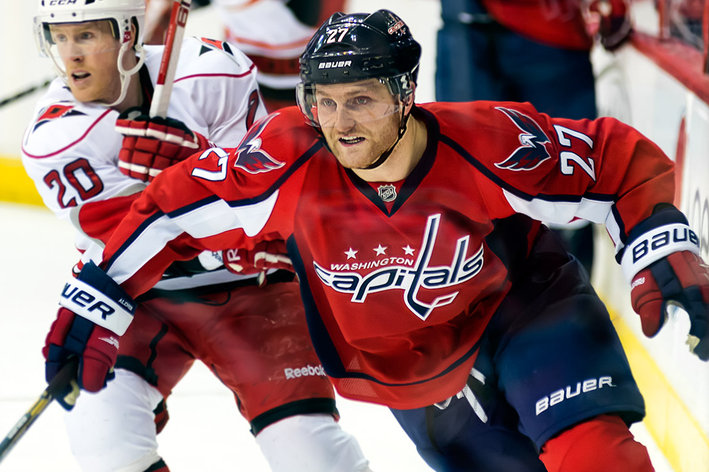 At present, the Caps are more than $5.5 million under the salary cap of $64.3 million, and teams are allowed to exceed that upper limit by ten percent during the off-season. So there's plenty of room there for Alzner, whose next contract should pay him in the neighborhood of $3-$3.5 million annually (and it's a big neighborhood, but you'd think it starts at Schultz's $2.75 million), depending on the term that goes along with it.

Might a team offer him more than that? Sure. But George McPhee would almost certainly match anything reasonable, and it's hard to see anything unreasonable coming Alzner's way, given the cost (remember, someone has to actually think Alzner is worth the dollars and the compensation it would take to pry him away from Washington). It's nearly impossible at this point to come up with a scenario in which a team offers Alzner a deal that both makes sense for that team and that the Caps wouldn't match for their top defensive defenseman. McPhee simply is "not going to allow other clubs to determine who’s in [his] lineup and who’s not in [his] lineup." They'll lock Alzner up, and fellow RFA Marcus Johansson, as well.

We've got a bunch more questions that we'll be getting to a couple at a time over the summer, and if you've got something on your mind, go ahead and ask it. It's a long summer and there are a lot of question marks around this team... so let's talk about as many of them as we can.

(Oh, and if you have non-hockey questions, we'll entertain those as well.)