Is Marcus Johansson finally living up to the expectations that come with his first round draft pick status, or is he catching a free ride on the Ovechkin/Backstrom freight train?

Share All sharing options for: Has Marcus Johansson Finally Arrived?

In the first nine games of his 2013 campaign, Marcus Johansson registered exactly one point— a goal scored on February 5 in a loss to Toronto. Worse yet, he managed only four shots on net during this stretch.

For a first round draft pick, expected to be a top-six forward on a perennial playoff team, disappointing didn’t even begin to cover the breadth of Johansson’s foundering.

Starting in early February, Johansson missed over a month of time with the ever-ominous "upper body injury" (which indeed turned out to be a concussion). When he finally returned, his surprising slotting on the top line seemed an act of desperation— evidence of a coach with a thin roster looking for an answer across from his converted superstar right wing.

Since returning to action on March 10th against the New York Rangers, Johansson has notched 17 points in 18 games, vaulting his points per 60 minutes of ice time at five-aside to a gaudy 2.48, trailing only fellow countryman Nicklas Backstrom’s 2.52 on the team. And those four shots in nine games? A distant memory. Johansson has been pulling the trigger with relative reckless abandon, tossing 28 pucks on net in his past 18 games. Not prolific by any means, but a giant step forward. Sounds a bit more in the ballpark of what George McPhee likely envisioned when he drafted the Swede with the 24th pick in the 2009 entry draft.

The supposed foil to the illumination of Johansson’s success is that Adam Oates, working his Adam Oates magic, dumped a few shovelfuls of coal into the fire of the Alex Ovechkin and Nick Backstrom train, and Marcus is just along for the ride.

But referencing usage charts from earlier points in the season (February 4, February 24, March 20), we can see that Johansson has not only improved his puck possession numbers, but that the improvement has been sustained over a considerable— relative to the length of the season— period of time. And, even if he is being carried along by Ovechkin and Backstrom, he is at the very least no longer weighing them down. 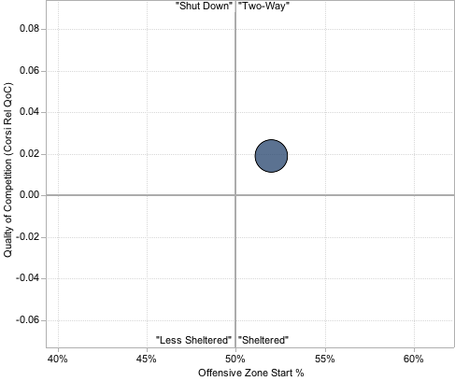 Perhaps more important than the fact that Marcus Johansson has turned his giant red circles into a blue one is that Johansson has been thriving in close game situations ("close" meaning during a game that is tied, or is within two goals during the first or second period). In fact, only Nicklas Backstrom has been better in D.C. over those past 18 games. Remarkable, given Johansson's early performance in the same scenarios.

But Johansson isn’t exactly sitting idly by while Backstrom does all the work. Backstrom does in fact have more primary assists/60 than Johansson, but he and Mathieu Perreault are the only two skaters who have played more than 10 games, who can boast that claim. He’s also fourth on the team in penalties drawn per 60 - a valuable contribution to a team that flaunts the League’s most potent power play, and a happy byproduct of Johansson’s skillset. Which leads us to a bit of more qualitative analysis…

Johansson’s speed and puckhandling ability are utilized particularly well on a line with Alex Ovechkin, largely because of the captain’s newfound dedication to not carrying the puck into the offensive zone. Adam Oates touched on this earlier in the week, speaking with CSN’s Chuck Gormley, when he said, "He’s letting Marcus and Backy lead the rush instead of him being a bull in a china shop."

Carrying the puck is no foreign task for the young Swede. He did so with considerable frequency under both Bruce Boudreau and Dale Hunter. What he didn’t have then were an Alex Ovechkin and Nicklas Backstrom that commanded the same kind of respect they do right now.

The attention that Johansson’s linemates demand from opposing defenses gives him a little bit of extra ice, allowing him to avoid being immediately knocked off the puck in the a fashion that had become all too familiar.

So has Marcus Johansson finally arrived after two seasons worth of growing pains under bright lights and high expectations?

The captain seems to think so. "You know, every time in [your] first year and second year, of course you don’t have experience," Ovechkin told me after the Capitals' Thursday night victory over the Carolina Hurricanes. "He’s grown up like a pro, like a person, and you can see. He makes great passes, and his ability to skate is unbelievable."

"He’s grown up like a pro, like a person, and you can see. He makes great passes, and his ability to skate is unbelievable." - Alex Ovechkin on Johansson

Adam Oates was similarly complimentary. "Since he’s come back from injury he’s really helped our team. He’s playing like the guy I saw on video last year. And he’s obviously got a connection with Alex and Backy."

Not bad for a guy who’s been largely considered a disappointment until recently. Maybe there’s something to that patience thing after all.

Marcus Johansson is going to have to prove he’s a first-line talent for clips far great than twenty-five games, and he’s going to have to do it when Ovechkin and Backstrom aren’t quite so hot. But if he does pan out as a top-liner - if he has truly matured, adapted, grown as a forward in the National Hockey League, as his teammates and coach believe he has - it’ll go a ways in easing George McPhee’s offseason situation, both financially and strategically.