Share All sharing options for: Alex Ovechkin Finds His Even-Strength

Three weeks ago, we spilled some pixels in this space discussing (or, perhaps more accurately, lamenting) Alex Ovechkin's even-strength shot selection. Since then, Ovechkin has scored 14 goals in 11 games, with half of them coming at even-strength.

So what's working in the resurgence of The Great Eight? Greg Wyshynski touched on some of it earlier today (including the impact of Adam Oates reuniting his top duo of Ovechkin and Nicklas Backstrom), but insofar as even-strength production goes, it all circles back to something we'd written earlier in the season:

[W]hile there are some instances there where Ovechkin vs. The World worked (and no doubt more where it worked and resulted in an assist or just a high-quality chance), that's just not how he scores any more... if it ever really was. And yet, we've seen - literally for years - Ovechkin's over-reliance on carrying the puck himself rather than taking full advantage of his teammates (Internet hilarity aside). ...

Ovechkin needs to spend less time with the puck and more time doing things without it - moving to soft spots in zones, driving to the net for rebounds, and so on.

To wit, let's take a look at Ovechkin's ten even-strength goals (Sunday night's empty netter is excluded because, well, ask Al Iafrate.) Below is a map with each of those goals plotted numerically in chronological order with the encircled number representing the location at which the puck last touched Ovechkin's stick and the squares representing where Ovechkin gained control of the puck immediately prior, as applicable (which is the difference between the blue and the red - the latter involved some puck-carrying, the former were one-timers and re-directs): 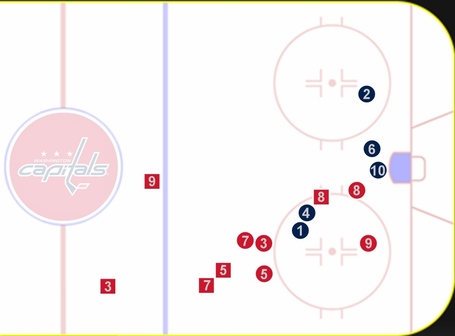 Immediately two things jump out: 1) only twice has Ovechkin carried the puck into the zone and scored (without first losing or giving up the puck), and 2) of Ovechkin's goals from "scoring chance" areas, five of seven came with the puck touching on his stick for only a brief instant (and, really, #8 and #9 here could have probably been characterized as blue). [For quick reference, here are links to goals 1, 2, 3, 4, 5, 6, 7, 8, 9 and 10.]

Now, it's possible that this ratio of "non-carry vs. carry" goals is different than the split in overall scoring chances, but this is our story and we're sticking to it - Ovechkin is having more success now that he's letting others lug the mail and he's going to dangerous spots that he couldn't get to with the puck. Goals #1 and #4 above came off Backstrom face-off wins, one area in which the Swedish pivot provides far more opportunity for the Russian sniper than Mike Ribeiro had. Goals #6 and #10 came on deflections - "in a style he never scored before." And so on.

As we wrote before, if anyone can turn Alex Ovechkin into Brett Hull, it's Adam Oates, and it might just be happening. Oates told Slava Malamud ten days ago, "You can not even imagine what Ovechkin will be capable of next year." Does anyone doubt him?