Some roster inquiries and a big-picture stat question in our fifth installment of "you ask, we answer"

@JapersRink Who would've been the odd man out had Ribs agreed to his 3yr 14mil contract? #JapersMailbag

@JapersRink Let's talk [Mikhail Grabovski]. I think the reason MJ90 resigning is taking so long is due to us pursuing Grabo. Thoughts?

The Caps haven't made any significant off-season UFA additions, so it's hard to simplify the question to a "Ribeiro or the guy who replaced him" level. Marcus Johansson still hasn't signed (despite the available cap space), and Karl Alzner didn't break the bank and plays a different position, so it's unlikely that the Ribeiro departure had any impact on their statuses as Caps going forward. 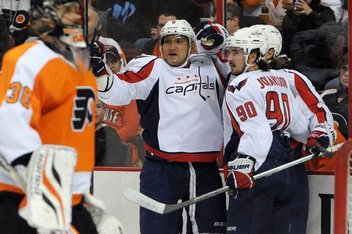 The Caps have a lot of (expensive in places) depth in their bottom-six forwards, so the most obvious candidates would seem to come from that group. Jason Chimera looks like the odd man out on the third line if you look at what he brings to the table based on possession and production (and the fact that they were apparently shopping him around the deadline), but he's a) cheap, which means that he's better relative value, and b) a lefty, which has been paramount in Adam Oates' approach to player utilization (much to our chagrin).

That means that Eric Fehr and Joel Ward look like they are fighting for the same right-wing spot on the third line. Fehr is cheaper with more offensive upside, but more injury-prone. Ward is a better defensive player, and has a reputation as a "playoff player," but costs twice as much as Fehr and is the only player in the lot that comes close to opening enough cap space to make Mike Ribeiro fit. Ward has been more durable than Fehr, though, so moving him to keep a player that still has some question marks isn't necessarily a wise decision. Then again, maybe Johansson or Brooks Laich gets bumped out of the top-six to the third line (either in Chimera's left wing spot or possibly as center), since Ribeiro would be the second-line center and there can only be two left wings in the top-six, and Martin Erat would certainly be one of the two.

Nice problems to have, eh?

But based on statements made by George McPhee (taken with the requisite salt), the Caps weren't taken by surprise when Ribeiro left, and had been making 2013-14 plans at the 2013 trade deadline. The Caps had to have a pretty strong idea that Ribeiro wouldn't be returning when he didn't sign an extension by the trade deadline, and it stands to reason they began making alternative arrangements at that time. Rather than lining up to overpay for free agents during the first week of July, it seems likely that McPhee acquired Erat with the assumption that he'd replace Ribeiro on the second line (though not at the same position), with the added benefit of having both Ribeiro and Erat for one playoff run. Of course, it didn't quite work out as planned due to Erat's injury, but if we accept that the Caps have been planning for the 2013-14 season since before the trade deadline, it appears as though Erat would have been the odd man out if Ribeiro had been willing to sign for $14M over three years when it was first offered. Had he been willing to take that deal earlier this summer, however, the Caps could've scrambled to make it work...

Entertaining the Idea of Mikhail Grabovski 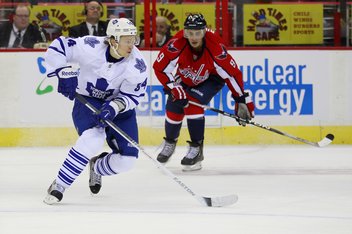 ... which brings us to the next part of the question. At the moment, the Caps have around $5.5 million in cap space for the upcoming season; sounds like a lot, but keep in mind that's for a 20-man roster that doesn't include Johansson (who could come in around $2 million), a 13th forward (Michael Latta, for example, at $786k) and an eight defenseman, if they choose to go with that many (most likely Dmitry Orlov at $900k). Add in those pieces and it leaves less than $2.5 million in cap space. Even if you remove Latta from the equation, is $3 million enough to sign dream-acquisition Mikhail Grabovski? It seems unlikely - so we go back to our "odd man out" question and someone's likely packing his bags.

But would Johansson not being signed impact the team's ability to sign Grabovski? On the one hand, signing Johansson would give the Caps more certainty on their cap situation, and if he's a possible candidate to be traded, he's definitely more easily moved with a contract in place than without one. On the other hand, the Caps have enough room (in August, where teams are allowed to exceed the cap by up to 10%) to sign Grabovski now and deal with the repercussions later. Of course, the team loses significant leverage in trade talks when they have to make a deal versus when they simply want to, but moving a depth player for a bag of pucks to make room for Grabovski is certainly a tolerable result.

Ultimately, I think the two - signing Johansson and Grabovski - are probably pretty unrelated. Johansson has no leverage (other than that the team is somewhat better with him than without him, and that is greatly mitigated if they sign Grabovski), so if the Caps want him and he wants to play hockey in the NHL, he'll be a Cap. Grabovski, on the other hand, can write his own ticket, to an extent. Let's hope he writes it here.

Next up, a question about stats:

@JapersRink in your view, which stat or couple of stats is/are most valuable in evaluating a skater's performance?

I like this question, and the most important thing to note up front is that there isn't a single "Holy Grail" stat that can paint a full picture of a player's value or performance; it takes a handful of metrics before you can even start to get a real understanding of what a player is doing on the ice. Those basically include two pieces - those that amount to performance metrics, and those that add context to the performance.

The first thing I tend to look at (well, after goals and assists because, let's face it - those are sexy, easily digestible, familiar and still pretty darn important) is how a player has been used. What does his time on ice (especially at even-strength) look like? How about his zone starts? Getting a sense of how a coach is deploying his talent (there are quality of competition and teammates metrics as well) adds valuable context when looking at how players are actually performing, which is something we were talking about the other day. After all, coaches act rationally and play their players in ways that maximize the lineup's chances for success... in theory.

Visualizing PDO & Seeing the Forest for the Trees 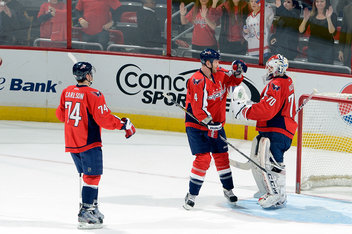 As for performance, I look at a player's relative Corsi rating and percentage for possession; scoring rates and individual points percentage for production; on-ice goals-for and -against rate for a bigger picture; and then to PDO and its component parts for more context (as that can often reconcile when the other numbers don't seem to line up, i.e. a shot-generating machine who isn't scoring or a player who's being brutalized in possession but has solid goals-against numbers).

Oh, and I also use my nose. It's critically important (and sometimes lost along the way) to give the numbers a sniff test. If they don't pass (Did Jay Beagle really face tougher competition than Alex Ovechkin last year? Was Tyler Kennedy really the Penguins' best player?), maybe that metric isn't saying what you think it is or want it to.

Plenty of folks are turned off by the increased prevalence of statistical analysis in hockey, and that's certainly their prerogative (though, really, the influx is more an evolution than it is a revolution). But understanding what's going on beyond what your eyes can perceive should heighten, not threaten, the experience of being a fan. And while it's always nice when the data agrees with your gut feeling or whatever, it's often more interesting when it challenges those preconceived notions and gets you looking at games, teams and players a little differently, all of which can happen without becoming a slave to the numbers.

But that's just my two cents. For more on this subject, I can't recommend Down Goes Brown's take strongly enough, and to see which one stat some of the best and brightest hockey statheads around would pick (if they were limited to one), check out Arctic Ice Hockey... oh, hey there, Mikhail Grabovski...