Tom Wilson's contract and George McPhee's thoughts on his team highlight our third installment of "you ask, we answer"

Our first question this week is about Tom Wilson's contract, specifically his nearly $1.3 million cap hit:

@JapersRink @ngreenberg I never understood that. How is he getting paid so much already?

It may seem a bit curious that Wilson - he of the zero NHL regular season games - would be slated to have a higher cap hit should he be in Washington for the 2013-14 season than guys like Mathieu Perreault and Jay Beagle, but being a first-round pick has its perks. When Wilson signed his entry-level contract (ELC) a year ago, the three-year pact was for the maximum allowable salary ($925,000 at the NHL level for players drafted in 2011 or later), with 10% of that (also the maximum allowed, in this case $92,500) paid out annually as a signing bonus. This is essentially the same deal the team gave Filip Forsberg a few days earlier, with one exception - the amount of performance bonuses included. Up to $2,850,000 in performance bonuses (which are divided into two groups, Schedule A and Schedule B and detailed over at CapGeek) can be included on an ELC, and the player's cap hit, then, is the sum of his salary and performance bonuses divided by the number of years on his deal.

Let's take a look at how that plays out, with Wilson, Forsberg, and their draft's top pick, Nail Yakupov (via CapGeek): 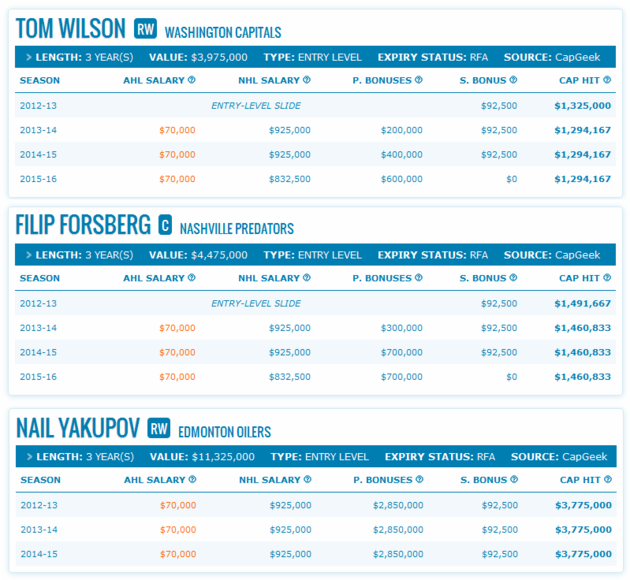 (You'll notice that both Wilson's and Forsberg's contract slid in 2012-13, which means that they didn't appear in enough NHL games to start the clock ticking on their three-year deals, but signing bonuses don't slide (which ends up reducing cap hit by a few bucks, since that portion of salary is no longer a part of Year 3). For more on sliding contracts, see CapGeek yet again.)

What you see is three nearly identical three-year deals in terms of salary and signing bonuses, but differences in performance bonuses (with Yakupov maxed out and the higher-picked Forsberg with more than Wilson) making the difference in terms of cap hit and, ultimately, compensation if those goals are met.

So Wilson's deal - why he's "getting paid so much already" - is really just the cost of doing business with first-round picks (and is actually a lower cap hit than the players selected immediately before him, Cody Ceci and Tomas Hertl, respectively). Now let's hope he hits all of those bonuses when he's in D.C. for good.

Next up, a question about George McPhee:

@JapersRink so do we see free agency activity or trades to fill the holes by GMGM?

GMGM likes his team, but don't take my word for it... take his. As noted, just last week he said, "We like our team. We’re a solid NHL team."

Then again, McPhee has liked his team for quite some time. In fact, here's an incomplete oral history of GMGM liking his team over the past five years:

Of course, every suit in the League declares how much he likes his team from time to time, perhaps none more famously in these parts than when then-Lightning co-owner Len Barrie said in July of 2008, "I'll predict right now, Tampa Bay will win the division. That's how much we like our team." Bruce Boudreau "conceded" the Southeast soon thereafter, and the Bolts went on to... fire their head coach 16 games into the season and finish dead last in the Division (42 points behind the first-place Caps) and 29th in the League overall.

Anyway, does McPhee's public vote of confidence for his squad mean that the Caps' current roster is the same one that will open the 2013-14 season? No, not at all. But despite the holes we've all identified, don't be surprised if the roster doesn't change much between now and October - free agency is largely done, the Caps don't have a ton of room under the salary cap, and McPhee has been somewhat reluctant in the past to move assets in trade (though that's changed somewhat in recent years). After all... he likes his team.