A look at the Caps' last remaining restricted free agent

Share All sharing options for: Marcus Johansson and Asset Management

In his three seasons in the NHL, Marcus Johansson has put up some pretty impressive numbers. His 95 points are fifth-most among players drafted in 2009 (trailing only John Tavares, Matt Duchene, Evander Kane and Ryan O`Reilly, all of whom have played at least 78 more games than Johansson), and he finished sixth in points-per-game among third-year players last year, despite playing (poorly) through a concussion for the first third of his season.

Of course, box car stats have never really been the issue for Johansson, insofar as there have been issues. He's been handed plum assignments at times and forced into roles for which he was ill-equipped at others (and sometimes, somehow, those situations have overlapped), and the 22-year-old Swede has annually increased his scoring rate, from 1.5 points per sixty minutes at five-on-five his rookie year to 1.9 as a sophomore and 2.23 this past season, driven by similar increases in his primary-assist rate (and, it should be noted, a high PDO).

Dig a little deeper, and his game has been improving in other respects as well. His possession numbers have improved each year, he's dramatically bettered his penalty plus-minus (a not-unimportant metric), and he actually finished second on the team in goals-per-60 on the power-play (bet you'd have guessed Troy Brouwer). Moreover, his speed and skill through the neutral zone have allowed him to join Nicklas Backstrom in leading the rush "instead of [Alex Ovechkin] being a bull in a china shop." 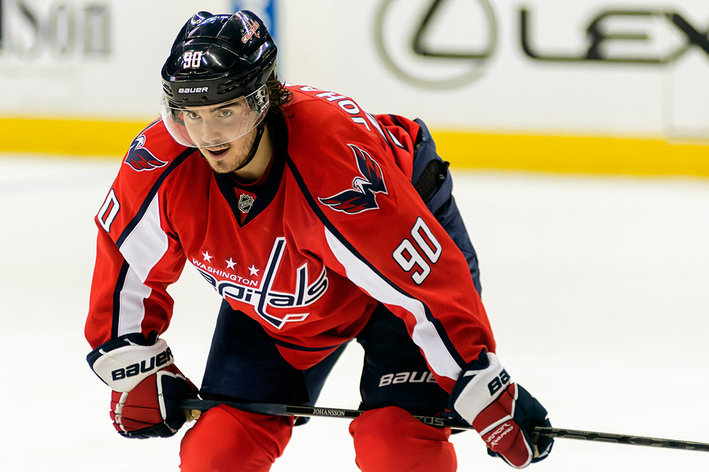 An in-depth look at the winger's season

Yep, Marcus Johansson, once healthy, had a pretty impressive half of a season, following up on two pretty impressive full seasons, his first campaigns in North America. But despite his clear upward trajectory, not everyone is sold on the converted winger. Is he simply a product of playing alongside two elite forwards? Is he physical enough for the rigors of the NHL postseason? (Two points in his last 16 games might suggest otherwise.) What is his ceiling?

Part of the line of questioning stems from expectations. In recent seasons, Caps fans have watched a 22-year-old win the Hart trophy (and win it again the following year), a 23-year-old be named a Norris finalist (twice in-a-row), a 101-point 22-year-old Swede, and a goalie come within a couple of goals of the Conference Finals at 22 among other early bloomers. These successes probably color perceptions of Johansson's relatively (emphasis on "relatively") slow development. Heck, at the end of last season, we were asking whether he'd finally arrived. With more conservative and realistic expectations, it's hard not to consider the 22-year-old who played the best hockey of his career over the season's last two months (and under a new, communicative educator of a head coach, to boot) to be developmentally on track.

But many of the doubts are legitimate. Without Ovechkin and without Backstrom, Johansson's Corsi-For and Goals-For percentages were well on the wrong side of 50%, and it's hard to separate what Johansson has been able to do from the players with whom he's been able to do it. His decision-making is still suspect at times, from ill-advised drop passes to an unwillingness to shoot the puck. And he's not particularly strong on the puck or along the boards (though he's not completely allergic to contact, as evidenced by his five-on-five shot chart and average shot distance). Perhaps what Johansson is now is all he'll ever be in the NHL.

What Johansson definitely is - for the moment, at least - is a restricted free agent, and one who is "believed to be seeking a contract north of $2 million." Is he worth that? Fellow Swede Carl Hagelin recently re-signed with the Rangers for two years at an average of $2,250,000 per coming off a 10-14-24 season in which he played 48 games (Johansson was 6-16-22 in 34). Hagelin plays tougher minutes than Johansson, but Johansson puts up more points. Other somewhat similar and similarly accomplished players signing deals as restricted free agents this summer include Mikael Backlund (two-years, $1.5 million per), Marcus Kruger (two-years, $1.325 million per). That's four players (all Swedes, by coincidence) and Johansson has been more impressive, offensively, than each one... and just ask Karl Alzner how well defensive responsibility pays at contract time.

That Johansson is seeking a contract "north of $2 million" shouldn't seem absurd on the surface, given the market (and for more on this, check out Neil Greenberg's latest at The Post), and given the lingering concerns the Caps (or at least their fans) may have about the player, a two-year deal sounds about right. At best, Johansson continues his progression as a player and becomes a key piece of the puzzle going forward. At worst, the Caps can continue to play him alongside Backstrom and Ovechkin and goose his value in trade the way the Canucks did with Cody Hodgson (though it's hard to imagine McPhee ever being so blunt as to say, "We built him into something we could move.")

Marcus Johansson is 22-years-old and a first-round pick who is already averaging more than a half a point per game as his young career approaches 200 games. He's a valuable commodity, and it is incumbent upon the Caps to get the most out of their asset... whether it's ultimately in their lineup or someone else's.