The Capitals and Penalty Plus-Minus

A look at which players put the Caps a man up... and down.

Share All sharing options for: The Capitals and Penalty Plus-Minus

"[Penalty differentials] are a significant component of a player's value, to a larger extent than is generally appreciated. And capturing, quantifying, and exploiting those things that may be generally understood but are not fully appreciated is exactly how smart organizations get an edge." - Broad Street Hockey

We've discussed "penalty plus-minus" - simply the difference between a player's non-coincidental penalties-drawn and penalties-taken - plenty in the past (ah, the good old days) and have revisited it from time to time because, well, it matters, especially to a team that has shown itself to be dominant on the power-play and the opposite of that on the penalty kill. So let's turn our attention to it again for a bit and see how things shook out in Adam Oates's first (truncated) season.

The chart below (data via Behindthenet) is straightforward enough: it shows every (well, almost every - more on that in a moment) Caps skater and the rate at which he took and drew penalties at five-on-five in 2013, with positive differentials shown as blue bubbles, negative as red, and the size of the bubbles corresponding to the relative size of the differential. Have a look: 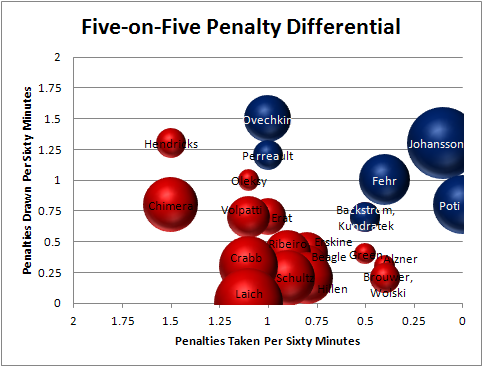 Anyway, penalty plus-minus is yet another thing to keep an eye on going forward, as "how often" tends to get pushed aside in favor of "how good" when folks are discussing special teams. It shouldn't. After all, it's like Benjamin Franklin famously said - "A penalty drawn is a quarter of a power-play goal earned." (That is the quote, right?)