2013 Capitals Defenseman Pairs: The Good and The Bad

Share All sharing options for: 2013 Capitals Defenseman Pairs: The Good and The Bad

Yesterday we took a look at Caps forward pairs (what worked and what didn't in 2013), and today we turn our attention to the blueline. Check out that post for any background that you might have missed, otherwise, let's just dive right in with a look at every pair of Caps rearguards that skated 50 five-on-five minutes together in 2013 (stats via HockeyAnalysis.com; small sample size caveats, etc.; click to enlarge): 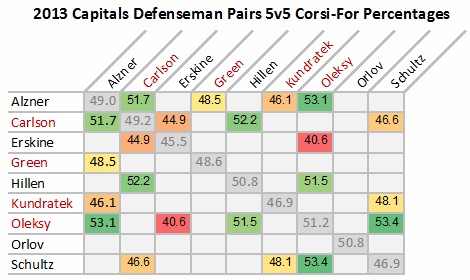 As it was in the forwards post, what you see there is each defensive pair that met the minutes minimum and their Corsi-For percentage (CF%) when on-ice together (or the individual's overall CF% in the gray boxes), with the colors ranging from green to red and corresponding to the ranking among these pairs. Additionally, right-handed defensemen have their names in red, since this distinction has become critically important under Adam Oates, who will rarely skate same-handed blueliners together. So (righty) John Carlson and (lefty) Karl Alzner, for example, were at 51.7%, which was pretty high on the list. And here's a better look at those rankings:

Now, to the observations:

So what we're left with is more evidence for what we've known for a while - the Caps have three strong defensemen, and some decent options for a third pairing and even one or two injury fill-ins (provided it's not to one of those top-three). But John Erskine isn't the answer in that critical fourth top-four spot, and unless Dmitry Orlov is, this team has a gaping hole there that could very well be the difference between making and missing the playoffs.