Straight from the mouth of the General Manager, Brooks Laich will start the year as second pivot. Let's take a look at how he stands up against others of his ilk.

If you love the Washington Capitals, you love Brooks Laich, sure as eggs is eggs. The man does it all. From throwing out the first pitch at an O's game to changing a tire after a brutal loss to sacrificing the well-being of his beloved berries, he's DC's well-worn Swiss (Canadian) Army Knife. He plays wing, he plays defense, and if George McPhee is to be held to his word, Brooks Laich will begin the 2013-2014 as the Capitals latest solution to their perennial second-line pivot issue.

The thing is, at first glance Brooks doesn't seem to fit the mold of a second line center in the NHL. In the world's most competitive hockey league (sayonara, Kovy and Burmy!), the perception of the second-line center is that he is a smooth skater who likes the puck on his stick, possesses an innate awareness of where his linemates are at all times, and has the vision (and hands) to get it to his finishers. And with free agents on the market who have a reputation for these qualities moreso than Laich, his anointment as second line center almost makes it seem like the Capitals' front office is settling rather than making a competitive decision.

But despite Brooks' hard-nose reputation as a grinder, those who watch the team with regularity know he's got an understated offensive flair, and the numbers support it.

Below, I have put Laich's average numbers from his last two healthy seasons up against an entity that represents the "average second-line center on an NHL playoff team." The statistics attributed to this entity were arrived at by taking the cumulative two-year average for the second-line centers of each 2013 playoff teams. 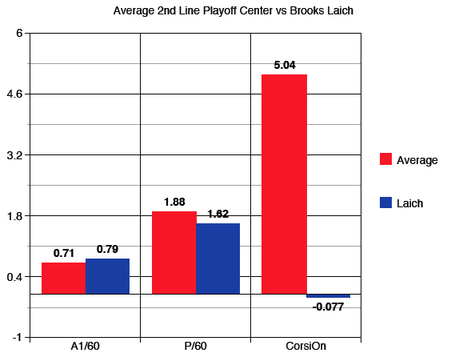 An important quality of a center on a scoring line is his playmaking ability. One way to measure this is by primary assists/60, because it speaks to a player's direct involvement with the goal scorer. This is not to say that a scoring chance cannot be created by the man who touched the puck before the primary assister - or even by a skater who hasn't touched the puck at all - but rather that A1/60 is the easiest way to quantify something like "playmaking" at its basest value, which has become an overused part of the hockey lexicon to the point that its meaning has been obscured. Primary assist/60 is also more repeatable than secondary assist/60, and thus a stronger indication of a player's skill rather than luck.

Surprisingly, Laich's primary assist numbers exceed the average, though not by much. And it's worth noting that his .79 A1/60 mark is buoyed by his team-leading .94 A1/60 from 2011-2012, when more than half of his assists came during spot duty with Alexander Semin and Alex Ovechkin, and most of the rest were the result of outlier production from Jason Chimera. And, of course, Laich wasn't necessarily playing center during this time - though given that his two most common linemates were Troy Brouwer and Chimera, it's feasible to think that Laich's time at pivot was ample.

In terms of overall point production, Laich doesn't quite stand up to the average, but he's in the ballpark. But again, during the seasons from which his numbers were calculated, and especially in 2010-2011, Laich saw a lot of Alex Semin. Unless there is drastic change on Washington's roster between now and opening night, he'll have no such talent at his hip in 2013-2014.

And, of course, possession. Here the difference between Laich and his second line center brethren is most stark. While this shouldn't be too disconcerting - Brooks has only been a negative Corsi player once since BtN began keeping track of the metric in 2007 (though that -7.49 mark was during his most recent campaign) - it does bear noting that Troy Brouwer and Martin Erat were victims of a possession sinkhole in Mike Ribeiro last season, and a successful second line is most certainly one that spends most of its time on the right side of center ice.

Based on these averages, yeah, maybe Brooks will work. Or maybe the numbers are misleading because Brooks' stats were achieved in a very different situation (and often times position) than the one he finds himself now.

But in the graph above, being a playoff team is the benchmark. Perhaps, after six-consecutive trips to the NHL postseason, it's time to raise the bar. How about to a conference final— that flighty third round of the playoffs that has so far eluded the "Young Gun"-era Capitals.

Below, find the crunched averages of the centers from the four teams who were in the most recent conference finals. 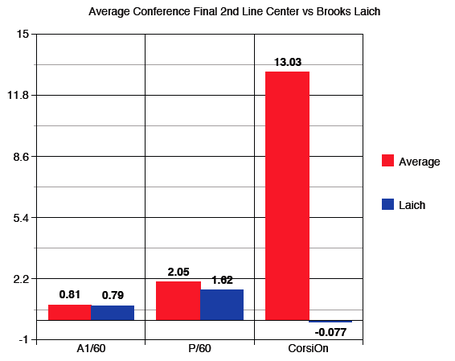 The numbers are a little more noticeable there, and while its not entirely fair to compare Laich to the NHL's best, Capitals fans have long since been dissatisfied with the early round exits.

Perhaps better suited for projecting the effectiveness of a center is his Individual Points Percentage, which is the percentage of goals score by a player's team while that player is on the ice that that player had a point on. I say better suited, because this percentage measures a player's tangible involvement in all goals, not simply primary assists.

From 2010-2012 there were 98 forwards who skated greater than 2000 minutes. Of these 98, Laich had the 61st best (or 37th worst) IPP, tallying a point on only 69.4% of goals for while he was on ice. Troy Brouwer, projected to be one of Laich's wings on opening day, had the league's second-worst IPP, trailing only Tyler Bozak (hey, at least we're not Toronto!). Yikes. That's shaping up to be a hell of a scoring line what with two forwards side-by-side who are inclined to not be involved in goals for. Erat, at least, comes in at a respectable 75%. (It's also worth noting that Laich's IPP clocked in at a better number than David Backes and Mike Fisher, two players who George McPhee referenced when discussing his decision to put Laich at 2C.)

In conclusion, putting Laich at second-line center isn't so far-fetched, but neither is it promising. But can you blame George McPhee for trying to squeeze some more value out of this roster? Laich's $4.5m cap hit is larger than the 2nd line center average ($4.15m), and falls only $600k short of the average salary paid to second-line centers by the teams that made the Conference Finals in 2013 (cap hit data from CapGeek). It's probably not the best allocation of resources if a contract like that is hanging out in third-line winger territory (or hanging out in the press box, which it did for all but nine games of last season).

So, is Laich a legitimate second-line center? We'll find out, but he's sure getting paid like one. Now for that production bit...