From Alzner to Ward, we're taking a look at and grading the 2013 season for every player who laced 'em up for the Caps for a significant number of games during the campaign, with an eye towards 2013-14. Next up, Mike Ribeiro. 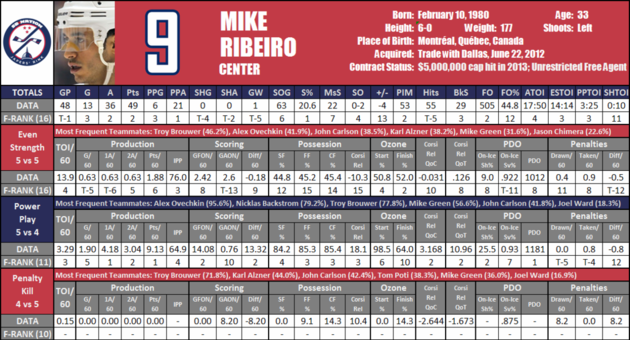 Ribeiro and his most frequent linemates: 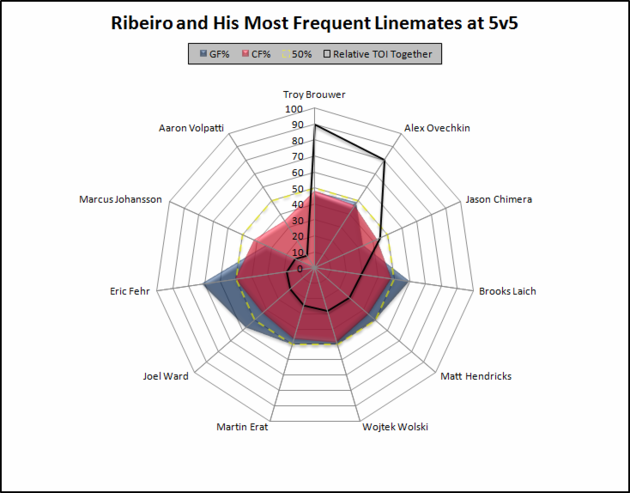 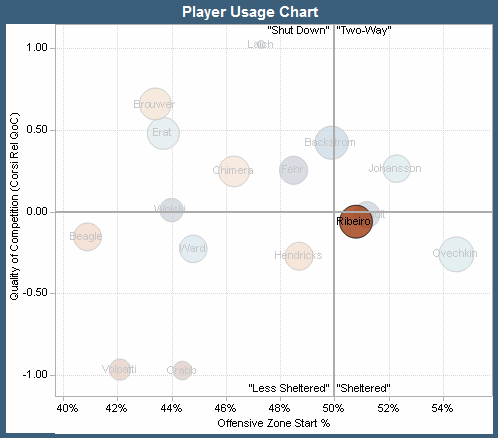 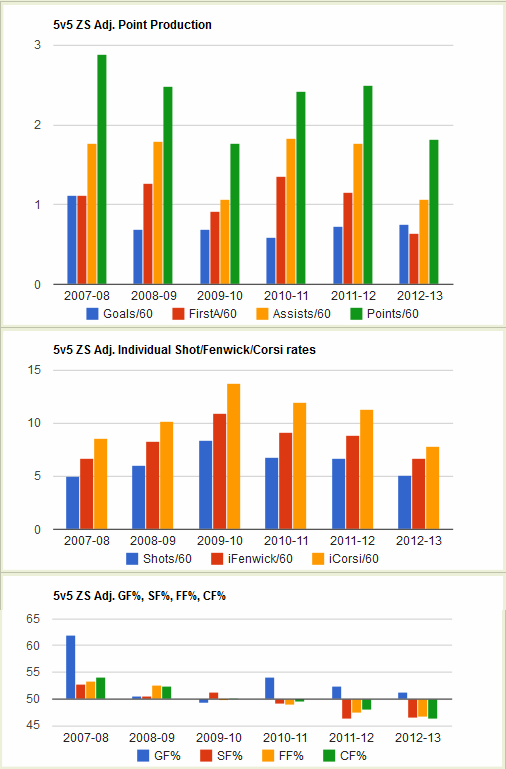 Key Stats: Ribeiro’s first-rate play-making skills and pass-first instincts were on display with the extra-man all season, the center’s 21 power-play assists and 5-on-4 assist rate both comfortably pacing the League.

Interesting Stat: Ribeiro's 16 multi-point games were tops on the team (tied with Alex Ovechkin), two off the League-leader, and just two less than his 0-point games.

The Good: Despite being tabbed the team’s number two center, Ribeiro made the most of the last year of his current contract and produced like a first-line pivot, finishing second on the squad in scoring behind Hart Trophy winner Ovechkin, thanks in large part to his power-play production and team-high (and certainly unsustainable-over-time) 20.6% shooting percentage. The 33-year-old pivot averaged more than a point per outing for just the second time in his career and set a new career high in assists-per-game, finishing with 36 helpers (a 62-assist 82-game pace) that placed him fifth in the NHL, alongside an impressive list of All-Star set-up men (Martin St. Louis, Sidney Crosby, teammate Nicklas Backstrom, and Henrik Zetterberg, four of the top-nine assisters over the last five seasons).

Ribeiro’s play stood out during a nine-points-in-five-games mid-April stretch that was a big part of the Caps’ successful late-season playoff push, the team capturing eight of ten points along the way (and even in that one loss, it was Ribeiro putting up the team’s lone goal in Ottawa). The run carried the Capitals through the month after Backstrom’s scorching hot first week of April got the team going, and the effective one-two punch down the middle that Caps fans had envisioned since last summer had seemingly come to fruition (even if Ribeiro was still doing most of his damage on the power-play) when the team needed it most.

Neither injury nor illness kept Ribeiro out of Oates’ lineup (one of only seven Caps skaters to receive a sweater each and every time out), the lockout-shortened season marking the third time Ribeiro hasn't missed a game over the course of a season.

Then came the playoffs, overtimes, and Ribeiro heroics, first when his fake shot and perfect pass set up Mike Green's game-winning one-timer in Game 2, and then when he ended Game 5 on his own by depositing a rebound behind Henrik Lundqvist. And that would be the end of the good for Ribeiro.

The Bad: Put bluntly, Ribeiro was nothing special at even-strength, despite sharing plenty of ice with the League's MVP (which didn't quite work out as well as everyone might have thought). The Caps gave up more goals than they scored when he was on the ice at five-on-five, and his possession stats were fairly atrocious, with the team hemorrhaging shots-against when he was on the ice. (Put another way, he had a negative goal differential, despite a high PDO... not easy to do unless you're getting killed in possession.)

As a top-six center, Ribeiro saw the face-off dot often, his 505 draws second on the Caps to Backstrom, but his 44.8% success rate could certainly be improved upon (and his struggles there certainly didn't help his and the team's possession numbers). Ribeiro also didn't shoot the puck all that much (apparently Ryan Callahan didn't get the memo), and while that's not his game, his 1.31 shots per game were his lowest rate since before the lockout. Err, the 2004-05 lockout, that is.

Ribeiro’s 53 penalty minutes was second-most on the team, and he set a personal high in PIMs-per-game thanks in part to his first career fighting major and a pair of ten-minute misconducts. Ribeiro plays with an emotional edge, noticeable in his offensive flair at the best of times and seemingly unavoidable at the worst of times, as his mouth was often going when his offense wasn't. Perhaps fittingly, Ribeiro's season (and maybe Caps career) ended with an early trip to the locker room, hit with another misconduct in the final minutes of the Game 7 embarrassment (a game in which he had a minus-four rating).

And while his personal highlights for the series that were touched on above were great moments, Ribeiro’s overall production (like that of so many of his teammates) took a dip in the playoffs, with those two points all he was able to produce over the seven games. That lack of production can partially be attributed to John Tortorella’s game plan and Lundqvist’s play, and were particularly frustrating in light of the Caps’ lack of postseason power-play effectiveness after such a strong regular season; the man advantage team only scored one goal on only nine attempts over the last five games (seriously... nine attempts in five games). How much of that futility rests on Ribeiro’s shoulders is up to an individual’s interpretation.

The Discussion: It was a hot topic in late March, but at this point, do you regret the Caps hanging on to Ribeiro at the trade deadline? Ribeiro has said that he would like to continue (and possibly end) his career in Washington, but he's coming off of a five year, $25-million contract and looking for a "four to five year deal." In a summer of thin UFA talent Ribeiro sits at the top of a short list of proven NHL centers (arguably the only premier one) and teams will come calling for the free agent as soon as they can - but is there a deal that would work for both the Caps and Ribeiro to keep him in D.C.? If he's here, what would it take for him to earn a "10" next year?