Tonight Alex Ovechkin picked up his 400th career goal, another step on the road to all-time greatness.

On October 5, 2005, just over 27 minutes into his NHL career, Alex Ovechkin scored his first goal against the Columbus Blue Jackets - and a new era began in DC:

400 goals. In a career that has already seen its fair share of milestones, of shattered records and tremendous achievements, this isn't just one more on the list - it's among the most impressive, and that's certainly saying something. In just over eight seasons, Ovechkin has established himself as one of today's most lethal goal-scorers, and is on his way to being etched in the history books as one of the game's all-time greats, as well. And while the path hasn't always been smooth, the trajectory not always straight, he's better than ever... a fact made more special, perhaps, because of that not-so-smooth path and not-so-smooth trajectory.

400 goals. It's more than a number of greats who came before him would ever score, many of them attempting to do so in two or three times as many games (and many doing so in an era in which goals were easier to collect). It puts him in an elite fraternity of active players, just six others who have achieved that plateau - all of whom played their first game before the 21st century even began.

400 goals. It moves him into the ranks of the extraordinary, the special, the players whose names became synonymous with a particular team and with hockey itself. Adjust the scope to the rate at which those greats scored, and the extraordinary become even more so, the company even more select. Ahead of Gretzky. Ahead of Brett Hull and Bobby Hull. Ahead of Phil Esposito. Ahead of the great Maurice "the Rocket" Richard. 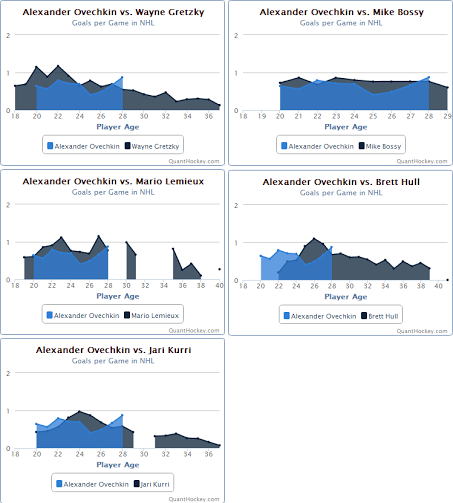 400 goals is a huge number - and each of the 400 has, in its own way, been special to watch. The beautiful and the gritty, the everyday and the ones that lift you out of your seat in pure amazement - and yes, the empty-net goals like the milestone goal itself. We have been completely spoiled by his ability and his presence; the hope and the sense is that this will continue for the foreseeable future.

So congrats, Alex Ovechkin, on your most recent milestone - a truly great one, and likely just one of many that lie ahead.