Ovechkin's Hart Hat Trick: The Writers Got It Right

The Caps' captain won his third career Hart Trophy over the weekend... and here's why

Share All sharing options for: Ovechkin's Hart Hat Trick: The Writers Got It Right

Like most awards in professional sports, the NHL awards are often the subject of debate and, at times, controversy, as fans and media alike weigh in on who should or should not have won each trophy once the ballots have been cast and the hardware handed out. Of all of the awards, however, few seem to draw as much focus and generate as much conversation as the Hart Trophy.

The Hart Trophy is awarded annually to "the player judged to be the most valuable to his team", criteria which may seem fairly straightforward but which can be (and often are) interpreted slightly differently as being the League's best player... of course if that were the case, it would beg the question of why the NHL would hand out two awards that mean the same thing, since the Ted Lindsay Award (nee Lester B. Pearson Award) is given to the League's most outstanding player, but that's a separate issue.

Regardless of how one views the Hart Trophy, 2013 was one of those rare years in which a case could actually be made for each of the three finalists to win (to say nothing of at least one or two others who didn't make the cut) - in large part because of the 48-game sample, which provided less time for the the top guys to separate themselves from the pack. This season it came down to a battle of the top draft picks, pitting Alex Ovechkin against some very tough competition in Sidney Crosby and John Tavares for the trophy. 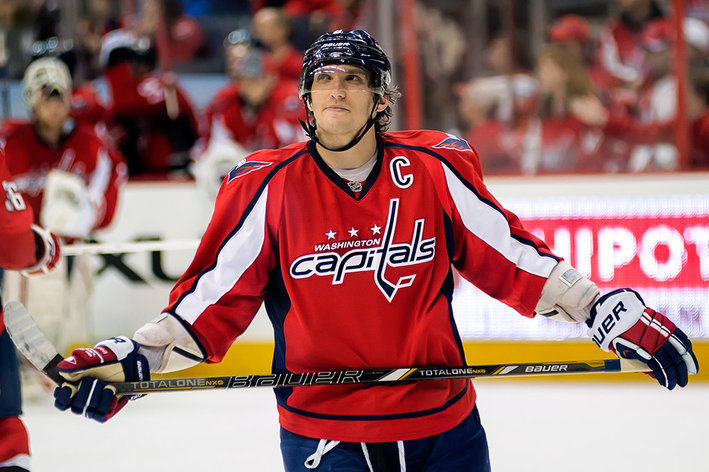 Despite missing the last 12 games of the regular season with a broken jaw, Crosby was without question the best player in the NHL this season (when he played), putting up huge numbers in just 36 games and elevating the respective games of his linemates - neither of whom played at nearly the same level after he got injured. Meanwhile Tavares drove the Islanders' playoff push with a point-per-game pace, including some impressive road numbers en route to one of the League's best records away from home and the first postseason berth for the Islanders in six years.

Which brings us to the third finalist - and eventual winner - Alex Ovechkin.

Ovechkin's 2013 resume is fairly impressive in its own right and more than enough to justify his Hart Trophy win, particularly if one takes the words "most valuable to his team" literally... and yet his win still set off a fair amount of complaining about why he didn't deserve it (or worse, why his win means the Hart Trophy criteria are somehow flawed). So what's the case for Ovechkin's third career Hart Trophy win?

For starters, his offensive numbers were simply phenomenal. In this lockout-shortened season, Ovechkin finished the year with 32 goals in 48 games, equaling his production from the entire 2010-11 season (consisting of 79 games) and falling six goals short of last year's total (which he scored in 78 games). Those 32 goals topped the League, besting reigning Richard Trophy winner and division rival Steven Stamkos by three; half of them came on the power play, also a League-leading total that was six more than anyone else in the NHL this season and the most he's scored since the 2008-09 season. With 24 assists to go along with all of the goals, he finished the year with 56 points, good enough for third-best in the NHL and tying him with fellow Hart finalist Crosby.

For Ovechkin, the midpoint of the season signaled a complete turnaround (at both an individual and team level), as he went on a tear over the second half to help guide the Caps to the playoffs for the sixth straight year. An amazing 23 of his 32 goals and 36 of his 56 points were accumulated in the final 24 games of the season, a torrid (albeit somewhat unsustainable) pace that changed his season - and that of the Caps - from highly disappointing to highly promising.

By the end of the season Ovechkin had scored just over 21% of the team's total goals and either scored or assisted on 37.5% of them

It went well beyond just the sheer volume of offense from #8, as his production was both timely and crucial to the team's success down the stretch. By the end of the season Ovechkin had scored just over 21% of the team's total goals and either scored or assisted on 37.5% of them; for comparison's sake, Crosby produced just 9% of his team's goals and assisted on or scored 35%, while Tavares matched Ovechkin's 21% in goals for the Islanders but also played a role in "just" 35% as well.

But Ovechkin's share of the team's offense rose dramatically when looking at the stretch of games from March 1 to the end of the season. Over the course of those 8 weeks, no one in the NHL put up higher numbers than Ovechkin. His 24 tallies were seven better than the next-highest scorer and accounted for a League-best 25% of the team's total output (97 goals) during that stretch (Rick Nash's 17 goals made up the second-highest percentage, contributing 21% of New York's 82 goals after March 1). With 41 points overall - five more than the next-highest after March 1 - he helped create 42% of the team's production, tied for fourth-highest behind Martin St. Louis, Phil Kessel and Taylor Hall.

And then there was the team's record when Ovechkin provided that offense. It's often said that as Ovechkin goes, so go the Caps, and this season was a perfect example of that as he practically put the team on his back and carried them to another Southeast Division title. 16 times this season Ovechkin was kept completely off the scoresheet; in those 16 games, the Caps were 4-11-1 (2-8-1 in the first half of the season). When he scored at least one goal? 19-4-1. In multi-point games for the captain, the team was 15-1-0; when he scored more than one goal, they were undefeated (6-0).

Despite all of this, of course, there are those who would argue against his "worthiness" as Hart Trophy winner. Some would perhaps point to his slow first half as reason enough to keep him out of the running, and that's fair to a certain extent. The fact is that Ovechkin needed to get red-hot in the second half of the season to keep pace with the top scorers in the League. 23 goals and 36 points in the final 24 games is noteworthy but it also means that he only had 9 goals and 20 points through the first 24 games... which is noteworthy for a completely different reason.

That said, the slow start is somewhat understandable when considering that Ovechkin swallowed his pride and, at the suggestion of his coach, made the switch from the left-wing position he'd played for years to the right side. Not only does that somewhat mitigate the uncharacteristically low numbers he posted early on but it also shows leadership and maturity, a willingness to evolve and make sacrifices for the good of the team.

It's also not unheard of for a second-half resurgence to propel someone to a Hart Trophy win; as Greg Wyshynski pointed out, one need only look back two years to Corey Perry's win to see that this is pretty common. While the games late in the season are worth the same as those early on, they somehow seem to matter a bit more - points become that much harder to come by (both on the ice and in the standings), playoff races that much tighter, the battles that much more intense, voters' memories that much fresher. If the situation had been reversed, if Ovechkin had started the season red-hot and faded when his team needed him late in the year, it's unlikely he would have garnered consideration for the Hart regardless of how shiny the numbers were at the end of the season.

In some ways it's [Ovechkin's] lackluster start that helps further underline how valuable he is to his team's success.

In some ways it's his lackluster start that helps further underline how valuable he is to his team's success. On March 10, Game #24 of the season, the Caps were seven points out of 8th place and nine points back of the division lead, due in some degree to the lack of scoring by their top line and most notably Alex Ovechkin. Less than a month later they had climbed into first place in the Southeast for the first time this season; in the 12 games between March 11 and April 4 Ovechkin put up 11 goals and 17 points. It wasn't the only factor in the team's turnaround (and Adam Oates deserves a ton of credit for both the team's resurgence and that of his captain) but there's no question that it was at least part of the story. Take Ovechkin off of this team for even half of those games down the stretch and it's unlikely that the Caps make the push that they did; if, for example, you took Crosby off of his team, odds are they'd be just fine. In fact we know they were.

For others, the argument centers around everyone's favorite narrative: that Ovechkin's numbers (and his team's second-half resurgence in general) is based almost entirely on competing against so-called "weak" teams. No one would deny that the Southeast Division was less than stellar this season, and it's true that Ovechkin was able to put up some bigger numbers against division rivals and non-playoff teams than he had against "good" teams. But he certainly wasn't doing so early in the season (or the two seasons prior, for that matter). Once he turned things around he was scoring against everyone, playoff team or not - the 13 points (6 goals, 7 assists) he posted in 11 games against playoff teams down the stretch showed that he was more than capable of putting up points regardless of opponent.

He wasn't alone in taking advantage of some of the weaker teams, either; in fact, both Tavares and Crosby had higher points-per-game rates against non-playoff teams than Ovechkin (1.37 points/game), posting 1.75 and 1.5 points-per-game respectively... both of which jump up a bit higher if you include games against the Caps, a non-playoff team for more than half the season.

Regardless of their place in the standings, the fact remains that every opponent Ovechkin faced was still an NHL-caliber team with NHL-caliber players. He still had to face the best defensemen from those teams, to say nothing of their best defensive forwards. And if you consider that his hot streak really began during a particularly road-heavy stretch of the schedule, it meant that not only was he facing the other team's top defensive players each night, the opposing coaches were also able to get that favorable matchup against him almost every shift. - and yet he still managed to score 19 goals away from Verizon Center, more than half of his entire season total (including five goals in six games against playoff teams).

There will always be debate about who is deserving of what award and who was robbed. And the reality is that all three finalists this year could have won, for vastly different reasons, and that alone will (and should) inspire debate. In an 82-game campaign, perhaps things are different; maybe Ovechkin comes back to earth or maybe the final 34 games are more of the same, maybe the Islanders can't sustain their late-season push or maybe Tavares rises to an even higher level. Maybe Crosby returns to health and resumes terrorizing goalies Leaguewide, maybe he doesn't or can't. Give us 82 games to determine who is the most valuable next season and perhaps there are three new faces in the mix.

For this year, though, the trophy belongs to Alex Ovechkin - and deservedly so.