Optimizing the Capitals' Lines and Possession

Share All sharing options for: Optimizing the Capitals' Lines and Possession

[Ed. Note: It's with great pleasure that we welcome the esteemed Muneeb A (formerly red army line, whom you've been reading over at Red Line Station and following @muneebalamcu) to the Japers' Rink masthead, helping us to maximize our own lineup.]

Since taking over behind the bench at the beginning of the lockout-shortened 2013 season, Adam Oates has made a handful (or more) of lineup decisions that have had armchair coaches scratching their heads. Last season he moved a superstar forward from the wing he'd played all his life to the other side (and briefly sent him out alongside grinders Jay Beagle and Joey Crabb). The move paid off. And while that was by far the most noteworthy of these moves, others - including his obsession with handedness as a determining factor in positioning, sitting puck possession superstars Mathieu Perreault and Wojtek Wolski, and pairing John Carlson with John Erskine (which looked to be asking too much from both Erskine, who is not the mobile, puck-moving blueliner Oates' system demands, and Carlson, who was better off paired with any other left-handed blueliner on the squad) - are worth mentioning.

This season, Oates has kept eyebrows raised by severely limiting Martin Erat's minutes earlier in the season, continuing to play Brooks Laich and Troy Brouwer together in significant even-strength minutes despite their rough starts and benching a productive Eric Fehr (whom he'd tried converting to center) for a month and counting.

It's always possible that Oates is sacrificing short-term success to stick to a longer-term plan, whatever that may be, as we saw last season with Alex Ovechkin's move to right wing (and as we're seeing now with Tom Wilson, who has only been given severely limited minutes to this point in his young career). If that's the case, then, at some point, we should expect to see some real payoff as Oates optimizes his line combinations and pairings, and for the team to receive a subsequent boost. And since a strong Corsi percentage (the ratio of all five-on-five shot attempts going in a team's favor) is basically a prerequisite for a deep playoff run, ideally these changes would result in a strong Corsi percentage for the Capitals.

So how would Adam Oates optimize his lines if the highest possible Corsi percentage was his goal?

To estimate the effect of lineup changes to maximize the team's Corsi percentage, I used the method Michael Parkatti used to search for the Edmonton Oilers' optimal lineup. I calculated the Corsi percentage for each pair of forwards and each pair of defensemen (minimum 50 Corsi events together since the start of last season), restricting my search to times when the game was within a goal in the first two periods or tied in the third (i.e. "close"). If Oates has already briefly paired each duo in the optimized lineup, if that duo had some success, we should be able to find it.

I estimated how a forward line might perform in terms of Corsi by taking the average Corsi percentage of the three duos (the left wing with the center, the center with the right wing, and the wings together). I did not attempt an adjustment for quality of competition or for zone starts.

To combine estimated line and pairing Corsi percentages into a number for the entire team, I assigned a weight to each forward line or pairing based on approximate share of five-on-five ice time (see "Notes" below). I also added some additional "common sense" requirements:

Here are the Corsi-optimized results, with the defense up first:

You'll notice right off the bat that on the blue line, it's surprisingly Carlson and Alzner bringing the other two pairs down. The duo, without score restrictions, sits at 50 percent over the past two seasons but for whatever reason have done a worse job with the score close. Even after ignoring a brutal outing against Vancouver in the last week of October, they sit at around 47 percent - passable, but still a step or two behind the other two pairs.

Meanwhile, Green and rookie Nate Schmidt have posted a terrific shot differential to date. It's an interesting dynamic for Green, who has not been paired with a left-handed, mobile, puck-moving blueliner since Tom Poti during part of the 2007-08 season. Maybe Schmidt is finally the player that can protect and bring out the best in Green.

Now to the forwards:

(Volpatti and Fehr together did not meet the Corsi minimum, but there were no alternative pairs on the fourth line that did.)

This group of forwards looks very similar to what the Capitals are icing right now, with Latta and Tom Wilson dropping out of the lineup. (Although Wilson has some of the best possession numbers on the team, limited ice time prevented him from meeting the cutoff with anyone aside from Volpatti and Latta, who did not meet it with each other. I gave more weight to duos who met the 50-event cutoff, and Fehr's excellent Corsi percentage with Beagle was enough to get them both into the lineup.) We could well have seen the same defense corps, too, were it not for Jack Hillen's injury earlier this season. So why hasn't the team even come close to breaking even, as this model expects it to?

There are a few factors at play. For one, the model suggests the Chimera-Ward line should get more ice time than the Laich-Brouwer, when the reverse has been true this season.

Second, the numbers for Laich and Brouwer together - already not pretty, to say the least - are partly boosted by a decent lockout-shortened campaign. Last season, Laich and Brouwer together had a Corsi percentage of 48.1 percent, even though their most frequent center was Mike Ribeiro, who had a tough season Corsi-wise in 2012-13. This season, Laich and Brouwer are down to 44.7 percent, having played with Martin Erat, a rejuvenated Marcus Johansson, and noted "play-driver" Mikhail Grabovski. With the score close, they are even worse, under 43 percent. Getting better play from Laich and Brouwer has to be a priority moving forward (easier said than done, of course) if the two are going to stay on a line together.

Third, it's possible that the model is simply overestimating this lineup. The Capitals currently stand at 47.1 percent score-close Corsi, which is within the error bounds.

Regardless, mere lineup shuffling does not look like it could transform this team into one capable of making a deep playoff run, if we accept strong possession metrics as a prerequisite for it. That being said, there are some reasons for optimism.

For one, if Laich and Brouwer can play themselves out of their slumps, they will substantially boost the Corsi percentage of that "third" line—the weakest of the four, by far. Second, it's hard to imagine Carlson and Alzner maintaining a 44.8 percent score-close Corsi together. They were in the black in 2010-11 and only slightly in the red in 2011-12, and have been playing very well lately. Third, the team has played more games against the tough Western Conference than any other team in the East; playing a few more games against the weaker East should give the team a slight Corsi boost.

We'll keep track of how this lineup may change over the course of the season. At this point, it looks like the combination of lineup decisions, improvement from slumping players with time, and schedule won't turn the Capitals into one of the league's best possession teams by the end of the season, but it could get them to the right side of 50 percent Corsi. Given the strong play of Braden Holtby in net and excellent special teams (so far), that should be enough to get the team into the playoffs, especially in a thus-far mediocre Metropolitan Division.

On the other hand, that sort of profile doesn't leave the team much room for error: If its special teams or goaltending suddenly runs cold, or if it faces a championship-caliber team in the playoffs, it could find the losses beginning to pile up rapidly.

Hopefully Oates and general manager George McPhee have some more tricks up their sleeves. 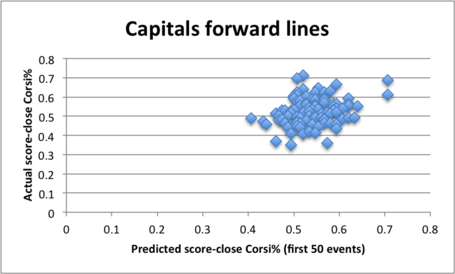 This estimation looks decent. The uncertainty is about 5-6 percent after removing the handful of outliers, which is significant, but small enough to separate "bad" Corsi percentages (which the Capitals have so far) from "above average" (which seemed like a realistic preseason target—think Ottawa or Vancouver).

*Since the Capitals' possession numbers fell drastically under Dale Hunter, the data for 2011-12 trios together would be systematically pushed down in the graph.

To find the ice time shares for each forward line, I substituted a player as a proxy for the line and found his share of ice time using Hockey Analysis. For example, Ovechkin has played 270 minutes at 5v5 so far this season. The Capitals have played the sum of Braden Holtby and Michal Neuvirth's ice times, about 932 minutes, so Ovechkin has played 29% of the Caps' 5v5 ice time.

Since I'm working with total ice times, I had to choose players who have played every game. My first-line proxy ended up being Nicklas Backstrom. The second-line proxy was Brooks Laich, and the third line proxy was Jason Chimera. The fourth line got the remaining share of ice time.

On the blueline, I used Mike Green as the top-pair proxy, John Carlson for the second-pair, and Steve Oleksy for the third pair. But since only John Carlson and Karl Alzner have played in every game, I calculated the ratios of even strength ice time per game between Green and Carlson and Green and Oleksy to find each of the three's ESTOI/gm in multiples of Oleksy's ESTOI/gm. Setting the sum to one, it's easy to solve the equation and see that Oleksy gets about 24% of the ice time, meaning Carlson gets 36% and Green 40%.