From Alzner to Ward, we're taking a look at and grading the 2013 season for every player who laced 'em up for the Caps for a significant number of games during the campaign, with an eye towards 2013-14. Next up, Alex Ovechkin. 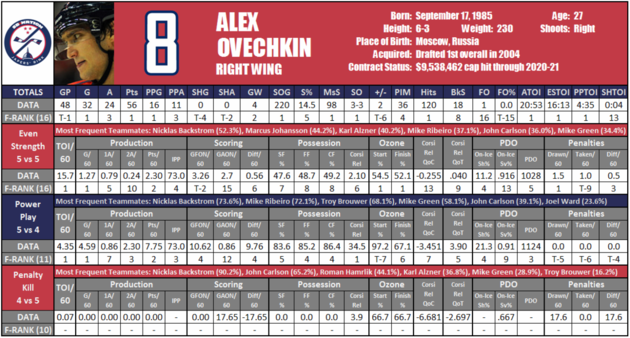 Ovechkin and his most frequent linemates: 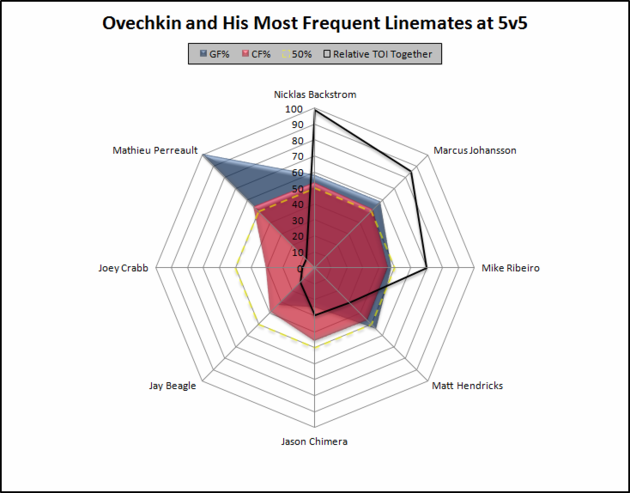 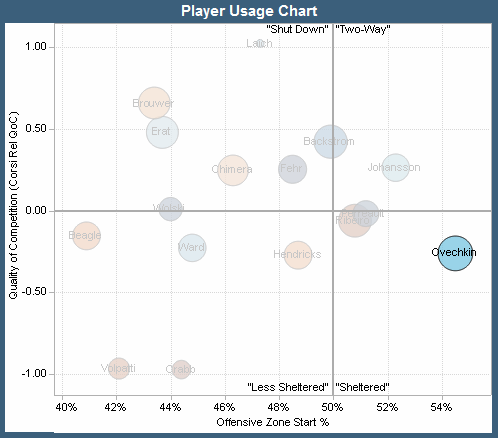 Key Stats: Ovechkin led the Caps in scoring for the eighth straight time in 2013, the only player in the League to finish atop his team's ledger in each year since the 2004-05 lockout. Additionally, the Caps captain, who has never scored fewer than 32 goals in an NHL season, is the only player to have scored as many as 22 goals in each year since that 2004-05 lockout.

Interesting Stat: At 27 years old, Ovechkin became the oldest player to lead the League in goals since a 29-year-old Pavel Bure did it in 2000-01.

The Good: Let's get one thing straight: "Old Ovi" is gone and he ain't coming back, dead and buried, a victim of a changing game and an inability to effectively adapt to it, managerial shifts in philosophy, and Father Time, among other things. One quick look at that last group of charts above tells you all you need to know, even if you don't know your Corsi from your Fenwick. No, Old Ovi (which was really Young Ovi, of course) is a ghost at this point - hope you got your DVDs. 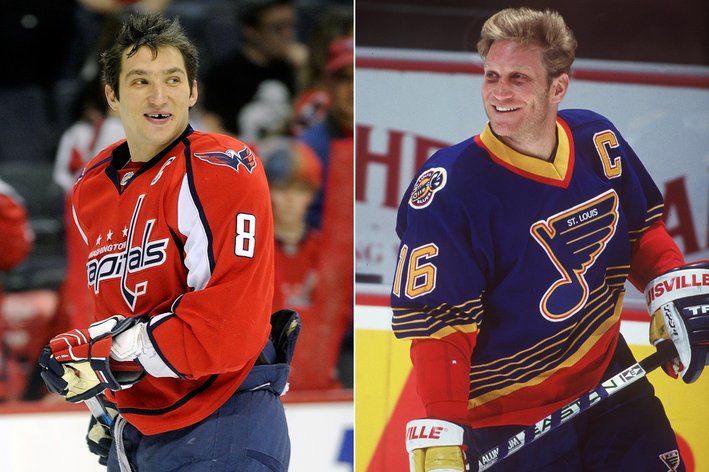 A handful of years into their respective careers, there are a lot of similarities between Alex Ovechkin and Brett Hull. Does that put Ovechkin on Hull's career path? Caps fans should probably hope not.

And yet, 2013 may ultimately best be remembered as the year Alex Ovechkin was reborn. As we wrote when Dale Hunter stepped down from his post as Caps coach over a year ago, "[P]riority number one for the new guy - perhaps even above winning, as crazy as that sounds, is maximizing the team’s return on investment in Alex Ovechkin." Over the course of four months, Adam Oates did precisely that, transforming Ovechkin from (relatively) dormant to dominant, from "washed up" to Hart and Lindsay Trophy finalist and Richard Trophy winner.

But while Oates may have led his horse to water, it was Ovi himself who did the drinking, most notably as a converted right wing at even strength and as a once-again deadly sniper on the team's revamped and incredibly efficient power play. The transition to the starboard side wasn't easy (or particularly smooth), and it wasn't until a quarter of the way through the season that Ovechkin scored his first even-strength goal of the campaign. But 15 more would follow, leaving him three behind the League leaders at season's end. Results on the power play, on the other hand, came much quicker, and Ovechkin matched his 16 even-strength tallies with the same number on the man advantage (and to put 16 power-play goals in perspective, that's 60% more than 2013's second-place finisher, just two fewer than 2011-12's top finisher had over the course of 80 games, and just two fewer than the Boston Bruins had this season). Ovechkin was also three-for-three in shootout attempts, all of which came in Caps wins, and became the franchise's all-time leading playoff goal-scorer with a power-play goal (natch) in Game 1 against the Rangers. Including the post-season, the Caps were 20-3-2 when Ovechkin scored a goal and 10-19-1 when he didn't.

It wasn't just about goals for the League's third-highest scorer, either. (It never is, but the lamp-lighters are what get ink and pixels.) Ovechkin improved his even-strength assist rate, possession metrics, penalties-drawn rate, goals-for and -against rates and defense (gasp!), posted a perfect marriage proposal acceptance rate (we assume), and didn't miss a game all year, despite playing a 31-game "preseason" in Moscow. That whole "Ovi the penalty-killer" thing didn't materialize, but just about everything else Adam Oates had in mind for his captain did. And heck, there's always next year.

The Bad: A few games into the shortened 2013 season, it looked like more of the same for Ovechkin and the Caps, as both were scuffling, spinning their wheels, as it were. Not much was working, least of all the shift from one side of the top line to the other for a guy who had filled the net plenty while playing his natural position. So Ovechkin found himself back in his comfort zone on the left side, skating with Jay Beagle and Joey Crabb for a handful of unproductive games before giving right wing another shot and ultimately making it work.

Ovechkin's possession numbers were nothing special (though much better when he was playing beside Nick Backstrom than Mike Ribeiro), and his per-game shot rate was up 18% over 2011-12, but still the second-lowest of his career (coupled with the second-highest shooting percentage he's ever posted, just a tick below the 14.6% efficiency he delivered in his 65-goal 2007-08 season). Moreover, his detractors, persistent as ever, were quick to point out that there was a curious split between the numbers Ovechkin compiled against teams that met their standards of respectability and those accumulated against the Conference's weaker teams. (They also spewed vitriolic and misogynistic idiocy to anyone who was listening, and then patted themselves on the back for his turnaround, but that's neither here nor there.)

Most importantly (and legitimately), Ovechkin's season once again ended in disappointment (and some physical pain to go along with the emotional dings), as the team he captains was unable to muster a single goal in the two games in which they could have advanced to the second round of the playoffs, and he, individually, didn't score a goal in the seven-game series after that second-period tally in Game 1 (and added just one assist, in Game 2).

An MVP-caliber regular season followed by an early post-season exit... maybe Old Ovi is back after all.

The Discussion:How much did 2013 re-calibrate your expectations for what Alex Ovechkin is capable of? Within Oates's systems, what would you like to see him work on improving? How much sand can Mike Milbury pound? What will it take for Ovechkin to earn a "10" next year?