What Makes a Good Power-Play Look for Alex Ovechkin

Taking a look at what has, and hasn't, worked for Alex Ovechkin in the 1-3-1 power play.

Share All sharing options for: What Makes a Good Power-Play Look for Alex Ovechkin

The Washington Capitals' power play has been a hot topic of conversation since before the season started, when Adam Oates revealed that the Caps would be going with a 1-3-1 set up. Just past the halfway point of the season it appears that it's working as the unit has been near the top of the League, currently converting at a fourth-best 24.2% rate - and Alex Ovechkin has been a big part of that, his eight power play goals putting him into a five-way tie for the League lead.

What makes it all the more impressive is that Ovechkin has scored those eight goals in situations where all of his opponents know that he's the primary option for the Caps.

As Ryan Miller noted after the Capitals' first win of the season, Ovechkin is usually the first look on the power play: "It was tough to give Ovechkin one in the third period there and spot them another goal. I think my read could have been a little bit better. He came from a down low position and their first look is usually Ovechkin. It was a bad read."

Despite Miller's attempts to avoid giving any praise to the Caps' power play, it took some good teamwork to get Ovechkin that shot. We've seen in the past how opponents try to keep Ovechkin as far from the net as possible... so how are the Caps managing to get around that this year?

To find out, let's take a look at a couple of examples, a couple from that first Sabres game the always-chatty Ryan Miller was referencing, and another from last week's win over Carolina. We'll see that in order for Alex Ovechkin to be as his most dangerous, the Caps need another threat to shoot, and the ability to maintain puck control on the far side of the ice from Ovechkin.

First, a look at one of the failed opportunities:

The Caps start by bringing the puck up the right side of the ice, eventually getting it to Nicklas Backstrom below the right wing goal line. 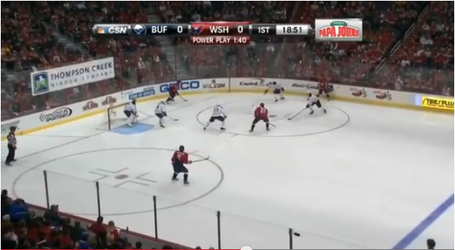 The Caps have gained entry into the Sabres’ zone and established clean possession; Backstrom has the puck below the goal line with Troy Brouwer in the high slot, Mike Ribeiro on the half-wall, and Ovechkin looking for a shot from the Sabres’ right circle. Notably absent from the screen is Mike Green, who is holding the blue line.

Despite decent position by the Sabres’ D, Backstrom is able to get the puck across the ice to Ovechkin for the one-timer. However, if you notice, Miller is already beginning to lean, and is ready to push off of his post, anticipating the play the Caps are about to make. He knows that Ovechkin is the first option, and with Green so far from the net he's off camera and Brouwer occupying the shooting position in the slot, Miller knows the Caps don't have another threat to shoot. 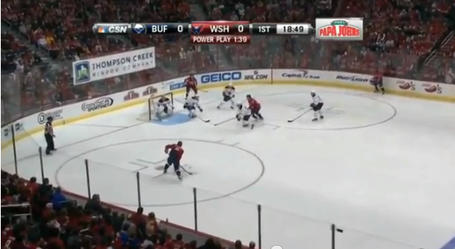 By the time the puck gets to Ovechkin and he’s releasing his shot, Miller has already made it across the crease and is in perfect position, giving Ovechkin no open net to shoot at. In this scenario, Buffalo had every Cap that was in the play covered, except for Ovechkin, leaving them with that one option. In the absence of another shooting threat, Miller and the Sabres know where the puck is going to go, allowing them to cheat towards Ovechkin, and make a relatively easy save (you can see another example of this from the game last night).

Now let’s look at a play from the Buffalo game that was a little more successful for the Caps and Ovechkin...

The Caps enter the zone on the right side of the ice and again establish possession below the right wing goal line. 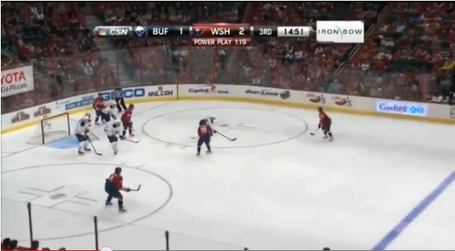 This time Ribeiro has the puck down low behind the goal line, Brouwer is in the crease, Backstrom is in the high slot, and Ovechkin is in his position on the Sabres’ right faceoff dot. The big difference for the Caps on this play is the inclusion of Mike Green in the play, on the point opposite Ovechkin. When Ribeiro passed the puck from behind the goal line to the top of the right circle, Miller had to respect Green's shot. Compared to the previous example, Miller is out on top of the crease challenging and square to Green. This means Ovechkin is wide open, staring at a nearly empty net. 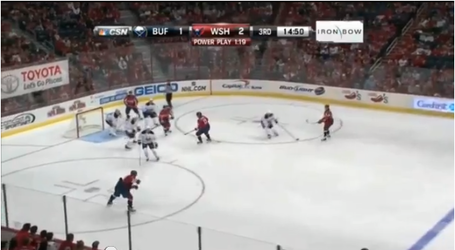 As the puck is getting to Ovechkin, Miller still isn't squared up ready for the shot. Ovechkin one-times the puck and doesn't give Miller a chance, the Captain was on the board for the first time this season, and the Caps had an insurance goal.

Thursday night against the Carolina Hurricanes, Ovechkin added to his power play totals with another goal - and while it probably wasn't exactly how Oates draws it up, they all count the same. This time we can see how the added threat of another shooter in the middle of the ice, and puck control on the right wing, contributed to an open look for Ovechkin. Here's the video:

The Caps begin the rush by letting Backstrom and Ribeiro attack the right side of the ice. The puck ends up on Backstrom's stick down below the right wing goal line once again.

Like the first example, Backstrom tries to go right across the ice to Ovechkin. Dan Ellis is ready for it, and deflects the pass away. Unfortunately for Ellis, the puck caroms right to Brouwer.

Because of the broken play, both Carolina defensemen and Ellis immediately focus their attention on Brouwer. Instead of forcing a shot (wide), Brouwer smoothly slides the puck over to Ovechkin, who has a pretty open look.

Ovechkin doesn't tend to miss the net from there, and he made no mistake burying this opportunity. The Caps tied the game up and were on their way to a comeback victory against their division-leading rivals.

In each of these examples (and the goal last night) the Caps were able to get Ovechkin an open look inside the faceoff circle, something that had become increasingly rare over the last couple of seasons. Backstrom, Ribeiro, and (when healthy) Green have been the keys to maintaining the cross-ice possession, pulling the attention of the defense and goaltender. While Green has been the most dangerous threat to shoot up top, any presence that keeps the goaltender honest can do the job. And, of course, if the Caps could finally get a goal from the D on the PP that would help create a credible shooting threat.

Perversely enough, by keeping the puck away from Ovechkin and setting up other shooters, the Caps have made sure that Ovechkin has gotten some great looks on the power play. If the Caps can continue to get the Captain these looks, the power play should continue to be one of the better units in the league.

(S/T to Steckel Me Elmo for help putting this together)