When Everything Changed... And If It Needed To

Share All sharing options for: When Everything Changed... And If It Needed To

"You've got to be true to yourself. I found that I was getting away from that this year. People were saying, ‘Do this' and ‘Do that.' I wasn't doing what I believed was the right thing. ... A head coach needs to be doing what he believes is right. I don't know why I got away from it, because everything I had done was right - or it worked." - Bruce Boudreau

With the entire hockey world watching as HBO's cameras captured the captain and coaches now famously trying to ignite their team, the Washington Capitals were summarily dismantled by the New York Rangers, dropping a 7-0 decision to their hosts. If Madison Square Garden were a shed, the Blueshirts took the Caps behind it, sending the visitors packing with a sixth-consecutive loss. Two more losses would follow for Washington before Mathieu Perreault helped snap the streak in Ottawa with a pair of goals in a 3-2 victory that was equal parts relief and resuscitation.

But the damage had been done. That eight-game losing streak wasn't simply a bump in the road en route to a second-consecutive Eastern Conference regular season title; it was the beginning of the end - of this chapter, at least - for the Capitals.

Brooks Laich (via Eliotte Friedman) recounts the aftermath of that night in Manhattan:

It was their first meeting after a gruesome 7-0 loss to the Rangers on Dec. 12.

"We had a day off after that game," said Brooks Laich, after the Capitals won the Winter Classic.

"I remember thinking we were going to get a visit from the GM when we got back."
Instead, they got a message from head coach Bruce Boudreau. Something along the lines of: "Guys, we're going to play the trap." It is the first time in his coaching career Boudreau's used it.

There it was. The trap.

It worked, to varying degrees, for Boudreau and later for Dale Hunter. Boudreau's Caps went on a 30-12-8 run and advanced to the second round of the following spring's playoffs, but a cold run after a hot start in the fall of 2011 would be the end of Boudreau (whatever happened to him, anyway?). Hunter's snooze-inducing version of the trap snuck the Caps into the playoffs on the season's last weekend and ended up knocking off the defending champs and pushing the East's top seed to a seventh game in Round Two.

Sometimes the coin-flip comes up heads, sometimes it doesn't.

The fewer the goals that are scored in a game, the more likely it is that chance - a bounce here, a power-play there - will decide the outcome. And that's essentially what the trap is - an attempt to water down and muddy up the track so that the horses can't run... in either direction. As Friedman put it:

The trap is hockey's Kardashian sister: annoying, dull, something you wish would go away quickly. However, it's very difficult to win without using some variation of it in the new speed-kills NHL. You need a perfect roster and, after that New York skunking, good on Boudreau for realizing he didn't have one.

There aren't too many perfect rosters in the salary-capped NHL, and the Caps team that ran away with the League's best record over the previous season certainly had its imperfections. Was this incarnation markedly more flawed? Regardless, the shift to a trapping system was quite a change for the high-flying, high-scoring team that piled up the goals (and, to a lesser extent, goals-against) over the previous few seasons, and it hastened the decline in offensive productivity of skill players like Alex Ovechkin (who had scored 32 even-strength goals in the 82 regular-season games leading up to the change, but has just 40 in the 135 since) and Alexander Semin (whose talent was utterly wasted in Hunter's system).

The question, of course, is why? After being embarrassed as a Presidents' Trophy winner that got kicked out of the big dance in the first round the previous April, there was a notion that Boudreau's run-and-gun system couldn't win in the playoffs; to quote R.J. Umberger, they "play[ed] the wrong way."

But Boudreau stood fast amid the criticism and pushed back at the suggestion that the loss to Montreal confirmed those opinions:

"It doesn't validate anything," Boudreau replied. "I think the way we play is the way we were built, and if we had to make all these guys into checkers and play a trap game, I think it would have been a pretty boring team to watch, and we wouldn't have been anywhere near as successful as we were."

To be sure, changes needed to be made in the wake of that embarrassment. Most notably, the Caps needed to address the persistently gaping hole at second-line center and keep back-filling the roster with players who could play an up-tempo brand of hockey, and they also desperately needed to become more agile in adapting to teams that adapted to them.

But the fact is that the Caps dominated that series (everywhere except where it mattered most, of course), and more or less picked up where they left off at the outset of the 2010-11 season, averaging 3.4 goals per game through 26 games with a largely similar roster - to make all those guys into checkers and play a trap game, it would have been a pretty boring team to watch and wouldn't have been anywhere near as successful as it was.

Then the flood of goals dried up. Over the next half-dozen games, the Caps scored just eight goals (half of which came in one game against Toronto) and were shutout twice. Over that same span, they yielded 22 goals-against, all of which culminated in that 7-0 whitewashing in New York and the subsequent system change.

As absurd as it might sound to change an entire system (that had, by any reasonable definition, been tremendously successful over the previous three years) based on a six-game losing streak, it's all the more absurd considering that even during that rough patch, the underlying numbers were still good - the Caps outshot their opponents 174-123 at even-strength during the first half-dozen games of the losing streak, meaning that the Caps took 58% of the even-strength shots on goal in those games. Results (and score effects - the Caps obviously trailed for quite a bit of the game time during that stretch) notwithstanding, the Caps were generally better than their opponents in those games, they just didn't have anything to show for it... other than equally unsustainable 2.9% shooting and .878 save percentages at evens. 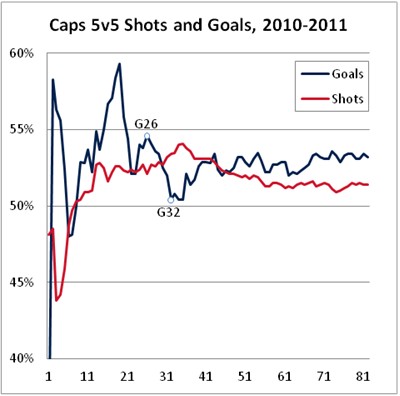 The goals dropped off a cliff at Game 27 (the first game of the losing streak), but the shot domination was actually still improving. The trap was installed after Game 32, and what happened next was predictable: the goal distribution got more favorable (which it would have anyway - the Caps' PDO bottomed-out at 987 following Game 35 and finished the season at 1006), but the shot differential - the discrepancy in possession - went in the opposite direction. The Caps were no longer tilting the ice. The Caps were now playing coin-flip hockey.

Somewhat ironically, it was another stretch of bad luck (and bad goaltending) that ultimately cost Bruce Boudreau his job in November, 2011. Over the eight games leading up to Boudreau's dismissal, the Caps posted a 2-5-1 record and were outscored 33-17, despite outshooting opponents 194-171 at even-strength; they had a decent enough shooting percentage of 7.7%, but a woeful save percentage of just .865. Other factors contributed to the end of Boudreau's run as Caps bench boss (and they shouldn't be minimized), but they mostly stemmed from the team's inability to see November for what it was - a run of crappy play and crappy luck from which the team would eventually emerge, with or without the head coach that was named the best in his field just a few years earlier.

Except this wasn't necessarily the same head coach who had won the Jack Adams trophy in 2008 - this was that man trying to change who he was, trying to get the horses back in the barn both on and off the ice. By late November, 2011, change was inevitable, and Boudreau knew it:

"This group has got to learn how to be mentally strong. ... We’ve reached, for 15 games now, some adversity and some guys are having a tough time with it. ... I’m hoping [the mental fortitude will] come from within because if I’ve got to teach them how to be tough, then I don’t know quite how to do that."

Perhaps a demonstration a year earlier of how slumps happen, streaks end and belief in the system and those charged with executing it would have been that teaching moment. But that ship had sailed long before Thanksgiving, 2011.

George McPhee's record as Capitals GM is characterized by an abundance of patience and caution. He has never been one to make a "panic trade," conservative sometimes to a fault. But he and/or those around him over-corrected twice in response to runs of what may have been little more than bad luck, leaving in the wake a team devoid of an identity and seemingly lacking in vision, with personnel that doesn't appear to be particularly well-matched to the systems that followed and vice versa. Perhaps Adam Oates is a step towards changing all of that, towards putting the organization back on the right track, but it's doubtful that this shortened, post-lockout season will provide any answers on that - for the second time in just over a year, the Caps have a new bench boss coaching (with minimal practice opportunities) someone else's players... square pegs, round holes and all.

As is almost always the case, hackneyed though it may be, a team is never as bad as it looks when it's losing or as good as it looks when it's winning. Boudreau's Caps weren't as bad as they looked during the dry spells that ushered in the trap era in D.C. or cost him his job, and they weren't as good as they looked when they rattled off 14-straight wins in January and February of 2010. (And Oates's Caps aren't as bad as they look right now.) With the Washington Capitals currently sitting at the bottom of the NHL standings, their superstar struggling, their ability to consistently dominate games by owning the puck long since gone, and the coach with among the best regular-season winning percentages in NHL history now doing that winning somewhere else, it's hard not to wonder what might have been if Boudreau hadn't made that initial decision to get more conservative. (And this sort of post-hoc analysis ignores some of the very real external pressures that go into decision-making at these high levels of sport.) But at the very least, these serve as cautionary tales - believe in systems, believe in what works, believe that streaks end... and everything else is just noise.