Adam Oates sliced through the conjoined hip that was Karl Alzner and John Carlson, and he's now getting the results and flexibility he had in mind when he did so.

Share All sharing options for: How the Separation of Alzner and Carlson Strengthened the D Corps

Note: all below data was captured from Hockey Analysis's With You/Without You function on 4/18 (after 43 GP), and then manually calculated and applied.

There's been plenty made about the early season severing of the John Carlson and Karl Alzner union. And rightly so. Carlzner, as the two young defenseman were affectionately known, was the Caps' fanbase's Lancelot and Guinevere, Paris and Helena, Starsky and Hutch...whatever.

From 2010 to 2012, John Carlson spent more than 70% of his even strength TOI flanked by his trusty, red-bearded Canuck sidekick, Karl Alzner. A fact evinced by the comparison of Carlson's top 20 most frequently-faced forwards during this two year stretch to Alzner's top 20. Fourteen of them overlapped.

Hardly the scum of the pond, so to speak. And of this impressive class of twine-ticklers, only Milan Michalek (.875 G/20 not against Alzner, .915 G/20 against him) produced better against Alzner than they did against the rest of the league. If you need an elucidation of a shut down defenseman, look no further.

In the 30% of ice time that John Carlson did not share with Alzner, only two of these fourteen skaters- Blake Wheeler and Thomas Vanek- were able to improve upon their production as compared to the rest of the league's blueliners, and even then the improvement was miniscule.

A fearsome tandem indeed. Take a look below at what they did in 1966:12 worth of shared ice time over the years.

But after something of a more sporadic start to the season, Adam Oates decided to split the two up after 74:21 of ice time together that yielded the below numbers.

A bold move from the bench boss, but not an unwarranted one, given the falloff. From 2010-2012 Carlzner was a +0.101 GF/20. In their disastrous start to the season? An ugly -0.272 GA/20. Granted, the .850% on ice save percentage behind John Carlson did him no favors, and his Fenwick numbers through those first four games hint that he was playing better than the volume of goals indicated.

Let's take a look at how it's paid off for Oates.

Now that they've been separated, the overlap in common opposing forwards has predictably dwindled, from the 16 of 20 in years past, to 7 of 20 this year. Here's a quick breakdown of each d-man's most common assignments, ordered by TOI against:

As one might have surmised, it's a mishmash of first and second liners, division heavy due to the compressed conference-only schedule. The division of Carlzner has given the benchboss a bit of flex in how he chooses to deploy his defensive troops, as we explored a few weeks back. We noted then that many teams have scoring lines 1A and 1B, as opposed to the single top scoring line we see utilized here in DC. Ideally, with Carlson and Alzner on separated, the Caps would have D-pairings 1A and 1B to counter.

As evidenced by the Player Usage Chart and Table below (both from Hockey Abstract), the Caps have gotten exactly what they wanted from The Divorce in terms of usage, with both players, now separated, each performing well in "shut down" minutes. Alzner's bubble is the one on the left. 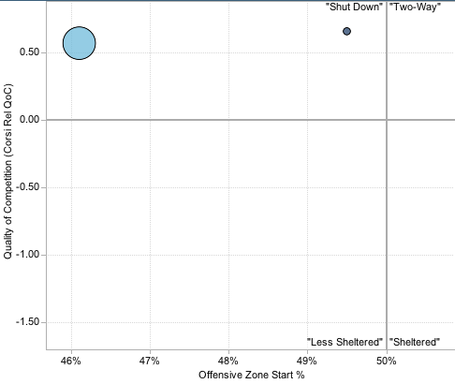 Against Alzner, only five of the above twenty skaters have produced at a better click than when they don't face him: Jokinen, Tlusty, Staal, Semin, and Kopecky. Alzner decreases the G/20 of his opponents by an average of 0.286 when he sees them. It's a drop off from the average -0.361 G/20 effect he had from 2010-2012. Anything in the negatives is still an indicator of effectiveness, however, and the increase of goals against numbers can probably be attributed to the fact that he's not receiving the same goaltending behind him as most of his other blueline brethren.

John Carlson, conversely, has seen his goals against numbers improve since the divorce. Of his twenty most common foes, six of them are upping their game- Stamkos, St. Louis, Ott, Ennis, Stafford, and Mueller. Collectively, however, Carlson is shutting down his opposition with nearly the same efficiency as Alzner has for the past couple of years, decreasing opponent production by an average of 0.356 G/20.

Carlson and Alzner are both driving play, as shown by their positive relative Corsi numbers, and by the blue bubbles in the chart above, though in this instance I believe their goals against numbers are more illuminating due to the function of the so-called shut down defender. Both men are tasked with taking on the point producing specialists of the conference. They've both considerably lessened the collective effectiveness of these opponents as measured by goals against, which when you boil it down, is how games are decided.

By separating Alzner and Carlson, Adam Oates and Calle Johansson have fortified their defenses on a thin blueline, each young defenseman now anchoring a pairing that's up to the task of shutting down the oppositions most high-octane players, or at the very least minimizing their production.