Which Washington Capitals team was the best the organization has ever put on the ice? It all comes down to this in our tournament to answer that very question.

Share All sharing options for: The All-Time Capitals Team Tournament: The Finals

And then there were two. We've presented and you've voted on 14 different match-ups (including a couple of toughies in the Final Four), and what's left is the tourney's top two teams. So here we go, for all the fake marbles...

As we set 'em up at the outset of the tournament, the top seed is the 1985-86 team that won fifty games (the only squad in club history to do so without the benefit of the shootout) on the strength of great defense and solid goaltending, evidenced by the League's second-fewest goals-allowed. Lead by future Hall-of-Fame blueliners Rod Langway, Scott Stevens and Larry Murphy on the back-end and 30-goal scorers Dave Christian (41), Mike Gartner (35), Alan Haworth (34) and Craig Laughlin (30) as well as Bengt Gustafsson, Bobby Carpenter, Bobby Gould, Gaetan Duchesne and others up front, the team racked up a then-franchise best 107 points but finished second in the Patrick Division to the Flyers. 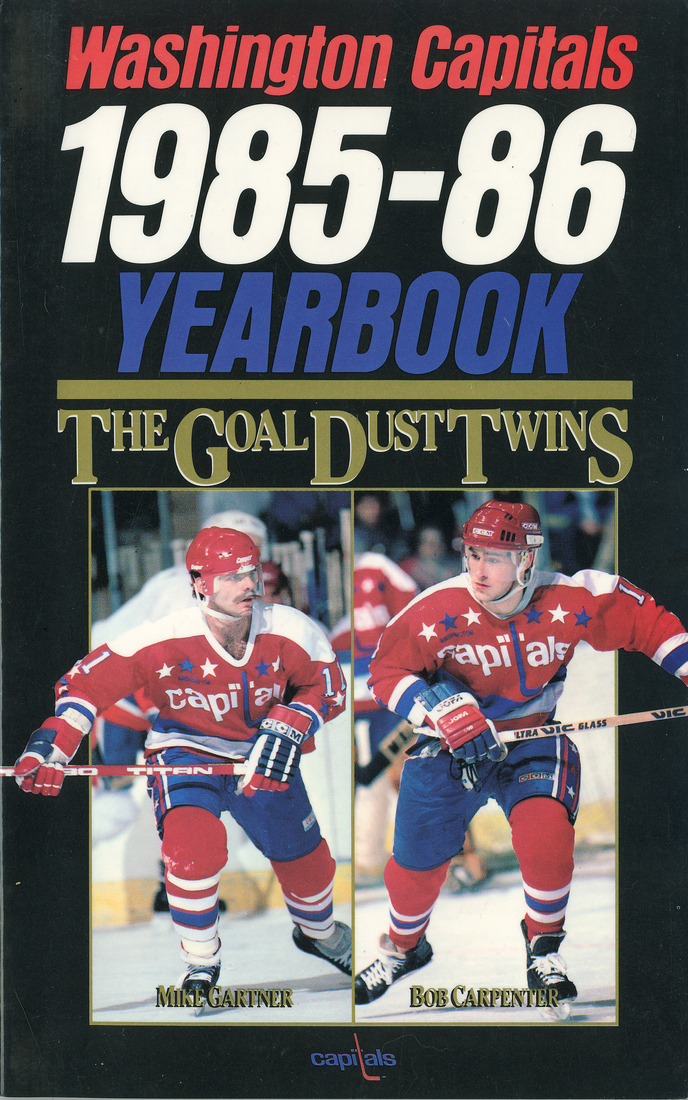 Well, this section is depressing. For the 1985-86 team, fortune broke their way as the Patrick Division regular season champion Flyers were upset by the Rangers in the first round, setting the Caps up for a second-round date with the Blueshirts after they'd swept the Isles. In fact, the Caps entered Round 2 with 20-plus regular season points on every team remaining in the Wales Conference, and 29 on the Blueshirts. Washington would drop Game 1 in overtime, then rebound with convincing 8-1 and 6-3 wins... before dropping three straight and hitting the links, which was particularly unfortunate given that the Caps had at least 18 regular season points on each team that ended up in the Campbell Conference Finals as well. The 1985-86 team was not only among the Caps' best, but that spring also likely represented the franchise's clearest path to a championship. Alas...

For the Presidents' Trophy team of 2009-10, a first-round match-up against the Canadiens awaited. After dropping a stunner in overtime in Game 1, a Backstrom hat trick in Game 2 (completed in OT) leveled the series heading back to Montreal, where the Caps took both games with relative ease and set themselves up to close things out at home in Game 5... before dropping three straight and hitting the links. There was plenty of blame to go around - from Jaroslav Halak to Bruce Boudreau's coaching to a lack of secondary scoring to a woeful power-play to fog - but ultimately all that mattered was that it was another Caps team that fell far short of expectations.

This is a pretty classic offense vs. defense battle. Yes, the 1985-86 team had a balanced attack and some impressive looking offensive numbers of their own, but consider the era in which they played and the very clear edge in offense belongs to the 2009-10 team. To wit, the latter only scored three more goals in two more games over the course of their season, but that was far and away tops in the NHL in 2009-10, whereas the 1985-86 team was in the middle of the pack. And here's one for you - when you adjust for era (using the methodology at Hockey Reference), the 1985-86 team's top-two scorers, Christian and Gartner, combined for 59 goals and 64 assists; using the same methodology, Ovechkin winds up with 55 goals and 62 assists on his own.

On the blueline, the edge goes to 1985-86, what with those three Hall of Famers all in their twenties, Kevin Hatcher in his first full season in the League and Darren Veitch rounding out an impressive top-five... and a comically better group than Green, Tom Poti, Schultz, Joe Corvo (!), rookie John Carlson and Shaone Morrisonn.

In net, the 1985-86 team traded for Pete Peeters in November of that season and he finished the year ranked 18th in save percentage out of 38 goalies in the League with at least 25 appearances (tied, incidentally, with rookie Patrick Roy, who would win the Conn Smythe that year). The 2009-10 team went with Theodore and Varlamov, who finished 23rd and 27th out of 47 in the same metric. Come playoff time, Peeters stepped up; Theo and Varly... not so much.

Finally, it's worth noting that each team was coached by a guy who had won the Jack Adams Trophy as coach of the year two seasons earlier (Bryan Murray and Boudreau).

Ultimately, each team disappointed. Underachieved. Choked. You pick whatever verb you want - it likely fits. But in our little grudge match, someone has to win, so who would it be? Which team would win a best-of-seven, 1985-86 or 2009-10? 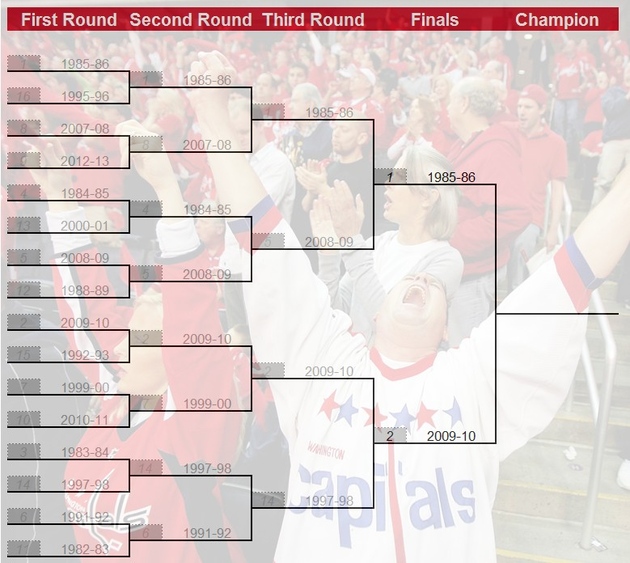