Which Washington Capitals team was the best the organization has ever put on the ice? We're into the Final Four of our tournament to answer that very question.

We started with 16 teams and are down to four, two of which will be eliminated in this round (and you can check out last round here and here). So let's dive into the Final Four, shall we?

The tourney's top seed continues to roll through its opposition, taking 82% of the vote (or, in "best-of-seven" terms, winning the series in five games) from the 2007-08 team. Led by a trio of future Hall-of-Fame defensemen in Rod Langway, Scott Stevens and Larry Murphy and four 30-goal scorers in Dave Christian (41), Mike Gartner (35), Alan Haworth (34) and Craig Laughlin (30) up front (as well as Bengt Gustafsson, Bobby Gould, Gaetan Duchesne, among others).

By now you know their story, but here it is again - 50 wins (back when shootouts referred to high-scoring games, not a way to break ties), still only good enough to finish second in the Metropolitan Patrick Division to the Flyers:

Fortune broke their way, however, as the Flyers were upset by the Rangers in the first round, setting the Caps up for a second-round date with the Blueshirts after they'd swept the Isles. In fact, the Caps entered Round 2 with 20-plus regular season points on every team remaining in the Wales Conference, and 29 on the Blueshirts. Washington would drop Game 1 in overtime, then rebound with convincing 8-1 and 6-3 wins... before dropping three straight and hitting the links, which was particularly unfortunate given that the Caps had at least 18 regular season points on each team that ended up in the Campbell Conference Finals as well. The 1985-86 team was not only among the Caps' best, but that spring also likely represented the franchise's clearest path to a championship. Alas...

The team they'll face is the 2008-09 squad (which upset the 1984-85 team in the voting equivalent of six games). This was Bruce Boudreau's follow-up to his unlikely Adams Trophy-worthy run to the playoffs as a rookie coach, and his chance to prove that that was no fluke. As we noted back in Round 1:

When the playoffs rolled around, the Caps drew a 95-point Ranger team and proceeded to lose Game 1 on home ice with Jose Theodore stopping just 17 of the 21 shots he faced. Boudreau gave the Game 2 start to Semyon Varlamov, who posted a 1.17 and four wins (two by shutout) over the series’ final six games (which was as many NHL appearances as he’d made prior to the series), despite losing a 1-0 decision in that Game 2. Sergei Fedorov’s goal with five minutes left in Game 7 sent the Caps on to the second round, and Varly would stay hot for the first three games against Pittsburgh (where a Kris Letang tally in Game 3 prevented the Caps from taking a commanding 3-0 series lead) before showing signs of fatigue... and a subpar defense. The Caps would yield 42 shots-against in three of the series’ final five games, and they managed to win one of those to force a Game 7 (thanks, David Steckel), but an early Marc-Andre Fleury stop on an Alex Ovechkin breakaway seemingly turned the tide dramatically in Pittsburgh’s favor and they routed the Caps on Verizon Center ice.

Those Caps gave the League everything it could have wanted – an exciting team with a marquee player at his peak squaring off in an epic series against its rival and their superstar(s). And it gave Caps fans a glimpse of what was to come for a young team on an upward trajectory.

So which team would win a best-of-seven, 1985-86 or 2008-09? Could Langway and Stevens shut down Ovechkin? Could Gartner and company outscore the Young Guns in their primes?

Following on the heels of their first-round "sweep," the 2009-10 team garnered an even larger percentage of the vote in Round 2 (95% at last check).

And now the team that was shockingly upset when it counted will face the team that no one expected to do more than any other in franchise history, the 1997-98 team that went to the Finals (and has engineered a couple of upsets already in this tourney).

As we detailed last round:

[W]hat that team did (that so many of its Caps brethren hadn't and haven't done) was peak at the right time, especially defensively, as [Olie] Kolzig posted a .941 playoff save percentage and a 1.95 goals against average with four shutouts in 21 games (one wonders if he got any consideration for the Conn Smythe that Steve Yzerman won with six goals and 24 points in 22 games). [Adam] Oates and [Joe] Juneau each had 17 playoff points, and the Caps had a half-dozen players that scored six or seven goals. Those Caps were certainly a tough out, and lost each of the first three games in the Finals by a single goal to that Detroit juggernaut.

So which team would win a best-of-seven, 2009-10 or 1997-98? Could Kolzig have Halak'd the underdogs to victory, or will Boudreau's boys continue their romp through this Tourney?

And one vote to go (below) and we've got our Final Four. Here's how the bracket's looking... 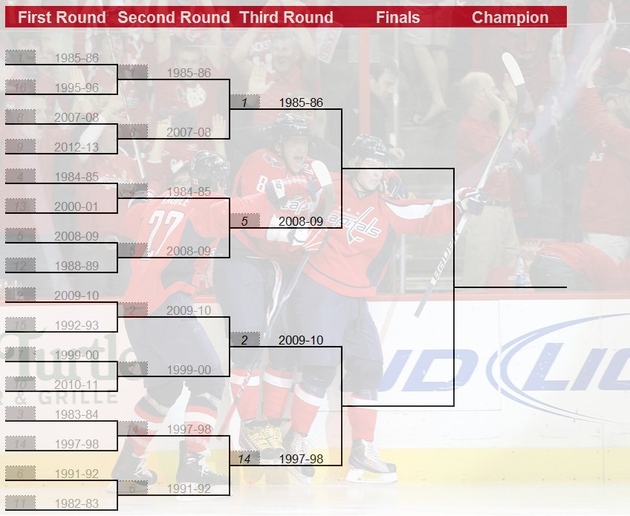