Which Washington Capitals team was the best the organization has ever put on the ice? We wrap up Round 2 of our tournament to answer that very question.

We're halfway through Round 2 (you can check out the first half and vote here), so let's wrap up the Elite Eight, shall we?

No team in this tournament won their first-round "series" as convincingly as the 2009-10, which took 91% of the vote - a four-game sweep (something the real Caps, by the way, have never achieved). Perhaps it's how fresh that team's regular-season dominance is in everyone's mind, or a subconscious longing to rewrite a tiny bit of history for that team (and ignore its shortcomings)... or maybe it's just that that squad was really, really good. As we noted:

We know what happened to that team in the first round that mattered (i.e. reality), but they had no trouble advancing past the 1992-93 team here. And that's the great thing about this tournament - every let down has a counterbalance. Even when a Caps team inevitably chokes, a different Caps team still wins. Alas, fantasy is only so satisfying. Anyway, the 2009-10 team will face the Caps' first Southeast Division (pour a little out) Champ, the 1999-00 team, and its Vezina-winning goalie, Olie Kolzig (41-20-11/2.24/.917). Luckily for them, they didn't have to face the Pittsburgh Penguins in Round 1 of our bracket, but the 2010-11 team gave them all they could handle, with the 1999-00 team advancing by a single vote. Let's call it a Game 7 overtime goal for Peter Bondra, from Adam Oates and Sergei Gonchar. It could happen... it just didn't.

So which team would win a best-of-seven, 2009-10 or 1999-00? Could Kolzig have Halak'd the underdogs to victory, or will Boudreau's boys continue their romp through this Tourney?

There was only one upset among our eight first-round match-ups, and that was, perhaps unsurprisingly, the 1997-98 team won the only Prince of Wales trophy in franchise history. (They took their first round series here in six games.) As we detailed last round:

The season itself was largely unremarkable with three notable exceptions: Peter Bondra leading the League in goals (tied at 52 with Teemu Selanne), Olie Kolzig firmly establishing himself as the number one goaltender (33-18-10/2.20/.920) after Bill Ranford went down with an injury early on and the trio of Adam Oates, Dale Hunter and Phil Housley all reaching the 1,000-point plateau, the only time in League history as many teammates hit have that milestone in the same season. Other than that, it was typical Caps - hard-working, solid defense (including a #1-ranked, 89.2% effective penalty kill) and never enough offense (other than Bondra, the team had two forwards in the teens in goals scored and no one else up front with as many as a dozen). In fact, the team's +0.2 per-game goal differential was the worst of any team in our little tournament.

More importantly, what that team did (that so many of its Caps brethren hadn't and haven't done) was peak at the right time, especially defensively, as Kolzig posted a .941 playoff save percentage and a 1.95 goals against average with four shutouts in 21 games (one wonders if he got any consideration for the Conn Smythe that Steve Yzerman won with six goals and 24 points in 22 games). Oates and Juneau each had 17 playoff points, and the Caps had a half-dozen players that scored six or seven goals. Those Caps were certainly a tough out, and lost each of the first three games in the Finals by a single goal to that Detroit juggernaut.

That 1997-98 squad draws the 1991-92 team in Round 2 (after they coasted in five games in Round 1), a group we labeled as a tourney dark horse (recall that our pal Ed Frankovic had these guys as the best in franchise history a few years back). As we noted then:

Fourteen Caps (including four defensemen) had double-digit goals, with seven topping 20 and a pair – Dino Ciccarelli and Dmitri Khristich – besting 35. Eleven skaters also had 50 or more points, with Michal Pivonka leading the way with 80 and Dale Hunter close behind with 78. The Caps were good and deep.

And then, well, the Penguins happened.

So which team would win a best-of-seven, 1991-92 or 1997-98? Could Kolzig et. al. pull off another upset win for Ron Wilson, or would Terry Murray’s deep offensive-minded squad prevail?

And one vote to go (below) and we've got our Final Four. Here's how the bracket's looking... 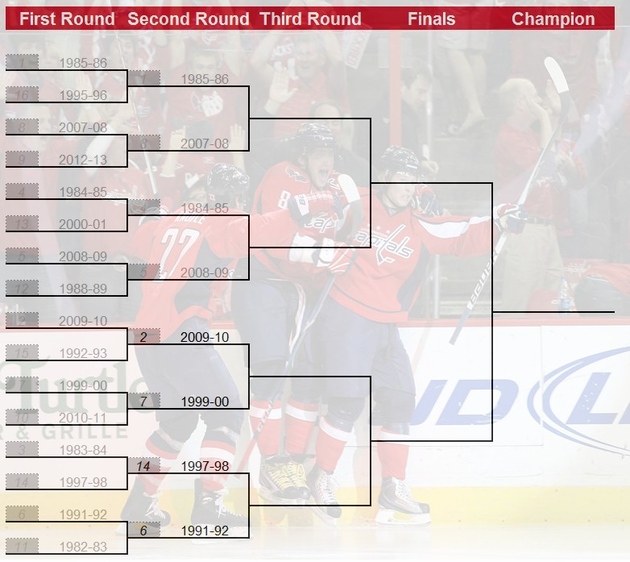