Re-signing Grabovski, Erat on the fourth line and why this year will be different in our latest installment of "you ask, we answer"

Our first question this week centers on... centers. Take it away, Rob...

It's impossible for us to know what is going to happen with Mikhail Grabovski, but there are a couple of factors that make it more likely that he'll stay with the Caps than Mike Ribeiro. For starters, the Caps don't appear to have treated Ribeiro like a rental; they made offers to try to keep him and were in discussions all year with him for a new contract, right up until he signed with the Phoenix Coyotes. That (and the fact that they were in on Vinny Lecavalier) at least indicates that the Caps are willing to pursue a long-term solution at the second-line center slot from outside the organization, rather than a series of stopgaps until a homegrown solution can be developed.

One of the main reasons Ribeiro was priced out of D.C. (along with a cushy spot on a power play with Alex Ovechkin, Mike Green and Nicklas Backstrom) was that the salary cap decreased this year for the first time in the salary cap era (and substantially so). That made it more difficult for the Caps, and many other teams, to keep the players they had to re-sign.

By all indications, the salary cap is going to increase next season, though the magnitude is unclear. While Grabovski may enjoy some of the power-play production bump that saw Ribeiro win a big payday (and if Tuesday night's game was any indication, he certainly will), the Caps will have a rising - rather than falling - cap to work with. However, the Caps don't have a lot of money that will be freed up in expiring contracts, and Grabovski undoubtedly believes he gave the Caps a significant discount this year, so the Caps may need to hope for a larger rather than smaller cap increase if they want to keep Grabovski without having to make major moves to do so (and, before you ask, I don't think the money he's getting from Toronto on the compliance buyout is going to make him any more amenable to giving the Caps another discount, and why should it?). 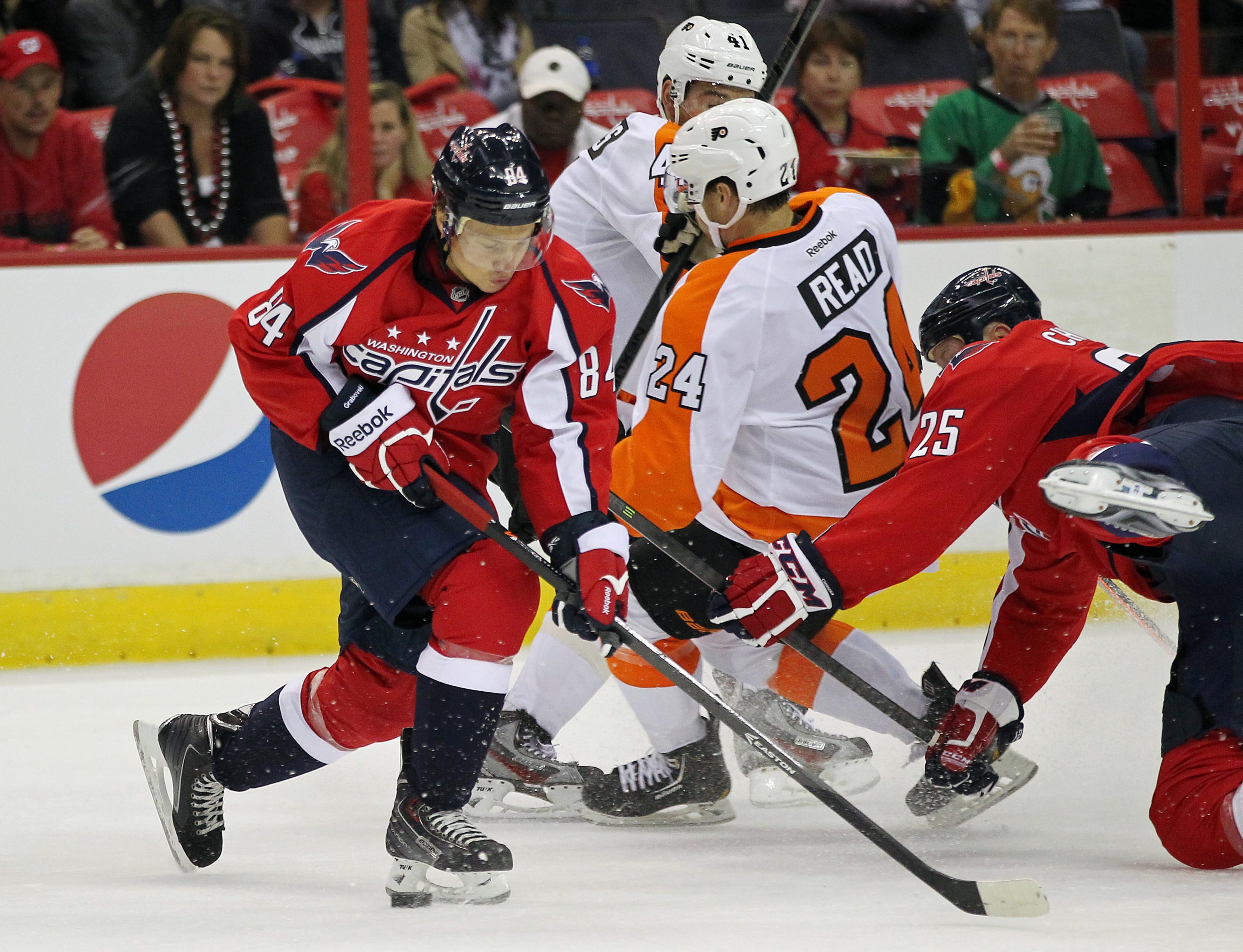 Another reason the Caps may be more willing to commit to Grabovski than Ribeiro is that he has a better all-around game, and is much better at even strength. Given that the team already has the ability to ice a deadly power play unit with or without Ribeiro or Grabovski, and that even-strength has been a problem for them in recent years, you'd think that the front office would be more willing to shell out for a player that addresses the even strength concerns. And if Grabovski keeps producing on the power play (despite Troy Brouwer's complaints about his positioning) then the expected power play downgrade from Ribeiro may not be what many of us feared after all.

Finally, unlike Ribeiro, Grabovski is still in his twenties. He'll turn 30 this season, but he's a bit of a late bloomer and has more productive years ahead of him than Ribeiro does. That difference will be important when you look at the latter years of a long-term (four- or five-year) contract. The Caps haven't had a legitimate second-line center that was remotely close to his prime during Ovechkin's entire career - Grabovski is the first, and the Caps may want to make a commitment to keep him here rather than trying to figure out if another stopgap could work out or wait for a prospect to grow into the position.

At the end of the day there are a lot of factors that need to be sorted out before we can really figure out whether or not the two parties will want to extend the relationship. How will Grabovski work out in Adam Oates's system? How much will the salary cap rise? What kind of money is Grabovski going to ask for? The fit so far seems nice, but it's still in the honeymoon phase. I expect the two sides to start talking extension in January (the Caps couldn't extend him before January 1 even if they wanted to), and sometime in the spring we should have a better idea of Caps fans can realistically start expecting to see number 84 in the years to come. Until then, enjoy the ride and hope for the best.

Our second question (another one for Rob) is about the team's most surprising opening night fourth-liner... and it wasn't Tom Wilson or Michael Latta:

@JapersRink can u explain why GMGM gave up a top prospect for a dude playing 4th line minutes & eating up 4.5 mil in salary? #japersmailbag

There are a couple of ways to go about this. The first, and I still believe the most likely, is that Martin Erat is not destined to be a fourth-line player for the entire season. Last season we saw the likes of Aaron Volpatti, Jay Beagle, and Joey Crabb playing with Alex Ovechkin early in the season. They obviously weren't first-line players, and didn't stay there for long. Our speculation has been that Adam Oates was putting them on Ovechkin's line to try to get a point across. It could very well be that Oates is doing something similar with Erat, but we don't have any insight into that (What point? To whom?). Alternatively, perhaps Oates was looking for a calming veteran presence to skate alongside a couple of kids making their NHL debuts. Lines are still shaking out, so it's rash to read too much into Erat's deployment on Tuesday night... but it's hard not to be troubled, especially with Erat apparently in the dark. 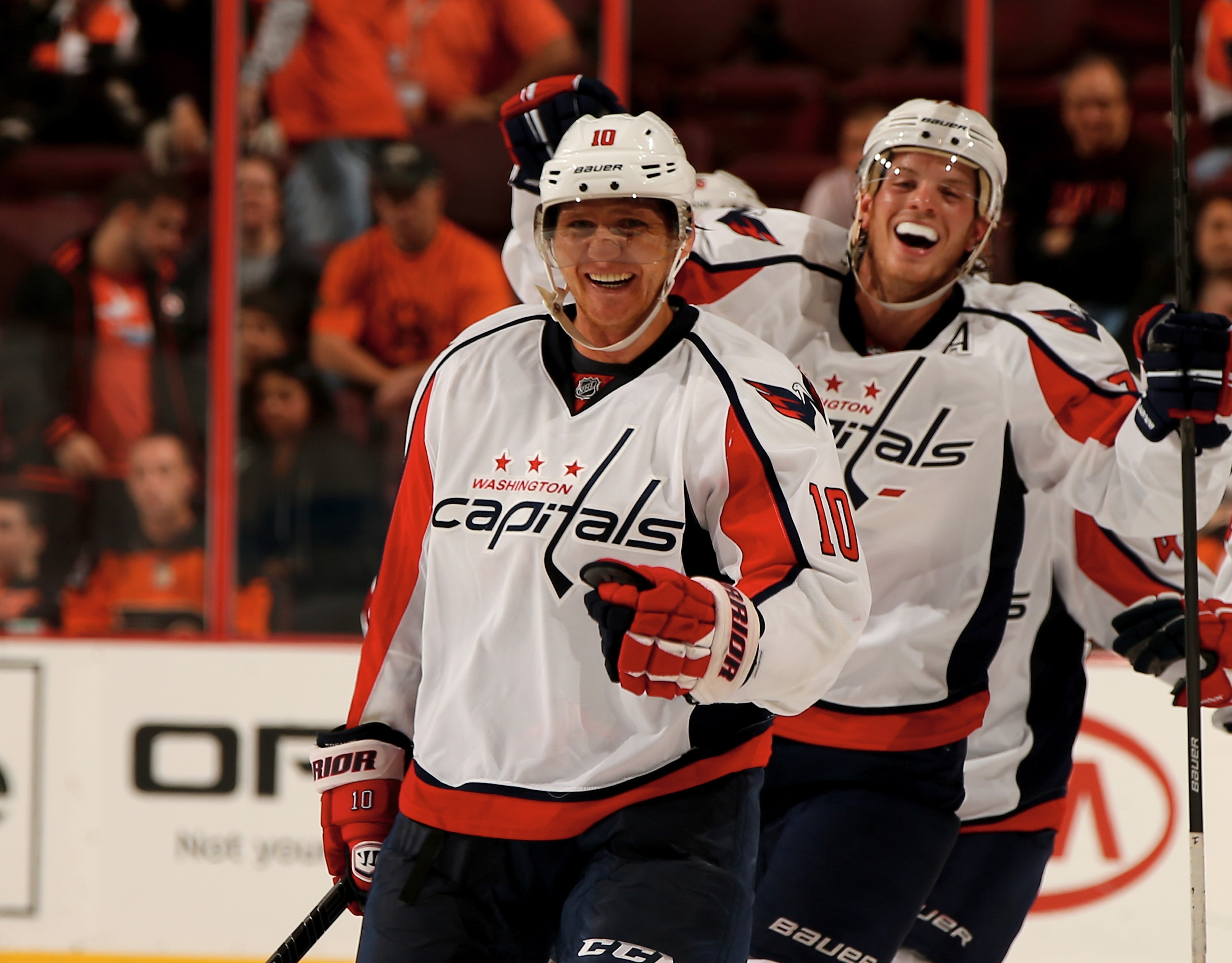 The more concerning way to look at this is that perhaps Oates isn't a big fan of Erat's game, in which case we have to ask why the team traded to pick up a veteran with two more years at $4.5M during last season when it wasn't even clear that the Caps would make the playoffs. At the time, it looked like the Caps were building depth on the wing, something they sorely needed, and making themselves better for a couple years out by locking up a solid, two-way player with cost certainty. Losing a top prospect was a tough pill to swallow, but for a team that needed to get aggressive to get over the hump, it was understandable. Now we see Erat on the fourth line, not exactly a ringing endorsement (and not a lot of "experimentation" with him playing with other top-six players in the pre-season, either). Add on top of this quote from Oates and it looks all the more likely that the impetus behind the trade was 2013 and not 2014 and beyond:

"Last year when we made the trade Brooksie was hurt and Brooksie’s healthy right now," Oates said. "I hope Brooksie plays another 300 in a row but there’s still a feeling of, 'I hope he’s good.' So we’re still trying to figure out chemistry based on [Laich’s health] and that affects decisions."

Talking about the trade in the context of Laich's injury sure makes it sound like the move was made to help the Caps last year without much concern for the future years. That's upsetting from a fan's perspective. Erat makes too much money, and has too much talent, to simply be seen as an insurance policy for Brooks Laich. Further, the Caps didn't look like a team that was going to contend for the Cup at the time of the trade (and they didn't end up being serious contenders), so giving up a potentially important future piece while taking on significant salary looks like a desperation move just to make the playoffs. That would be cause for concern, but it's also pretty far removed from the current regime's standard operating procedure so we aren't ready to put that stamp on the trade after only a small handful of games. If Erat is still playing fourth-line minutes come Thanksgiving, though...

Finally, a familiar sentiment that gets at the very core of sports fandom and deserves a deep, insightful response:

@JapersRink Last night's play looked like last years: lethal PP and 1 ES goal for. Why is this team supposed to be any better?#JapersMailbag

Why should you believe that this year will be any different than the ones that preceded it? You shouldn't. But at least part of you does. And that's why you're gonna watch.