Potential unanticipated roster moves and a couple of wings giving it a go in the middle in our latest installment of "you ask, we answer"

Our first question this week asks us to predict the unpredictable:

#JapersMailbag any dark horses for the roster this year?

With the Caps' salary cap commitments and the respective waiver statuses of their key players, there doesn't appear to be a ton of flexibility among the group that can reasonably be expected to break camp with the team (barring a trade or exposing a player to waivers, of course). There's a good chance that the opening night roster looks something like this (via CapGeek): 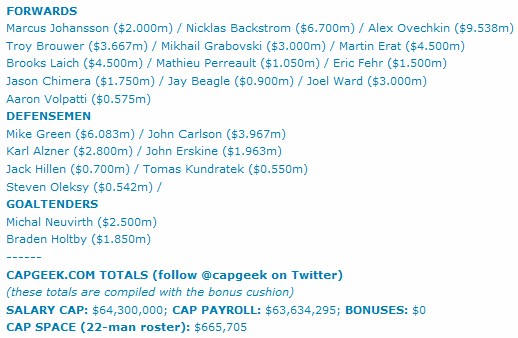 Of note, that's a 22-man roster (the League allows for 23, within the limits of the salary cap, of course).

One name that you might have expected to see here but don't is Dmitry Orlov, and the reasons for that are three-fold. First, Orlov carries with him a $900,000 cap hit (though $160k of that could be essentially deferred via the performance bonus cushion), and the Caps only have $665,705 in cap space, so if he were to be added to the group above, someone else would have to either be traded or placed on waivers (since no one on the roster above is waiver-exempt). We've talked about potential trade candidates before, and certainly it's not inconceivable that the team might place, say, Aaron Volpatti or Tomas Kundratek on waivers, but for now we're going to assume that the organization isn't going down either road. Second, Orlov is waiver-exempt (for now and most of the upcoming season), meaning that he can be sent down without risk of losing him to another team. Finally, his play hasn't yet made what would be an easy decision from a transactional standpoint all that difficult overall.

Contrary to Orlov's predicament, Tom Wilson is making the decision to cut him from the big club a tough one for the suits. In fact, after Tuesday night's game, Adam Oates said of Wilson, "I would like to keep him around us, but obviously that’s going to be George [McPhee]’s call." Perhaps Oates is playing "good cop" and letting McPhee be the "bad cop" who sends Wilson back to Plymouth (where we figured he'd end up all along), but the sentiment seems genuine enough, and Wilson hasn't looked out of place and brings an element of toughness to the team that they could certainly use. The problem is that he has a cap hit of just under $1.3 million (but just $925k with the bonus cushion), so fitting him in (even if it's just for a brief stint) means shipping someone out. Possible, sure, and perhaps GMGM is exploring ways to make it happen. But the easy move would be returning Wilson to his junior team for a season of development in a developmental league. 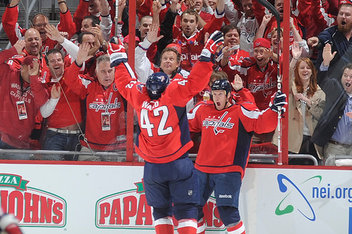 Returning to the question, how about defenseman Tyson Strachan as a dark horse? Working in his favor is his cap hit (of just $550,000), and the fact that he "brings a little bit of that edge on the back end." Working against him is the fact that John Erskine and Steve Oleksy are also physical rearguards, and Oleksy and likely Kundratek are ahead of Strachan on the depth chart for right-handed defensemen at present. (Also, Strachan will turn 29 next month and has yet to play 40 games in an NHL season... there's a reason for that, though it's worth noting that he spent all of the lockout-shortened 2013 season on Florida's NHL roster.)

Up front, there are a few names that come to mind, and two of them - Garrett Mitchell and Casey Wellman - could be added to that 22-man group above and fit under the salary cap; the third, Michael Latta, is about $100k too expensive. Mitchell is a rugged winger who is enjoying his time at Camp Oates (and skated alongside Martin Erat and Mathieu Perreault in Philly the other night), Latta an even-more-rugged pivot (and the "other guy" in the Erat trade), and Wellman a more-skilled center who is a classic AHL/NHL 'tweener with some offensive upside.

Which one of those guys - if any of them - start the season in Washington might depend on Brooks Laich's health and the team's perceived needs in his potential absence. Of course, if Laich is going to need more time than we've been led to believe (and it's worth pointing out that he did skate with the team this morning, so... fingers crossed), a trip to the Long-Term Injured Reserve list would make most of the salary cap questions moot for the time being, as the Caps would be allowed to exceed the cap by his $4.5-million cap hit.

Anyway, anything can happen between now and then, but those are four longshots to make the club that heads to Chicago for opening night in less than two weeks. Dark horses indeed.

Our second question this week (and we'll let Rob handle it and take it where he may) comes from our comments, and while it's a bit old, it's all-of-the-sudden sorta topical:

My initial response when I saw this question was "not likely." Most offensively talented players that can play center do play center. It's an easier position to control the ice at a younger age, so the offensive difference makers are frequently funneled to that position, especially in Canadian Juniors (where Erat did spend some time), it seems. While Erat is a nice skater, a good passer, and defensively responsible, all things you look for in a center, I assumed that if he could handle the position in the NHL he already would be playing there. Barry Trotz is a good coach, and the Nashville Predators roster wasn't exactly loaded with talent down the middle (that is, until you get to the crease) during Erat's tenure there. It would have been a surprise if he was capable of playing second line center but the Predators never figured it out.

Of course, Adam Oates is pretty smart in his own right, and has recently taken to experimenting with Erat as a C. While I previously assumed that Trotz was smart enough to know whether or not Erat could play C, I'm also a huge Oates fan and I'm willing to give him the benefit of the doubt on something like this. As noted above, Erat does have some objective skills that make for quality centers, so there's a chance the experiment could succeed. Now that Mikhail Grabovski is in the fold, it's unlikely the Caps would need Erat to play second line C, but it would be nice to have that depth and versatility should the need arise.

And while we are talking about Oates' experiment with wings playing center, we'll discuss Eric Fehr as well. Fehr doesn't have the same skill set as Erat: he's not as good a skater or passer, and has never been considered an especially stout defensive player. His big frame, hands around the net, and good shot make him sound like a natural wing, but he played center against the Philadelphia Flyers the other night, tallying two helpers and winning more draws than he had in his entire NHL career to date, a total of 54% on the night. Obviously, one game of pre-season competition isn't going to prove that Fehr is all of a sudden a capable NHL center, but it's not an utter failure either so it's worth another look. It's also nice to know that Fehr's shoulders look to be in good enough health that he and Oates both think he can take the regular beating of taking NHL faceoffs.

Ultimately, the only reason the Caps would truly want either of these guys to play C would be in the case of injury, as neither of them are superior options to the natural Cs throughout the lineup. But injuries will happen, and any time a team can use a position of depth (the wings, in this case) to bolster a position of lesser depth, it's a benefit, and only increases the flexibility and options that were already provided to Oates when Grabovski was added to the team.