Continuing our look at the Division's top ten by position, moving on to the left wing

We've looked at the Metropolitan Division's top ten goalies and the top ten defensemen. Now it's time to break into the forward ranks with a look at the Division's top wings - starting on the left. And away we go...

Ruutu's ten-year NHL career has been somewhat marred by injuries, as he's appeared in only 549 games during that time. The injury bug would continue into the 2013 season, as the thirty-year-old winger underwent hip surgery in early January and missed the first two-thirds of the campaign. When he returned, he pretty much picked up where he'd left off in previous seasons, averaging about a point every other game (and picking up his second-highest points-per-60 in the last five seasons, fourth-best on the 'Canes last season). Another player for whom the disclaimer "if he can stay healthy" always seems to apply, he nonetheless provides Carolina with a potent second-line attack - although with his physical style and with a points-per-game rate down significantly the last few years, perhaps the wear and tear is starting to wear and tear him down.

One-third of Carolina's dangerous top line, Tlusty broke out in the 2013 season, scoring or assisting on almost 30% of the Hurricanes' 128 goals. Along the way he set career highs in goals and points, topping the marks he set in the 2011-12 season despite the lockout-shortened season. The majority of his damage was done at even strength (which was either because of Carolina's 14.6% power play rate, fourth-lowest in the League, or one of the reasons for said power play rate), and his goals-per-60 at even strength of 1.65 was the second-highest in the League, just shy of the top mark set by Jonathan Toews. Tlusty's shooting percentage is probably due for a bit of regression in 2013-14, but if he continues to skate alongside Alexander Semin and Eric Staal, the points will likely continue.

With just two full ("full") NHL seasons under his belt, Hagelin has already established himself as a fairly consistent producer of secondary scoring for the Rangers and didn't seem to miss a step in his sophomore season. Only twice this season was he held off the scoresheet for more than three consecutive games, going pointless in the first seven games of the season and then another seven-game stretch at the end of March/beginning of April. Six of his twenty-four points were scored in the final month of the season when the Rangers were fighting for a playoff spot (and then playoff positioning). Hagelin doesn't get a ton of ice time, averaging about 17 minutes a night, but he has the ability to play on both special teams as well as at even strength (even if his now former coach thinks he stinks), and has finished among his team's top-six scorers in each of his two seasons so far.

The forward half of the Schenn Brother duo, Brayden completed his first full season with the Flyers - and his first full NHL season overall - with the team's fifth-highest point total. A little over a third of his points were scored with the extra man, as Schenn averaged over two minutes of ice time a night as part of Philadelphia's second power play unit despite having the team's eighth-highest ice time overall among forwards. His 26 points surpassed the career-high set in 2011-12 by eight while appearing in seven fewer games in 2013. The Flyers will start the 2013-14 season with the sixth-oldest squad in the NHL, but at just 21 Schenn is part of a group of young Flyer forwards with some decent potential.

An injury cut his 2013 season short - as well as his 2013 playoff run - but Erat's brief time with his new team was promising, as he showed a knack for strong puck possession that had been lacking on the Caps' second line (even if he did have the worst CF% on the team during his brief playoff appearance). Erat has had pretty decent numbers over the course of his career, despite playing in a bit more restrained offensive system in Nashville... to put it mildly. And while his initial tryout with the Caps was brief, one would imagine that the added freedom that comes from playing under Adam Oates's system should make those decent numbers climb. We hope.

Elias is one of the Division's elder statesmen (although hardly the oldest on his old team) - and yet he's continued to produce at a fairly high level, his 36 points the highest on his team in the 2012-13 season. He's led the Devils in even strength points-per-60 in each of the last three seasons, is a puck possession monster and is among the team leaders in ice time; along with his even strength prowess, Elias has continued to be a force on special teams, racking up over a minute and a half on the penalty kill each night while also logging three and a half minutes on the power play - and he made the most of all that ice time with the extra man, picking up 14 power play points (tied for the team lead with the now-retired Ilya Kovalchuk), five of which were goals (second-highest on the Devils behind David Clarkson). He may be 36 years old, but Elias doesn't seem to have lost a step just yet.

Just another part of Carolina's potent top-six offense, Skinner experienced a bit of a dropoff in his third NHL season, seeing his points/game and points/60 at even strength take a substantial dip (after leading his team in the latter category in his first two seasons). At just 21, Skinner has plenty of potential to bounce back and be a top point producer in the League - especially if he stays alongside players like Jordan Staal. That said, one concern with Skinner going forward is with his health, as the young forward has already reportedly suffered three concussions - including two last season alone. The talent is there, though, if he can stay healthy... and doesn't have a hissy fit over his spot on this list.

One of the more underrated wingers in the Division, Moulson very quietly put up almost a point per game last season, trailing Hart Trophy Finalist John Tavares by just three points when all was said and done. It's actually a position with which he's fairly familiar, as he's finished second in scoring to Tavares in each of the last three seasons (although never by such a slim margin). Of course some of that success behind Tavares is because of his spot alongside Tavares, but Moulson has been good for at least 30 goals in each of his three full 82-game campaigns with the Isles. While he fell just off that pace this season with "only" 15 goals, he did have 14 multipoint games - the second-most he's had since joining the Islanders in 2009. He's also something of an iron man, having missed just one game since becoming a full-time NHLer in the 2009-10 season (an early April game last season that he sat out due to illness).

Over the course of his ten-year NHL career, Kunitz has established himself as a pretty consistent point-producer, but he - like his team - got red-hot in the 2012-13 season, putting up 52 points in 48 games. Not only was that his third-highest point total in his career, it was also the second-highest total on the League's best offense (trailing just some guy named Sidney Crosby). He also put up the Penguins' third-highest power play point total with 18, despite averaging about 30-40 seconds less with the extra man than the guys ahead of him (Crosby and Evgeni Malkin). Of course, like Moulson, Kunitz has benefited from his spot next to a Hart Trophy Finalist and had a bit of a dropoff in point production after Crosby's injury at the end of March. Still, it seems like just yesterday that the Pens were looking for wingers who meshed with Sid - and four years later it appears that Kunitz certainly has.

When the Rangers sent Brandon Dubinsky, Artem Anisimov, a prospect and a pick to Columbus for Rick Nash last summer, it raised some eyebrows - and some questions about whether the former Blue Jackets captain would be able to make it in a big market like New York. So far, Nash has proven himself more than up to the challenge (at least in the regular season). In his first season with his new team, Nash put up a very symmetrical 21 goals and 21 assists, the former putting him in the top ten League-wide. His points-per-60 at even strength was a very impressive 2.77, which led all Rangers in the 2012-13 season, and his 9 power play points good for second-best (albeit on a fairly weak power play team overall). A big body who is tough to shut down, Nash remains the most potent threat from the left wing in the Division.

Below, a look at how each of our ranked players (along with the honorable mentions) was used last season: 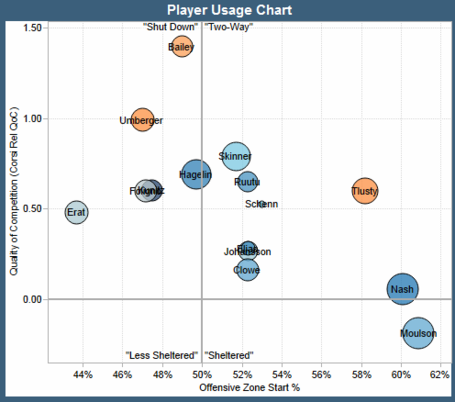