From Alzner to Ward, we're taking a look at and grading the 2013 season for every player who laced 'em up for the Caps for a significant number of games during the campaign, with an eye towards 2013-14. Next up, Martin Erat.

Japers' Rink Player Card (click for hi-res version; a glossary of terms used in this post can be found here; data via Behind the Net, Hockey Analysis, CapGeek and NHL.com; stats mostly accumulated for the Predators, but rate stats are ranked against Caps; h/t Habs EOTP): 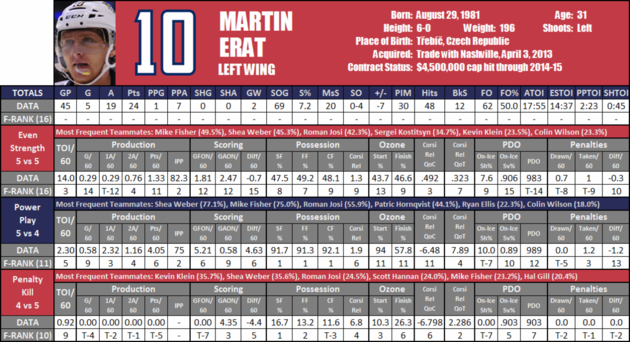 Erat and his most frequent linemates: 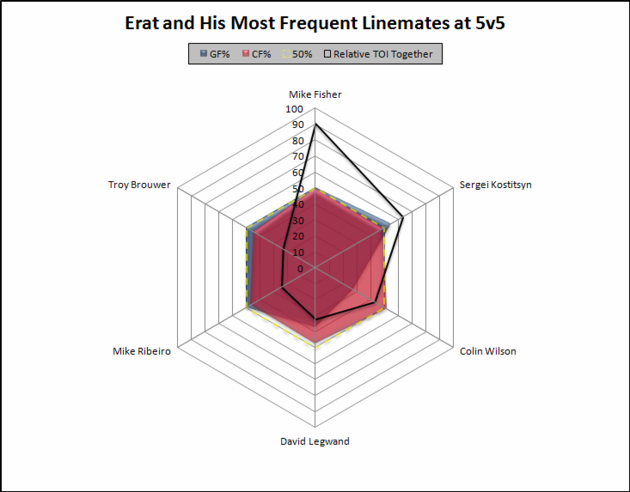 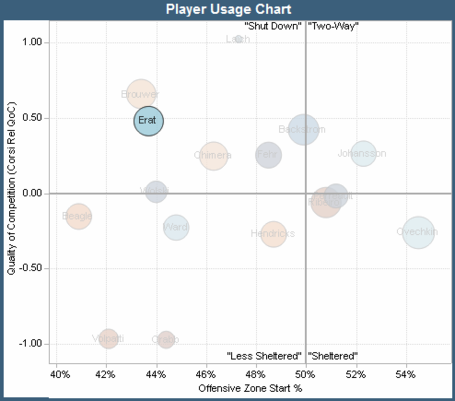 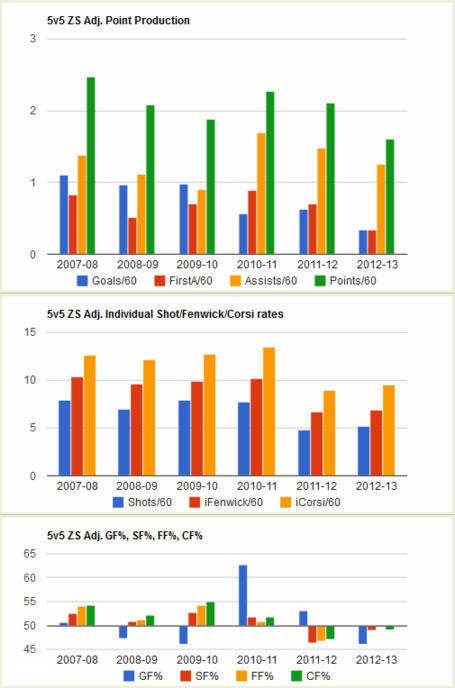 Key Stat: Erat missed six of the 19 games the Caps played after he was acquired, including the last three games of the playoffs with a broken elbow.

Interesting Stat: Erat was the only Cap skater who played in the playoffs and wasn't on the ice for a single goal-against. 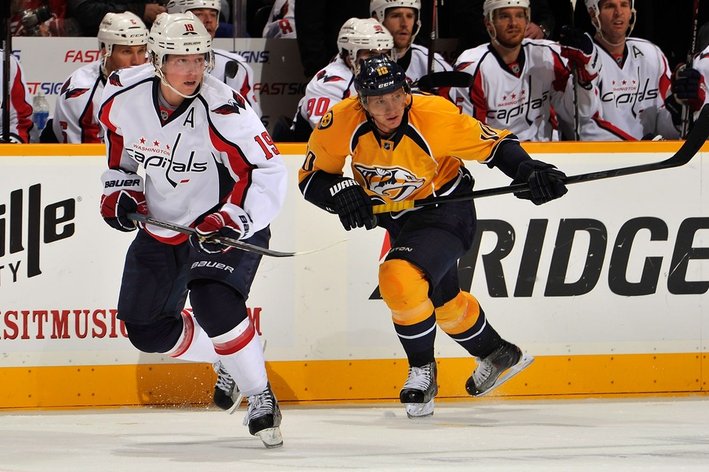 The Good: The Caps made a big splash when they went out and acquired Erat and a minor leaguer at the deadline in exchange for blue-chip prospect Filip Forsberg. But a late-season knee injury and the tragically bizarre play on which he broke his elbow (and was whistled for a penalty) in Game 4 of the Rangers series robbed the Caps of getting what they expected from the versatile veteran, at least in this first look.

What they did get was glimpses of a player who would appear to be a good fit for Adam Oates's system. Erat is a good puck-possessor (over his nine regular-season games, he was on the right side of 50% in each of the major possession metrics in close situations, despite playing with a pair of skaters in Mike Ribeiro and Troy Brouwer who struggled all year in those same metrics), he can play in all situations (he was one of four Caps forwards, along with Brouwer, Nicklas Backstrom and Joel Ward, to average more than a minute on each special teams unit), and he's a talented playmaker (there's not much to work with here, so just peep this helper again).

The rest of "The Good"? Like everything else in Capsland, it's "wait 'til next year..."

The Bad: Until the day he was traded, Filip Forsberg was assumed to be a big part of the Caps' future, so even though the team has Erat under contract for next season, the clock was ticking from Day One and the Caps needed some early returns on their "win now" gamble.

They didn't get them.

As noted above, Erat missed six games (and change) due to injury and failed to get on the scoreboard in 11 more, leaving just two games in which he registered a point for Washington. The sample sizes are tiny, of course, but Erat's 0.11 goals-per-game in D.C. was his lowest since his second season in the League (a year he spent mostly in the AHL), and his 0.22 assists-per-game was a career-low. Perhaps more troubling, that goal rate was consistent with what he did in Nashville over his first 36 games of 2013. Much of Erat's drop in production can be attributed to a dramatic reduction in power-play time upon arriving on a team that has better options of forwards to play on its power-play than the Predators had (Erat's power-play ice time dropped from 2:45 per game to 1:06), but it's hard to look at the "past six seasons" chart above and not be at least a little concerned that the 31-year-old might be aging quickly.

Erat was surprisingly ineffective in the playoffs, not just on the scoresheet (where he didn't make an appearance other than to be penalized for breaking his elbow), but he actually had the worst Corsi rating on the team (and only fourth-liners placed behind him in other possession metrics) and only managed three shots on goal.

Put simply, Erat's going to have to have a big 2013-14 for Caps fans - and management - not to have some remorse on a move that perplexed many an onlooker at the time.

The Discussion: Do you feel any differently about the trade that brought Erat to Washington today than you did when the deal was made? Could Erat be insurance in the event the team lets Mike Ribeiro walk? What role do you see Erat best-suited for in 2013-14? What would it take for him to earn a "10"?