Continuing our look at the Metropolitan Division's top 10 at each position, continuing on the blue line

Share All sharing options for: The Metropolitan Division's Top 10 Defensemen: 2013-14

Last week we took a look at the new Metropolitan Division's top ten netminders - today we'll look at the guys whose job it is to protect them, the defensemen...

With the departure of Adrian Aucoin to free agency, this season will see Tyutin take over as the elder statesman on the Columbus blue line... at the ripe old age of 29. In his five seasons with the Blue Jackets he has been one of their go-to guys, routinely among the team leaders in ice time with around 23-24 minutes a night on average. He's also a consistent point producer, good for about 25-30 points a season - and in the 2013 season he scored at the highest points-per-game rate of his career.

After a fairly shaky 2011-12 season (and an up-and-down start overall to his career as a Penguin), Martin rebounded with one of his best offensive seasons to date while helping to provide at least a bit of defensive responsibility to an offensively dynamic team. His average 25:20 of ice time trailed only Kris Letang for the team lead, but his GA ON/60 was one of the lowest of the Pens' top six. Meanwhile on the other side of the ice, he racked up six goals on the season (besting Letang by one, in one fewer game) - a mark which tied a career-high he set over the course of a full season nine years ago.

An elite power play quarterback, Streit has feasted on opponents with the extra man over the course of his career. In the seven years since he made his debut with Montreal, Streit has 141 power play points (36 goals, 105 assists) - just three shy of his even strength total (27 goals, 117 assists); he also has the sixth-most 5-on-4 points of any defenseman in the League over the last six years. He's gotten more defensive responsibility since joining the Islanders, too, jumping from a second- or third-pair defenseman to the top duo (and a less-than-stellar plus-minus that goes with playing that many minutes in front of some of the Islanders' past goalies). And the fact that his points-per-game rate is higher against the Caps than any other team in the East... well, that's a little scary.

Timonen hardly needs an introduction to Caps fans, as the veteran blueliner has been leading the Flyers' defense for the last six seasons. And in a down year for his team last season, he was also a leader in offense, his 29 points sitting at fourth-highest on the Flyers last season (and not all that far off his totals from previous - full - seasons). At 37, Timonen's no spring chicken (and in fact is the oldest on this list)... but he doesn't seem to have slowed down all that much in recent years.

The epitome of the John Tortorella-era, shot-blocking Rangers machine, Girardi has been among the League leaders in that department - and has quite a few on his resume against the Caps over the past few years, particularly in the playoffs. Never one to put up huge offensive numbers (despite for some reason getting a good bit of power play time), Girardi is a true shutdown defenseman, drawing big minutes against tough competition on a regular basis. He may not get leaned on quite as much by new bench boss Alain Vigneault, but one would imagine he'll continue to see the Metropolitan Division's top guns night after night - and continue to sacrifice the body against them.

At just 22, Hamonic has already established himself as one of the better young defensive-minded defensemen in the NHL. He's been given big minutes in New York, at even strength as well as on both special teams units (which may have contributed to him being on for a team-leading 68 goals-against, tied for second-most in the League) but he routinely faces the toughest competition thrown at the Isles, and it's clear his team trusts him to be the future of their blueline, as they rewarded him with a big seven-year contract extension last month.

When it comes to Green, almost everything positive that can be said about him unfortunately comes with an implied caveat - "when healthy". Early in his career, the knock on him was his at times lackadaisical approach to the defensive zone; in recent years, however, it's come down to a matter of health. That said... when healthy, he can drive the Caps' offense like nobody else (even if the results haven't always been there at even strength). Despite playing in only 35 games last season, Green managed to put up more goals than any other blueliner and finished in the top twenty among defensemen in overall scoring - all while posting a respectable GA ON/60 of 2.44. Now if only that 5-on-5 scoring would come back...

After experiencing something of a sophomore slump in 2011-12 - at least until the playoffs - Carlson bounced back with a pretty impressive 2013 campaign. He racked up loads of ice time, proving himself to be reliable in all situations as one of just thirteen blueliners to average at least 2:45 of shorthanded ice time and 2+ minutes on the power play). In his first full season away from his usual partner, no one on the Caps faced tougher competition on a nightly basis than Carlson, and yet he still managed to set career highs in even strength goals-per-60 and points-per-60. Real American Hero? Indeed.

Was there a bigger steal of a trade in recent years than the one that saw Scott Gomez depart New York for Montreal in exchange for McDonagh? At the time of the swap, McDonagh was nothing more than a promising young defenseman with potential; since then, he's made a name for himself as much more than just the guy who freed the Rangers of Gomez, becoming his team's go-to guy in all situations and making up one half of their studly top defensive pair (along with Dan Girardi). While their over-reliance on him may have cost the Rangers on occasion, more often than not it's paid off... and he's only 23.

There may not be a more dynamic offensive defenseman in the Metropolitan Division - or the NHL - right now than Kris Letang. While one could say he's the beneficiary of a pretty prolific group of forwards, one might also suggest that he's a big reason they've been so prolific. No one scored more points-per-game last season than Letang, who finished the year tied for the League-lead in scoring among defensemen with PK Subban while playing in seven fewer games. What he at times lacks in his own end (particularly this past spring) he more than makes up for with playmaking ability, his 33 assists five better than the next-highest scoring defenseman and good enough for 15th among all skaters.

All of that led to Letang being selected as a Norris Trophy finalist for the first - but probably not the last - time in his career. And with a hefty contract extension inked earlier this summer, looks like we're stuck with Letang for quite a while.

So there you have it - the Metropolitan Division's best blueliners; below is a usage chart for all ten (plus honorable mention) defensemen via Hockey Abstract: 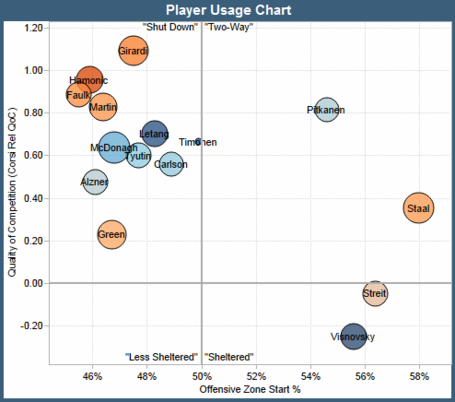