Little Green Apples: Where Did All of Mike Green's Even-Strength Assists Go?

Share All sharing options for: Little Green Apples: Where Did All of Mike Green's Even-Strength Assists Go?

Over the nearly three seasons from when Bruce Boudreau replaced Glen Hanlon as head coach of the Washington Capitals through the end of the team's Presidents' Trophy-winning 2009-10 season, Mike Green was the single most prolific defenseman in the sport. In 204 regular season games, he scored 65 goals and had 133 assists, with 102 of those points coming at even-strength. Only Duncan Keith (the only blueliner to top Green in 2009-10 Norris Trophy voting) came close to Green's five-on-five point total over the full three-year span, and that was in 15% more minutes. Green led all rearguards in both goal and assist rates at fives, and, among Eastern Conference defensemen, he had the best Corsi percentage (and second-best goals-for percentage, trailing now former teammate Jeff Schultz).

Green was either the engine for or a beneficiary of (or a bit of both) a Caps team that was a similarly impressive offensive juggernaut, a scoring machine that led the League in both even-strength and power-play goals culminating in a 2009-10 campaign in which they tallied 19% more five-on-five goals than second-place Vancouver and had the most efficient power-play in the NHL by a margin of more than three full percentage points. 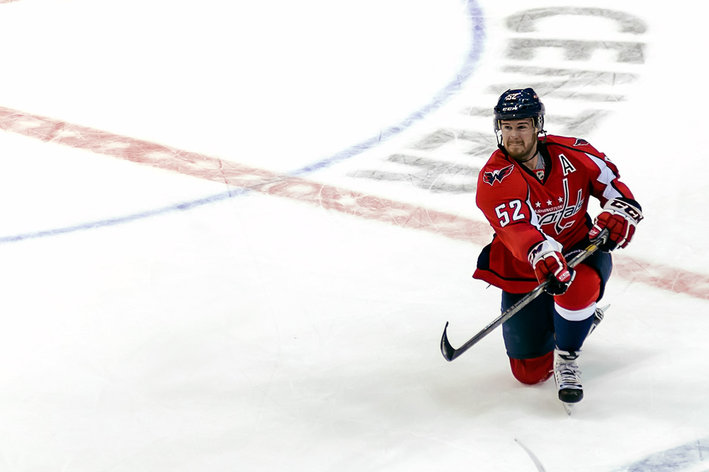 An in-depth look at the blueliner's 2013 season

The three years that followed that peak haven't been nearly as awe-inspiring for either Green or the Caps, as he's struggled to stay healthy (playing just over half of the team's regular season games) and his offense has dropped off, and the team is on its third head coach since the start of the 2011-12 season as it desperately tries to stabilize and get back headed in the right direction.

After an encouraging truncated 2013 season, there's reason to believe that the ship has been righted under the direction of its new captain (figuratively speaking) and resurgent old captain (literally speaking). One of the keys to 2013's modest success, of course, was the most efficient power-play unit in a generation, and Mike Green was an integral part of it, piling up big minutes and big points.

But what of Green's even-strength production? Well, he once again led the League in even-strength goals by blueliners and was among the leaders in shot rate. That's the good news. The not so good news is that Green - the NHL's top assist-generator from the blueline over a three-year span - had all of four even-strength helpers in 35 games in 2013. To put that in some perspective, that's half as many as Steve Oleksy had (in seven fewer games than Green), two fewer than Jack Hillen had (in a dozen fewer games), the same number as Karl Alzner had, one more than Jeff Schultz had (in nine fewer games), and so on. In 2013, Mike Green had two primary assists at five-on-five (on the plus side, that's twice as many as he had in 2011-12), and they both came within the season's first 13 games, meaning Green played the final 22 games of the season without registering a single five-on-five primary assist; his two secondary helpers came in back-to-back games in late April to break a string of 19 games without a five-on-five assist. (He did add a primary assist on a Troy Brouwer five-on-five goal in Game 4 of the Rangers series, for what it's worth.)

Those are some pretty staggering numbers, and they're part of a concerning turn. Take a look: 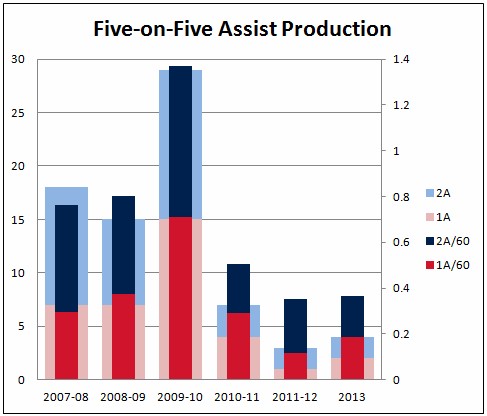 The chart (data via HockeyAnalysis) is pretty straightforward - primary (1A) and secondary (2A) assist totals are plotted against the left vertical axis, rates (1A/60 and 2A/60) against the right. But the columns tell the story on their own, don't they? Whether it's the injuries, the system changes, the dwindling depth up front or something else, Green's five-on-five assist rate has plummeted to less than half of where it was in the two seasons leading up to 2009-10, and less than a third of his rate in that borderline magical season.

All of that speaks to the quantity of Green's five-on-five assists over the last three seasons, but what about something more descriptive regarding the quality of those helpers? Below are all 21 (including five from the post-season), broken out by primary (red) versus secondary (blue), and mapped (from the point he gave up the puck) with the Caps shooting at the goal on the right:

(One thing to note here is that Hockey Analysis has Green with seven five-on-five assists in 2010-11, but we found nine... not sure why the discrepancy, but it doesn't change the underlying points here.)

You can click on the image to enlarge it, and to see details - including videos - on each of the assists on the map, click on this nifty button:

Qualitatively, Green's assists over the past two seasons barely resemble "vintage" Mike Green; fewer were created off the rush, and more had less to do with Green's individual skill. Of the 21 goals mapped, 15 came in 65 games played while Boudreau was the coach, one - literally, one - came in 38 games played under Dale Hunter, and five came in 42 games played with Adam Oates behind the bench. Again, it's important to note that his goal and shot rates were terrific in 2013, and if goalies had just stopped a couple more of those shots and left juicy rebounds for Caps forwards to deposit, this is a slightly different discussion. Still... half as many helpers as Steve Oleksy.

Green's assists over the past two seasons barely resemble "vintage" Mike Green; fewer were created off the rush, and more had less to do with Green's individual skill.

What's also apparent from the map is that most of Green's primary assists came from offensive zone touches, and most of the secondary helpers came when he gave up the puck on his side of center ice, both of which make sense intuitively. It also makes sense, intuitively, that as the Caps have seen their possession metrics and goal totals drop over the past three seasons, Green has seen his opportunities for assists diminish as well... or is it the other way around? There's a lot of chicken-or-the-egg going on here, and plenty of "egg" to go around, but one point worth noting is that during the first three-year span we're talking about here, Green registered a point on 41.3% of the five-on-five goals the Caps scored, which was the third-highest percentage among NHL blueliners; over the past three seasons, that number has dropped to 31.6%, 62nd in the League (and his Individual Assist Percentage is 136th, tied with... Karl Alzner). The names at the top of these lists are your offense-generating defensemen. The names further down? Not so much.

When Bruce Boudreau arrived in D.C. and took the training wheels off of Mike Green, the defenseman exceeded everyone's reasonable expectations for what he might be capable of. His skating was gorgeous, his shot deadly, and his passing touch deft. Injuries and coaches have slowed him down since, but a relatively healthy and power-play productive 2013 has provided Caps fans with some hope that the Green of old may be on his way back. Heck, even Green's overall even-strength production - 1.0 points-per-sixty - isn't all that far from where he was in his first Norris-finalist season of 2008-09 (1.3). But it's unlikely that he's going to be able to convert on 11.9% of his even-strength shots going forward, as he did in 2013 (that's more than twice his 5.7% shooting percentage over the previous five seasons), so the assist rate is concerning for a player who is comfortably among the top-five skaters expected to generate even-strength offense.

To the extent that Adam Oates "fixed" Alex Ovechkin in 2013, his reclamation project for 2013-14 should be Mike Green. After all, as Mike Green goes, so goes the offense... and vice versa.

[Ed. note: Thanks to Broadstreet Hockey for some of the substantive and stylistic inspiration for this post.]