Brooks Laich and Martin Erat played a total of 22 games for the 2013 Caps (just one together), combining for two goals and five assists. That's four fewer games than Jeff Schultz played, as many goals as Joey Crabb scored, and as many assists as Wojtek Wolski had. 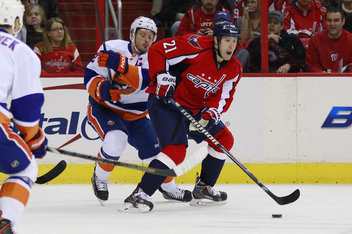 Brooks Laich will start the year as second pivot. Let's take a lot at how he stands up against others of his ilk.

As minimal as their respective impacts were on the 2013 team (Laich due to injury and Erat due largely to being a trade deadline acquisition who would miss the second-half of the Rangers series due to an injury of his own), the two are going to be counted on to be significant contributors to the 2013-14 squad, anchoring a second line alongside Troy Brouwer that will see Laich shift back to his "natural" center position. The trio should have a solid defensive conscience, with Laich and Erat frequently praised for their two-way play and all three men among Adam Oates's penalty-killing leaders (for what that's worth). Questions remain as to how much offense the threesome will be able to generate, given a perceived lack of playmaking and creativity, but hockey remains a game that is won by outscoring opponents, not by scoring alone - if the second line can score more goals than it yields, it will be effective (particularly if it's used against opponents' top lines and in other difficult deployments).

Both Laich and Erat carry with them a $4.5-million cap hit for 2013-14, and with the Caps closing in on the salary cap ceiling, the question is whether or not they're worth that much. Laich's versatility (he can credibly pass for a scoring-line winger or a checking-line pivot) certainly has value, but what can he be reasonably expected to deliver as a scoring-line center, given that over the past six seasons he has one of the worst Individual Points Percentages in the League (and scroll down a little further to find Brouwer)? That puts a heck of a burden on Erat to provide playmaking from the wing, and while his IPP and primary assist rate (compiled mostly for offensively-challenged Nashville) says he may be able to handle it, but a disappointing first impression in D.C. (not to mention lingering skepticism over the deal that brought him here) has tempered some of the optimism Caps fans may otherwise have had.

So what does the market say? Via CapGeek, here are Laich and Erat's 19-closest cap comparables (click to enlarge): 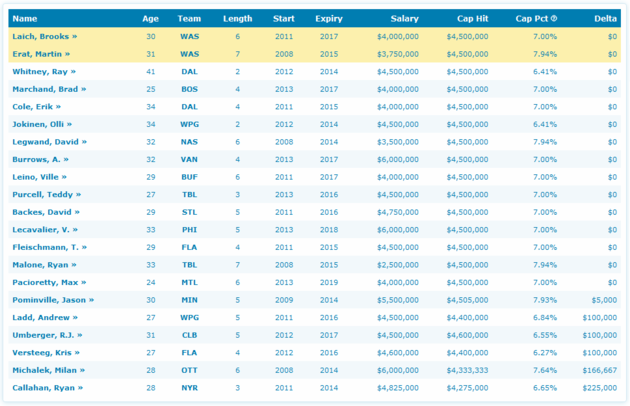 As was the case when we did this exercise with Brouwer, each of these deals is different, and variables such as restricted versus unrestricted free agency, terms versus dollars and the years in which the respective deals were consummated make them difficult to fairly compare. But that's a list of forwards that will carry with them cap hits right around $4.5 million in 2013. How do Laich and Erat stack up? On the surface, this list of comparables is a bit of a feast-or-famine group of contracts. Players like Andrew Ladd, David Backes, Max Pacioretty, Ryan Callahan, Milan Michalek, Brad Marchand, old man Ray Whitney and buyout "survivor" Vincent Lecavalier appear to be solid-to-terrific deals at this price, while Olli Jokinen, Erik Cole, Ryan Malone and Ville Leino... not so much. At all. This is the NHL's upper-middle class - they're not among the League's top-50 cap hits for forwards, but not far behind; bargain top-line talent and well-paid second-liners... for the most part.

Production-wise, the 19 non-Caps have averaged 25 goals and 32 assists per 82 games over the past two seasons. Laich, for his part, has averaged 15 goals and 25 helpers per 82 over the same span (playing mostly on Dale Hunter's second- or third-line), while Erat has come in at 17 goals and 41assists (playing mostly for the Preds). Perhaps more importantly, the 19 non-Caps have averaged 74 games played per full season over the past two, while Laich and Erat have averaged 57 and 73, respectively. Erat's production is in-line with this batch of comparables. So was Laich's... in his most prolific seasons. 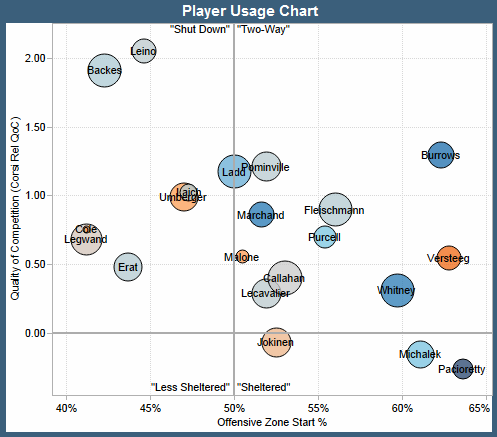 There is certainly a handful of players on the list who are simply better than Laich and Erat, and some that are better at roles for which the Caps don't have Erat or Laich slated. At the same time, there are players who aren't nearly as productive or capable as the two Caps, and those who don't fit the roles the Caps intend to fill with these two players. But neither Laich nor Erat looks out of place in this grouping, and both could provide the Caps good bang for the buck - if Laich turns out to be an adequate second-line center, he'll be near the top of this group (of mostly wings), and if Erat had been a free agent this summer, he'd probably have priced himself out of this group (based on the deals that have already been handed out).

It's worth noting here that, with 11 forwards signed, the Caps have the highest cap hit per forward in the NHL at $3,425,466 per man. That number will likely come down some when Marcus Johansson gets signed and a 13th forward is added to the list (be it Michael Latta, Tom Wilson or someone else), but that's still a somewhat surprising stat, given that the Caps are a team that most onlookers assume will struggle to score goals going forward. It's also worth noting that both Laich and Erat will earn significantly less in salary this year than their respective cap hits, which helps the Caps' bottom line (which isn't a bad thing, especially if the team's internal budget allows them to take advantage of that savings).