Guessing at the Rocket Richard winner's follow-up total and the Caps' blurred lines in our latest installment of "you ask, we answer"

Our first question this week asks us to look into the crystal ball and forecast the captain's near future:

I'm writing with a question about Alex Ovechkin.

I read The Noon Number on September 10 with the poll about Ovechkin's goal scoring rates for the 2013-2014 season. The results currently sit at 58% in favor of Ovechkin scoring 50 goals or more this season. I've seen projections as high as 60 goals for him on other sites.

I'm wondering where you stand, personally, on the topic. Do you have a range in mind for Ovechkin? I tend to think a lot of these projections are coming in on the high end and think something in the neighborhood of 40 seems much more in line with his scoring levels and shot totals.

Let me start by noting that Mike is the founder and chief editor of Left Wing Lock, a really terrific online fantasy hockey resource (and, really, you can delete "fantasy" from that description). Also, while 58% of our readers voted "50+," more recently only 3% of them thought Ovechkin scoring 49 was the most likely of four over/unders, so... perhaps they were a little overzealous early on.

Anyway, let's do some back-of-the-envelope math and see if we can't narrow down a range a bit. First, let's try to figure out how many shots to expect. In 2013, Ovechkin fired a League-leading 220 shots on net in 48 games for an average of 4.58 per game. That number jumps a bit if you want to throw out a certain number of games at the start of the season to account for acclimating to a new system and position and playing with Mike Ribeiro instead of Nicklas Backstrom (to 4.75 if you scrap the first quarter of the season and 4.98 if you trash the first half), but let's take a conservative approach and use that 4.58. That's a lot more than the 3.88 he averaged in 2011-12, but still the second-lowest mark of his career.

Alex Ovechkin Finds His Even Strength 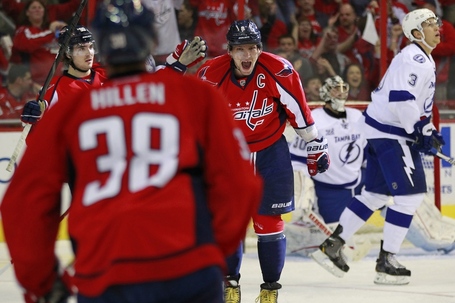 Moreover, he barely reversed the downward trend of his even strength shot rate... if he did at all, so a huge portion of the bump came as a result of increased ice time and/or the power play. Indeed his shots-on-goal-per-sixty at five-on-five went from 10.4 under (mostly) Dale Hunter to just 10.9 under Adam Oates (as a point of reference, back in 2008-09 that number was 15.0). For a guy getting 15 minutes per game at fives like Ovechkin did, that's a difference of one extra shot on goal every eight games and one or two goals over the course of the season. As you might expect, then, Ovechkin averaged an even strength goal every 3.1 games in 2011-12 and one every 3.0 in 2013.

The power play, of course, was a different story, both in terms of shots and production. His shot rate jumped from 17.3 per sixty to 20.6 and his shooting percentage spiked from 16.9% to 22.5% (more than double his two-year shooting percentage of 11.25% from 2010 through 2012) as he scored 16 times with the extra man - it's almost as if moving him off the point and much closer to the goal was a good thing. And those 16 goals? His most since 2008-09 and the highest per-game power play goal rate of his career.

But at some point, opposing penalty kills have to try to take away his shot, don't they? When they do, it may ultimately be a good thing for the Caps' power play (as oppositions' singular focus on not letting Ovechkin beat them will take away the ability to defend the Caps' other lethal options), but it won't be a good thing for Ovechkin's numbers. On top of that, Ovechkin isn't going to score on more than one out of every five shots on the power play again - guys who shoot that much rarely convert as often, and Ovechkin's own 5v4 shot percentage over the last six years is 14.24% (but again, that includes a lot of time spent firing puck from literally as far from the goal as possible while still being in the zone).

Ultimately, I think last year's "bounce-back" had a lot more to do with the power play than five-on-five play, and I don't necessarily see that changing, so let's give him an even strength goal every three games (nearly exactly his rate over each of the last three years with three different coaches and three different systems), and let's say he plays 78 games. That's 26 goals. And if we give him four-and-a-half minutes of power-play time per night (in the ballpark of his average over the last four seasons and last year), a somewhat conservative shots-per-60 rate in those minutes of 16 and a reasonable (perhaps conservative) shooting percentage of 15%, that gives him another 14 goals, and a grand total of... 40. Bump the shooting percentage to 18% and there's another three goals.

Our second question this week (and we'll let Rob handle it) is a mash-up of two questions, from two social media platforms, and centers on the second line(s):

Let's start with the second question. The Erat/Forsberg trade will be disputed among Caps fans for years - that's just the nature of the beast. One of the factors that makes the analysis a bit murkier is the fact that Erat's contract will likely expire before Forsberg is an impact player in the NHL (if he ever is). That means that unless Erat signs an extension, he'll be gone from Washington before we find out how good Forsberg really is. What happens in the interim will go a long way to determining how the trade looks; it won't be decided just based on this season. If the Caps have a couple long playoff runs with Erat, the sting of losing Forsberg probably dissipates. If the Caps keep crapping out in the first round and Forsberg becomes a top six wing, expect a lot of angst from fans for years to come.

As for the characterization of the Caps' lineup this year, I'd dispute the assertion that the Caps have three second lines. I see two second lines, but the nominal fourth line will end up being a third line, at best. I don't see the personnel that makes a third second line. Still, the depth in the lineup, much of which is provided by Erat (especially if he can successfully transition to C) is going to make the team dangerous this season. So for fans that are tired of kicking the can down the road, adding Erat to help bolster secondary scoring is going to offset the loss of some potential future secondary scoring.

Every fan has a unique perspective, so there is no singular, all-encompassing answer as to whether the new-found forward depth will quell the concerns over the trade. Some fans perennially overvalue future talent (and I can be guilty of that as well). Some fans want to win now. Where you fall on that spectrum likely determines how you feel about the trade (at least until we see what Forsberg does), regardless of how this season plays out.

More: The Second Line: Into the Unknown How Mikhail Grabovski Fits in on the Capitals

As for the "two second lines" in the middle of the forward lineup, there are a lot of options for Adam Oates, as we've discussed several times. In the wake of the Mikhail Grabovski signing, I wrote that I'd like to see the second line be made up of Erat/Grabovski/Troy Brouwer (if only because he appears to be a lock for the position). However, during the pre-season two things have somewhat changed that picture. First, Grabovski and Eric Fehr have been lighting it up. If they've got some early chemistry, it may be worth playing Grabovski with Fehr, pushing Brouwer to the third line. Second, Oates has been playing Laich with Grabovski on the second line and playing Erat on the third line.

If Oates really likes having Laich on the second line with Grabovski, then it makes sense to make the second line Laich/Grabovski/Fehr, leaving a third line of Erat/Mathieu Perreault/Brouwer. Both of those lines are balanced with passing, shooting, and defense. Both of those lines look like credible second lines. I still think it's more likely that Erat and Brouwer end up on the second line with Grabovski, but I'd like to see whether Grabovski and Fehr can keep up their solid production together - and putting Erat and Brouwer on the third line really spreads the scoring wealth, making the Capitals a much tougher team to defend from a match-up standpoint.