For his first four-plus seasons in the League, Green was pretty healthy, missing a handful of games with a shoulder injury in 2008-09, but otherwise just missing a game or two here and there in the midst of monster offensive seasons that earned him a pair of second-place finishes in year-end Norris Trophy voting. Over the last three seasons, however, Green has played just under 55% of the Caps' regular-season games, and he hasn't been "Mike Green" when he has played. (Then again, hardly anyone in Caps red has looked like their former selves over the bulk of this trio of trying campaigns.) We documented his drop-off in even-strength assist production in some detail, and while that hopefully gets sorted out going forward, Green's power-play production rebounded in a big way in 2013, posting the seventh-highest five-on-four scoring rate among NHL blueliners while quarterbacking the League's top power play (which included the third-highest primary assist rate... yeah, you know the one... perfectly placed pass to what's-his-name on the left for a one-timer). 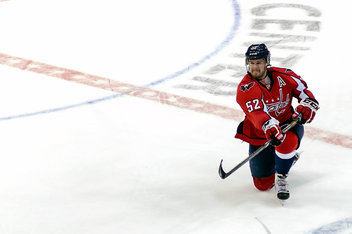 An in-depth look at the defenseman's season

All told, Green's 2013 was good-not-great (though four voters had him as one of the top-five blueliners in the League; we barely had him that high among Metropolitan Division defenders), and certainly a big step in the right direction in terms of overall production, durability and perhaps even defensive responsibility, even if the narrative of his decreased production being the result of an increased focus on defending is just that... narrative. That Green's career appears to be back on track is obviously good news, especially given the three-year, $18.25-million deal the Caps signed him to just over a year ago and the pressure and expectations that come along with it. That was a pretty significant commitment to a guy who hadn't been healthy - or particularly great - in some time, and it showed quite a bit of faith in both Green and the surgery he had in January of 2012. And despite missing 13 games (more than a quarter of the 2013 regular season) with lower-body/groin injuries, the Caps' investment paid dividends in Year One (in Game 2 against the Rangers, for example).

But what does the market say? Via CapGeek, here are Green's 20-closest cap comparables (click to enlarge): 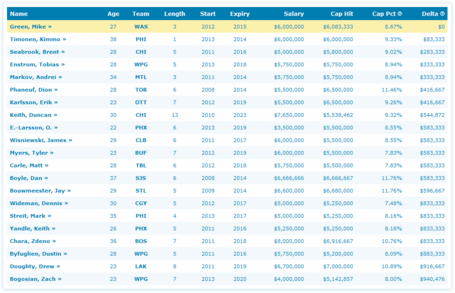 Standard caveats apply here - each of these deals is different, and variables such as restricted versus unrestricted free agency, terms versus dollars and the years in which the respective deals were consummated make them difficult to fairly compare. But that's a list of defensemen that will carry with them cap hits around $6 million for 2013-14 (and you can see from the nearly $2-million range here, that we're getting into rarefied air; indeed Green will have the 10th-highest cap hit of any defenseman in the League this coming season).

How does Green stack up? That's basically a who's who of elite or near-elite defensemen no longer on their entry level contracts (and not playing out a bridge contract before leap-frogging this group, eh, P.K. Subban?), with a few guys who have hit free agency homeruns sprinkled in (we're looking at you, Dennis Wideman). To wit, 11 of the names on that list (including Green) finished in the top-20 in Norris Trophy voting in 2013. 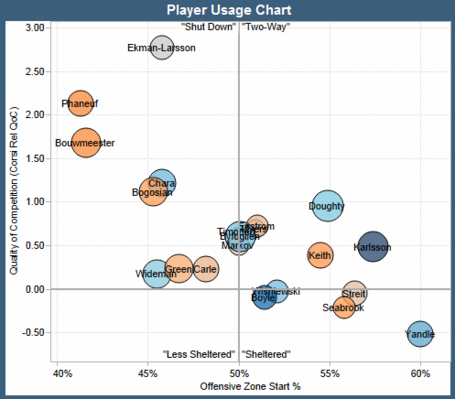 There are guys on the list and chart to whom Mike Green clearly compares favorably, and others who are simply better defensemen at this point... but since durability is a key component of value, it's tough to rank Green here overall, though he's certainly not among the top handful of best deals. Matt Carle, for example, will never out-produce Green over any decent-sized sample, but he's only missed two games in the last four years. Dennis Wideman has missed seven games or fewer due to injury in each of the last eight years while playing 23 minutes per night. Keith Yandle hasn't missed a game since 2008-09. You get the point - when you open up the wallet, production is only part of the equation. And while Green's health will now always be the elephant in the room for him (until it isn't), the fact of the matter is that he needs to be better at five-on-five than he's been for the past few years (though obviously his health plays into that, somewhat, and this seems like as good a place as any to plug our suggestion as to how to limit the wear-and-tear he takes on a nightly basis). But let's also not brush aside power-play production as if it isn't an important part of the game (or that anyone could contribute to the Caps' extra-man unit to the same degree Green has for a half-dozen years).

At just over $6-million per season, it's going to be awfully tough for Green to out-perform his contract, but that's the case with most players in that tax bracket and higher and certainly most of Green's comparables here. And it's easy to look at his deal, realize that his cap hit for the next two years is nearly as much as Karl Alzner's and John Carlson's combined, and wonder if the Caps might be better off spending that money elsewhere. But Green is a legitimate top-four defenseman (something of which the Caps have a bit of a shortage, on the off chance you hadn't noticed) with elite offensive talent who could conceivably be rejuvenated by Adam Oates in 2013-14 the way Alex Ovechkin was in 2013. That's what the Caps were and are banking on, and why not? After all, only 60 forwards and two defensemen played at least half of the 2013 season and averaged as many points per game as Green did - he's one hell of an offensive force... when healthy.