From Alzner to Ward, we're taking a look at and grading the 2013 season for every player who laced 'em up for the Caps for a significant number of games during the campaign, with an eye towards 2013-14. Next up, Mike Green. 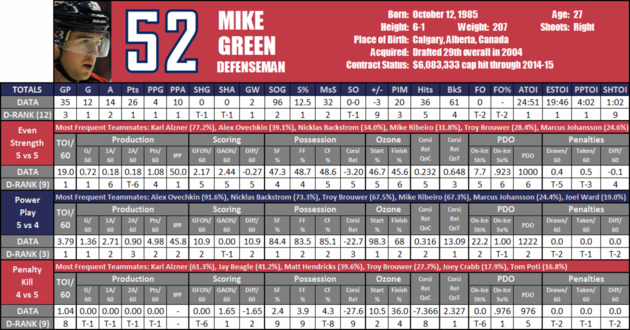 Green and his most frequent partners: 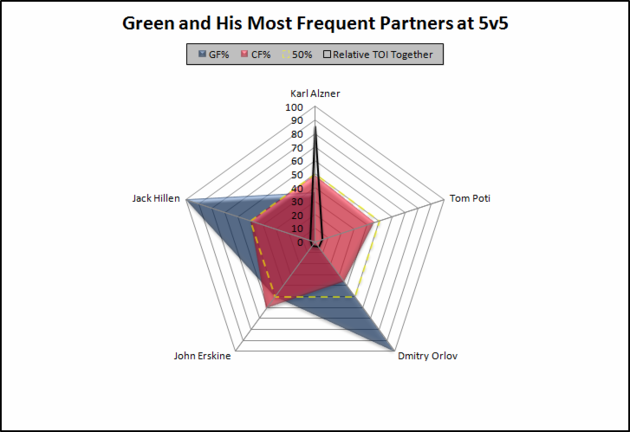 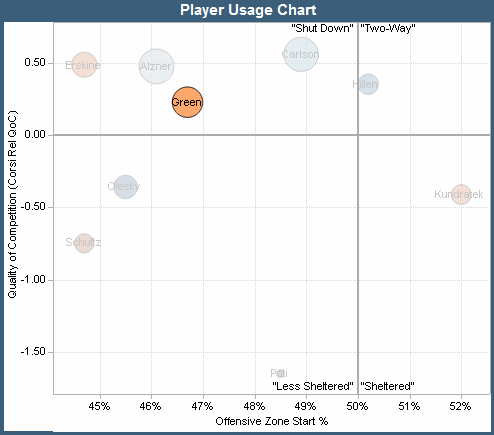 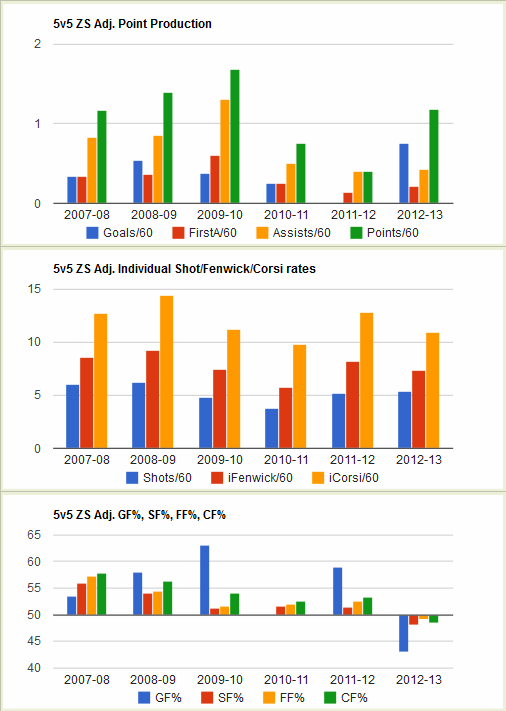 Key Stat: Green's 12 goals on the season led all defensemen in the NHL - the third time in his career he's topped all blueliners in that category, and the first since the 2009-10 season.

Interesting Stat: Almost a third of the goals for which Green was on the ice were scored by Green himself.

The Good: After several disappointing seasons, Mike Green spent most of the lockout-shortened 2013 campaign looking more like the Mike Green of 2009-10, putting up big points at both even strength and on the power play. The 12 goals he scored this year were one more than his total from the last two seasons combined, despite playing in half as many games, and his 26 points were still the fourth-highest point total of his career. They also made up almost a third of the entire points production by the Caps' blue line, which combined for 91 points this season.

Four of Green's 12 goals and 14 of his 26 points were produced on the power play, each of which was good enough for fifth-most among all NHL defensemen (as was his 4:02 of ice time with the extra man) - all while playing in anywhere from 7 to 13 fewer games than anyone above him in those categories. And yet he was actually more productive at even-strength this year, scoring two-thirds of his goals at even-strength, his highest production at five-on-five (relative to his total) of his career just a season after scoring all three of his goals on the power play. And while some may accuse certain people of growing fat on Southeast Division production, Green actually put up fewer points-per-game against division rivals, with 8 points in 14 games (0.57 pts/gm) compared to the 7 in 9 games vs. the Atlantic (0.78 pts/gm) and 11 in 12 games against the Northeast (0.92 pts/gm).

Green racked up a goals-per-60 at even strength of 0.72, his highest ever (including his 31-goal campaign back in 2008-09), but like the team as a whole he was able to reach that point in part thanks to a red-hot second half. Nine of his twelve goals on the year were scored after March 10, including a five-game goal streak from March 30 to April 4, and 15 of his 26 points were scored in April. He even had two-goal games twice in the last three weeks of the season, giving him fourteen multi-goal games in his career to move ahead of Kevin Hatcher for the second-most by a defenseman since 1987-88 (trailing only Sergei Gonchar).

While the numbers overall were good in the second half, a lot of them were also important for the team's playoff push. Seven of his nine goals in the second half were either game-tying or game-winning goals, including the goal in overtime to salvage the win against Tampa after the team blew a 6-1 lead and the power play goal in the third period against Boston in the final game of the season that set up Eric Fehr's overtime winner (a goal on which he assisted). That continued into the playoffs, as well, where he put up four points in seven games, including the overtime game-winner in Game 2 - the only goal scored in that game. His four points didn't just equal his point total from last year's postseason in half as many games, it also was tied for the team-lead.

He had a pretty decent year in his own end, as well, skating just over a minute a game shorthanded but on for just a single power play goal-against and was on for 28 goals total by his opponents - third-most on the team, but he skated at least a minute more a night on average than either John Carlson or Karl Alzner yet finished with roughly half as many goals-against as either one. Green was on the ice for 23 more goals-for than goals-against, the fifth-highest differential among all defensemen in the League... all while facing pretty tough competition over the course of the year.

The Bad: There's no question that Green is an offensively potent defenseman, and his ability to provide that offense was a big reason that the team even made the playoffs this year - but the fact is they needed him to be more consistent, particularly early on, and he wasn't as dangerous in the first half of the season. Granted, like his teammates he was adjusting to a new coach and system... but just seven points (including only two goals) through the first half of the season was reminiscent of his disappointing production of the previous two seasons.

Also reminiscent of the previous two seasons was the fact that Green once again couldn't stay healthy for a whole year, as he missed 13 games - over a quarter of the year - with assorted injuries and couldn't crack the 40-game mark for the second consecutive season. Obviously a quarter of a season is better than a half, especially when talking about a shorter campaign, but we've seen how important Green is to the team's overall success and the fact that he continues to be injury-prone is a little disconcerting.

And while his even strength production was vastly improved, he struggled in terms of possession, as his numbers were on the wrong side of 50% for the first time in the past six seasons (ditto his goals-for percentage... that bottom chart above is pretty striking). His GFON/60 wasn't all that great, either (granted, the teammates in front of him had ridiculous on-ice shooting percentages). Considering that even-strength production in particular was a big reason the Caps fell in the first round to New York, the fact that only two of his four points in the playoffs were at even strength (both in losses), this was an area in which they could have used more from him.

At the other end of the ice it wasn't all sunshine and daisies, either. While he didn't come close to the team leaders in goals-against, 28 goals-against is still a lot, particularly in just 35 games - in fact, his goals-against at even strength per 60 of 2.44 was his highest since the 2007-08 season and just barely edged out Alzner's mark this season (and was much higher than Carlson's) despite being on for half as many total goals overall. That's not really the efficiency we're looking for out of Green.

The Discussion: Over the summer Green signed a three-year contract extension - with his second-half performance, do you feel the $6+ million price tag is worth it to keep him around or do his numbers in the first half (and his injuries of the past two seasons) make you wary of that contract? Green played the bulk of his minutes with Karl Alzner for the first time, do you like that pairing or do you see him as being a better fit for a different defensive partner? What about Green's game makes him an ideal - or less-than-ideal - fit for Adam Oates's system? And finally, what would he need to do next year to earn a '10' from you?