Heading into free agency, the Caps have needs, but which is the most important to address?

With the opening of free agency just a couple of short weeks away, it's time to start hypothetically spending other people's money in an effort to make the 2013-14 Caps better than the 2013 version. As we've done before (and before that and before that), we're here to provide some guidance on the questions of the day while cooling off with a couple of cold ones.

Alright, Rob, let's say that Mike Ribeiro walks and the Caps enter free agency with two (seemingly) obvious roster holes: at second-line center (the spot Ribeiro would be vacating) and top-four defenseman (specifically a left-handed blueliner to play alongside with John Carlson or Mike Green, a need which Adam Oates has essentially acknowledged). If the Caps had the option of signing a guy to fill one or the other role this summer at the same cost, term, etc., which one should they go after?

Rob: Top-four defenseman, and I'll open my case by presenting... John Erskine. I probably don't need to go on, but will.

For a good chunk of the regular season and for most of the playoffs, Erskine was that fourth defenseman, getting big minutes at even-strength and on the penalty kill. He was also more lucky than good during the regular season, however, and that luck ran out in the playoffs where he was on the ice for a team-high seven even-strength goals-against, including the exclamation point that extinguished the faint comeback hopes fans might have harbored early in the third period of Game 7. There is, simply put, no way to overcome that type of play in what is not just a top-four role, but a spot in the top tough-minute pairing.

Whomever the fourth defenseman on the depth chart is ... he's going to play more and tougher minutes than the second-line center.

Look at the teams that are still playing - which one of those teams would even have Erskine in the lineup, much less in the top two defensive pairs and top penalty-killing unit? He lacks speed, he lacks puck skill, both of which are traits which we've been led to believe are paramount in Oates' system. Whomever the fourth defenseman on the depth chart is (behind Carlson, Green and Karl Alzner, and whether it's Erskine or someone else), he's going to play more and tougher minutes than the second-line center. I wouldn't go so far as to say that a 2C is a luxury, but I would say that a terrible 4D is a bigger vulnerability than a mediocre-to-bad 2C. If the Caps only have the opportunity to fill one of the two glaring needs, I say add the top-four defenseman.

JP: ... and you'd be wrong. Second-line center has been a problem for this team since before Adam Oates played for it, much less coached it. Don't believe me? This was the first season in which the Caps had a pair of centers who averaged one assist every two games over the course of a season since 1995-96 (Joé Juneau and Michal Pivonka, since you were wondering). The last time the team had two average 3/4 of an assist per game each was... well, never. That's a lot of offense (albeit a lot on the power-play... but those goals count, too, y'know) that disappears if the second center position goes unaddressed. Remember Mathieu Perreault's breakout 2011-12 season centering Alex Semin on the second line? He averaged less than a quarter of an assist per game.

Can some combination of Perreault, Brooks Laich, Martin Erat and Troy Brouwer form an adequate second-line? Maybe. Are you ready to test that theory in a new Division that boasts more than its fair share of the best centers in the game, especially since teams will likely have to play divisional opponents if/when they make the playoffs? I'd be more comfortable with a terrific third line and a second line capable of scoring and defending behind the top trio, rather than shoehorning guys into roles for which they're ill-equipped (been there, done that, got the Presidents' Trophy t-shirt... no, not really). Moreover, the answer to the 4D problem for 2013-14 could conceivably be in the organization already in Dmitry Orlov (who was quite good as a rookie in 2011-12); can you say the same about the second-line center?

But here's the reason going after a second-line center is more important: Nick Backstrom. Backstrom, of course, missed 40 games in 2011-12 with a concussion (and while he played a full slate of games in 2013, a hit he took late in his KHL mini-season left some lingering concerns about his health). Any player is "one hit away" from missing significant time, but we all know that a prior concussion history increases that risk. For this Caps team, it's critically important that they have a second-line center who can fill-in for stretches as a first-line center in the event that it's needed. Ribeiro was that. If he's not replaced, perhaps they should invest in bubble wrap for their top center and pray. 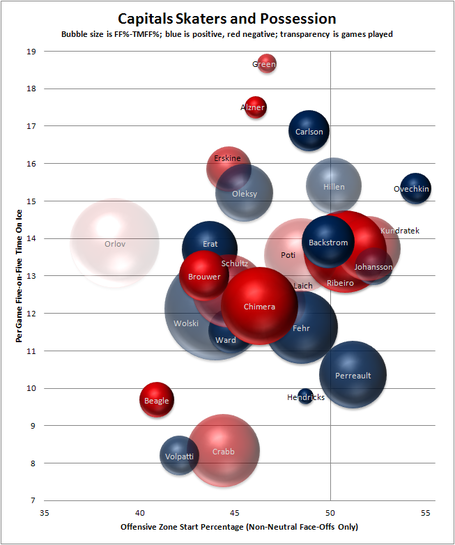 Rob: Yeah, 2C has been the Holy Grail that the organization has been chasing (or should have been chasing) for years now. But as important as a 2C is, there are ways to mitigate the lack of a great one. The Caps haven't had a great one since Alex Ovechkin joined the NHL. The closest they came was when Sergei Fedorov joined the team in 2008-2009. He wasn't an offensive difference maker at that point in his career, but he was defensively responsible.

In 2013, the Caps had their second-best 2C of the Ovechkin Era: Mike Ribeiro. He wasn't defensively responsible, and at even strength he is a guy that treads water (and has for his entire career). He's not a "great" 2C. His point totals look good, but he was doing most of his damage on a League-best power play. Obviously he deserves some credit for that power play success, but it doesn't seem unreasonable to think that with the fire power the Caps have, they would still be very dangerous with the extra man even without Ribeiro. So to answer your question as to whether or not his replacement might be in the organization already, considering the skill set, even strength production (in points and possession), and power play contributions, it's not laughable to think that the Caps might have that guy waiting in Mathieu Perreault. No, Perreault isn't going to scare the competition (especially when you start looking at the second-line centers that will be gracing the new Patrick Division, as you note), but neither is Ribeiro.

Sure, the 4D might be in the organization, just like the 2C might have been in the organization over the years. It hasn't worked out, and until Orlov (or another player) steps up and takes that spot, I'm not penciling them into the lineup. Orlov was healthy for the entire stretch run and didn't sniff the lineup, despite how obvious it was that the Caps needed an upgrade on John Carlson's defensive pair. Hoping for an internal replacement has been the approach the Caps have taken for almost the entire Ovechkin Era, and it has repeatedly resulted in unaddressed weaknesses on the roster.

On the Backstrom point, sure, if he goes down again, the Caps are in trouble. But how many teams can survive without their top center? It would be nice to have a 2C that could play 1C, but that's a luxury very few teams have. We got a look at the "2C as 1C" experiment when Ribeiro played with Ovechkin this year, and they weren't exactly lighting it up. If the Caps can find a 1C to come in and play 2C, nobody would complain. But which of those guys is available? What kind of money do those players command? They aren't going to find a replacement for Backstrom, and with enough depth in the lineup, they don't need to have that kind of player at 2C.

Quick question: who is centering the second line for the Presidents' Trophy and Western Conference champion Chicago Blackhawks? The ghost of Michal Handzus. I'm willing to bet you wouldn't be enthused if that's what the Caps picked up for 2C, but somehow the 'Hawks are making it work... yet every single defender on Chicago is significantly more mobile and better with the puck than John Erskine.

JP: How many teams can survive without their top center? The top two teams in the Eastern Conference, for starters, and many if not most of the League's elite squads (though I'll admit that "so good that they can survive without their 1C" is a pretty good start towards defining elite squads). Chicago's obviously a special case here in that they've been great without a real second-line center or elite goaltender (see, 2008-11 Caps, it's possible!), but they're unusually stacked elsewhere and have churned out solid NHLers at an unreal rate. I'll concede this argument in its entirety when you show me the Caps' Patrick Kane/Marian Hossa/Patrick Sharp-caliber second line winger(s).

(Also, the ghost of Michal Handzus had a nice goal last night in the Stanley Cup Finals. 'Sup?)

it doesn't matter how good Ovechkin is; without a credible, productive second-line, the team goes nowhere

Anyway, we've seen that it doesn't matter how good Ovechkin is; without a credible, productive second-line, the team goes nowhere. Of course, the same can be said with regards to a credible second pair on the blueline, but if the need persists during the regular season, that 4D is going to be easier to find on the trade market than a top cener. I'd be ready to take my chances addressing the second-line center hole and seeing if Orlov (or maybe some combination of Orlov, Hillen and Erskine) can make a go of it on the back end.

Rob: I'd put the "deadline deal" hope in the same category as the "internal replacement" hope: not something to bank on. Sure, the Caps have gotten lucky at a couple deadlines (Fedorov and Cristobal Huet, specifically), but the vast majority of the deadline pieces they've brought in have not worked out well enough to get the Caps where they need to be. That goes for the 2C and 4D acquisitions... unless you'd like to take another chance with Joe Corvo.

JP: Alright, no better note to end on than by bringing up Joe Corvo's name - it's like a Japers' Rink-specific version of Godwin's Law. We're both right, of course, that these are likely to once again be the Caps' biggest areas of need heading into free agency, and it's unlikely they'll be able to adequately address them internally and perhaps just as unlikely that they'll be able to patch the holes externally, given the cap situation (to say nothing of the free agent market). It's really too bad that Jeff Schultz, Marcus Johansson and Anton Gustafsson haven't/didn't turn into what the team thought they might when they drafted them. It's too bad Evgeny Kuznetsov is still in Russia.

But it's really too bad that my glass is empty. Let's grab another round - my thirst isn't going to be adequately addressed internally...