With the third pick in the 2008 NHL Entry Draft, the Atlanta Thrashers selected defenseman Zach Bogosian. Five years, 297 games (all regular-season), 34 goals, 69 assists and a minus-42 rating later, Bogosian has inked a seven-year, $36-million deal with the franchise that drafted him. That's a cap hit of $5,142,857 (give or take) for each of the next seven years.

With the 27th pick in that same draft, the Capitals took defenseman John Carlson. Five years, 271 games (which includes 37 in the post-season), 28 goals, 82 assists and a plus-31 rating later, Carlson is set to enter the second-year of a six-year, $23.8-million deal with the franchise that drafted him. That's a cap hit of $3,966,667 (give or take) for each of the next five years. 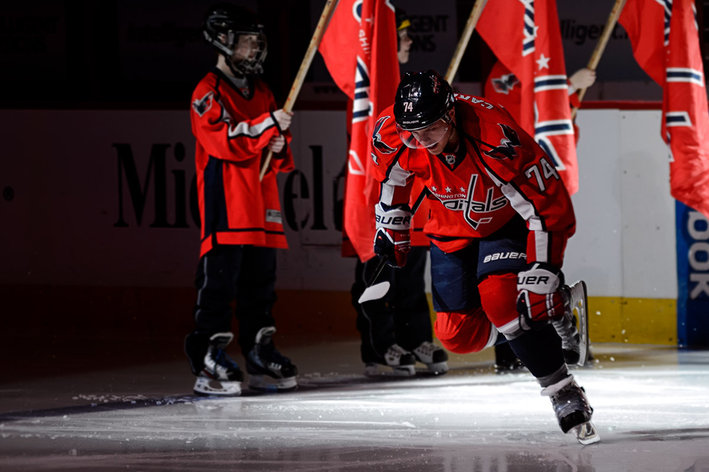 An in-depth look at the defenseman's season

Bogosian may well prove to be worth the deal he just signed, but the discrepancy between his new contract and Carlson's current one serves to underscore what a remarkable value Carlson is. (In fairness, Bogosian's deal bought out more unrestricted free agent years than Carlson's, so the comparison isn't exactly apples-to-apples.) Carlson is coming off a season in which he was probably the Caps' most-important defenseman. He was one of only 13 blueliners to average over 2:45 on the penalty kill and over two minutes on the power-play, played the toughest even-strength minutes, and managed decent possession numbers on a mediocre possession team, despite carrying John Erskine through much of the season (to wit, Carlson's Corsi percentage was 44.9% with Erskine, his most frequent partner, and 53.1% when skating without him). And here's one more data point: through his first four seasons in the League, Carlson has three more even-strength points in eight fewer games than Mike Green had (but one less appearance as a Norris Trophy finalist); one can only imagine the money Carlson would be making today if he got anywhere near the 4:03 of first-unit power play time per game that Green got through his first four years in the League, rather than the 1:44 of mostly second-unit time he got.

Carlson certainly looks to be a tremendous value going forward. But what does the market say? Via CapGeek, here are Carlson's 20-closest cap comparables (click to enlarge): 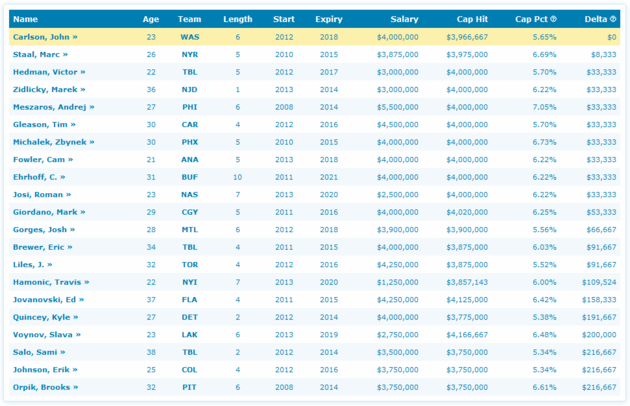 As has been the case throughout these exercises, each of these deals is different, and variables such as restricted versus unrestricted free agency, terms versus dollars and the years in which the respective deals were consummated make them difficult to fairly compare (indeed Carlson's contract was signed while he was still a free agent and covers his four remaining RFA years and a pair of would-be UFA campaigns). But that's a list of defensemen that will carry with them cap hits right around $4 million for 2013-14. How does Carlson stack up? Very favorably... as he should, since he's one of the few RFAs of the group (and thus didn't have the leverage or the ability to test the open market like many of the players on the list). How many of those players and contracts would you swap straight-up for Carlson and his right now?

Carlson has outplayed higher picks like Cam Fowler (as well as fellow U.S. Olympic hopefuls Brooks Orpik, Tim Gleason, Erik Johnson and Bogosian in recent years), and while reasonable minds could probably argue in favor of Travis Hamonic, Victor Hedman or a healthy Marc Staal (and possibly Roman Josi or Slava Voynov), Carlson is right there in the discussion with any of them (even with the ups and downs he's played through thus far in his career). 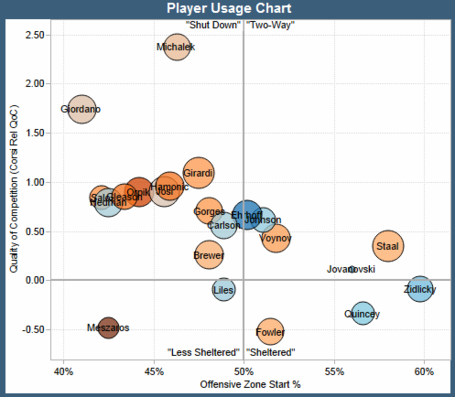 There's Carlson... one of the few blue dots to the left of 50% zone starts and well north of zero in terms of Quality of Competition. That's good.

The recurring theme through this series of "Cap Comparables" has been that the Caps need players to out-perform their contracts, to provide significant above-and-beyond value, if they're going to be successful. Carlson is one of the players who should be able to do that, and the beautiful part is that he should be able to do it for years to come. And if the team can upgrade his defensive partner, there's every chance that Carlson's current contract can be one of the best values in the League.