When people lament the "death of the bridge contract," they're talking about deals like Nicklas Backstrom's: second contracts that take a player from his entry-level deal to unrestricted free agency, spanning those high-leverage (for the team) years of restricted free agency and foregoing, in some cases, a lot of the burden of proof on the player to show that he's actually worth the investment. Bridge contracts may be making a comeback under the new CBA, but Backstrom's is - wait for it - water under the bridge at this point.

Backstrom signed a 10-year/$67-million deal in May of 2010, in the wake of a 33-goal/101-point third season in the League, the exclamation point on which was his hat-trick-completing overtime goal in Game 2 of the Caps' first-round match-up with Montreal. Backstrom was well on his way to joining the League's elite pivots - his goal totals had gone from 14 to 22 to 33, his point totals from 69 to 88 to 101, his possession numbers were fantastic and he hadn't yet missed a game. He had, in short, demonstrated everything a team would want a player to show before committing to him long-term... unless they preferred a bigger sample on which to base that decision 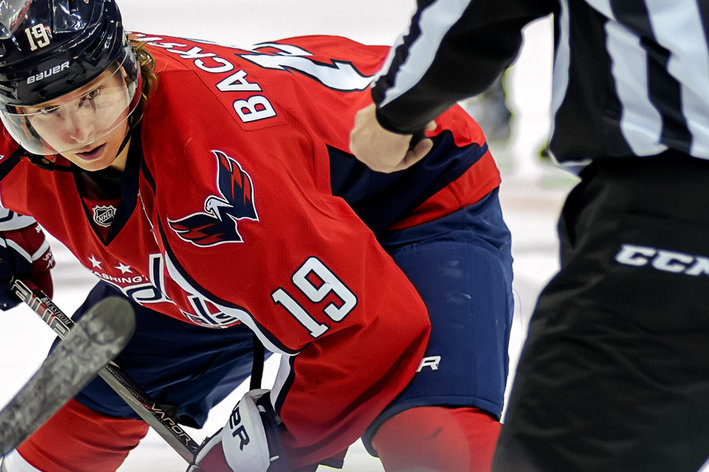 An in-depth look at the center's season

So the Caps went all-in on Backstrom, locking him up for a decade of feeding (and, at times, being the defensive conscience for) Alex Ovechkin, and doing so with an honest deal (as opposed to some of the crafty back-diving, cap-circumventing pacts that were being handed out at the time). Like most of the rest of the team, Backstrom's numbers took a step back in 2010-11, but unlike most of the rest of the team, Backstrom's stats were rebounding nicely in 2011-12 before Rene Bourque's filthy elbow to the head cost the Swedish pivot half a season. Fully recovered, Backstrom finished third in the League in assists this past season, despite spending a significant amount of time centering the second line, and actually had the same per-game assist rate as he did back in 2009-10. Perhaps most importantly, Backstrom played all 48 games (and this after playing 19 in the KHL during the lockout).

Backstrom's play since signing his extension would seem to justify the team's investment in him so far. But what does the market say? Via CapGeek, here are Backstrom's 20-closest cap comparables (well, 19 and one dude who's retired; click to enlarge): 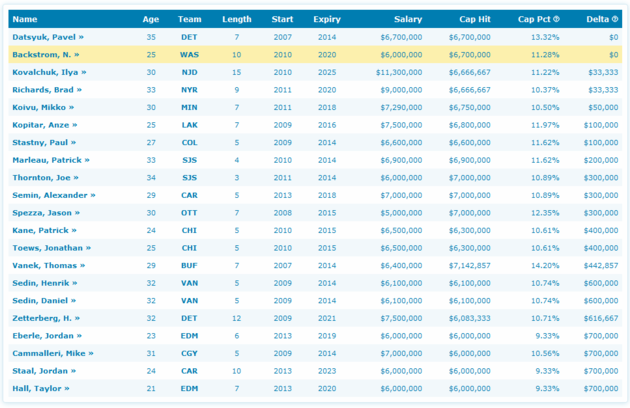 As has been the case throughout these exercises, each of these deals is different, and variables such as restricted versus unrestricted free agency, terms versus dollars and the years in which the respective deals were consummated make them difficult to fairly compare. But that's a list of forwards that will carry with them cap hits right around $6.7 million for 2013-14 (err, and Ilya Kovalchuk). How does Backstrom stack up? It's an awfully impressive group (as it should be in that price range), but Backstrom certainly holds his own, and it's worth noting just how many of those players - eight in all - are entering the last year of their current deals, and will surely earn more on their next contracts (Pavel Datsyuk is already inked for a $7.5-million average annual value). 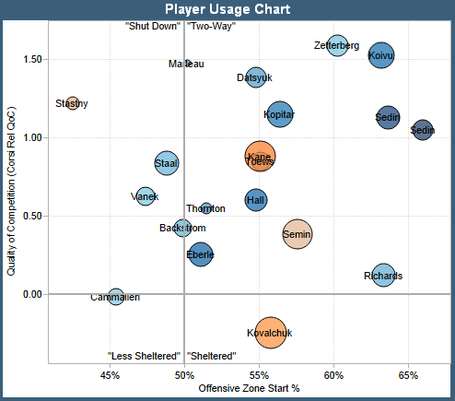 One point that might jump out as you scan the names on these charts is that seven of the players on the list, including the two from Backstrom's 2006 Draft class (Jonathan Toews and Jordan Staal) have already won the Cup at least once. That's not all on Backstrom, of course, but as you go up the NHL's economic ladder for individuals, it's reasonable to expect more results, especially in the playoffs. To that end, Backstrom has struggled mightily to produce in the postseason, almost dating back to that hat trick mentioned above - in his past 32 games (which begins with Game 5 of the Montreal series), Backstrom has just three goals and 13 assists. There are mitigating factors such as injuries, usage and the shortcomings of his teammates, but those raw numbers (like those of some of his teammates) simply aren't good enough.

Tying together a couple of loose ends from above, let's circle back to Backstrom's '06 classmates and see how each of the three got to where they are today, contractually. We've detailed Backstrom's path - terrific performance on his entry-level contract (ELC) and straight to a big-money, long-term deal. Toews, on the other hand followed his ELC with a five-year deal with a cap hit of "just" $6.3-million per year. That's hardly a small bridge, but it saved the 'Hawks a few bucks and they won a Cup without much cap space to spare during the deal, so it's tough to argue against their course of action... though what kind of contract will Toews command as a potential unrestricted free agent following the 2014-15 season?

Staal had something closer to a true bridge contract when he inked a four-year, $16-million deal following his ELC, and was traded after three years before the Hurricanes signed him to a ten-year, $60-million extension. Staal isn't nearly the offensive force that Toews or Backstrom are, so he's not going to get paid quite as much (despite his other strong qualities), but he certainly is being handsomely remunerated.

In sum, two years from now, Backstrom will have a $6.7-million cap hit on a deal based on three years of performance, Staal will have a $6-million hit based on six years, and Toews will make... a lot more than either of them based on his seven or eight years in the League. The Caps could have saved a few bucks on Backstrom with a shorter deal than the one he's on now, but there's no way to know if the difference that would have made over the life of the deal would be worth the increased cost of his next one. More importantly, Backstrom - a legitimate top-line pivot who makes those around him better - is worth what he's paid. While he may not out-perform his current deal, it's a safe bet he'll live up to it for years to come if he can stay healthy. And if Adam Oates can help his game along, Backstrom's contract could end up being a steal, while some of his contemporaries hit their free agency jackpots.