From Alzner to Ward, we're taking a look at and grading the 2013 season for every player who laced 'em up for the Caps for a significant number of games during the campaign, with an eye towards 2013-14. Next up, Nicklas Backstrom. 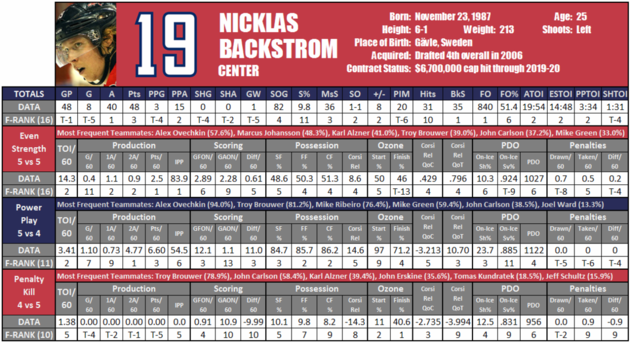 Backstrom and his most frequent linemates: 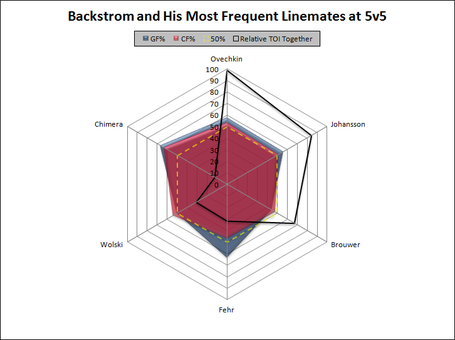 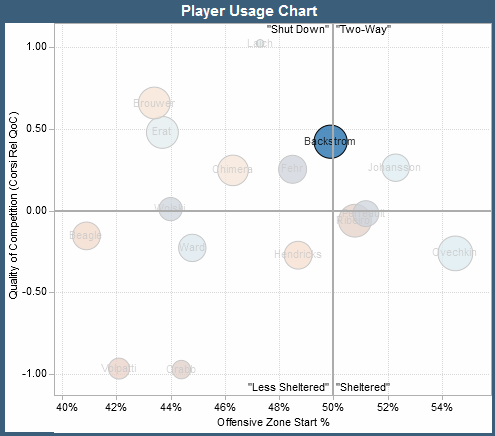 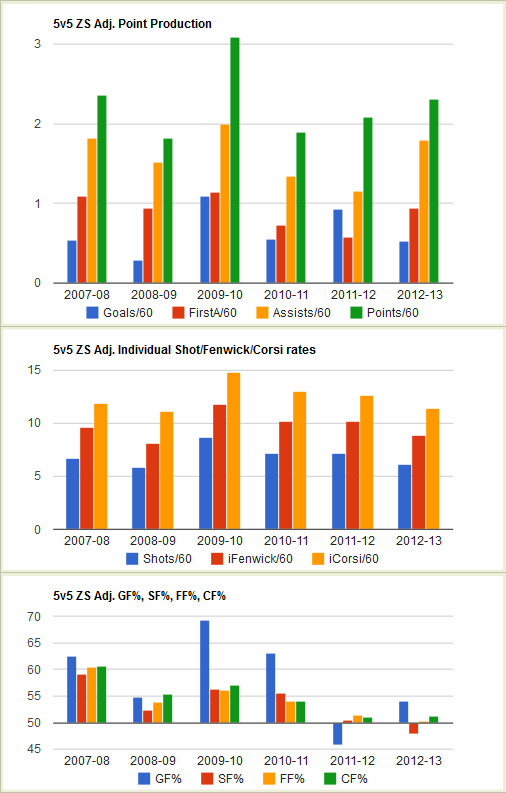 Key Stat: Backstrom had at least a point in 31 of the 48 games this season; of those 31 games, only seven times did he pick up a point when Alex Ovechkin did not (four of which came in the first half of the year).

Interesting Stat: Backstrom's four-assist night on April 2 against Carolina marked the seventh time in his career that he had four assists in one game (and the first time since November 2010). Only Ryan Getzlaf and Sidney Crosby have even come close to matching that feat since Backstrom's rookie campaign in 2007-08, with Getzlaf picking up at least four assists five times and Crosby doing so four times over that same span.

The Good: Looking at Backstrom's 2013, a few things stand out. He led the team in points and Individual Points Percentage at five-on-five, despite a mix of linemates (more on that in a moment), and once again led the team in assists, and he was one of two Caps forwards (Troy Brouwer being the other) who skated more than a minute-and-a-half per game on each special teams unit (and racked up many of his forward-leading blocked shot total while on the kill).

Drilling down a bit, the story of Backstrom's season becomes clearer. On March 12, Nicklas Backstrom started the game the way he had started most of the previous 24 - on the second line, having ceded his spot alongside usual running-mate Alex Ovechkin to Mike Ribeiro. Down by 2 in the second period, however, rookie coach Adam Oates made the pivotal decision to reunite his two young stars for the rest of the game. The Caps went on to lose 4-0 to Carolina, but the reunion stuck, and that game at almost exactly the halfway mark of the season would prove to be something of a turning point for the Caps.

It's pretty safe to say that a big reason for the team's resurgence - and for the resurgence of their captain - after that game and down the stretch was the decision to bring 8 and 19 back together, as the two of them helped drive the team to yet another Southeast Division title. From mid-March on there were few in the League as hot as Backstrom, who put up 27 points (and 6 of his 8 goals) in the campaign's final 24 games, including a nine-game, fourteen-point streak from the end of March to mid-April. And somewhere along the way he appeared in his 400th career game, picked up his 300th career assist and his 400th career point.

Seems like just yesterday he was that baby-faced pivot drafted by Alex Ovechkin, doesn't it? Sunrise, sunset...

The Bad: For the team, the 2013 season can really be broken down into two distinct seasons; for Backstrom it's more like three, as he started slow, heated up as the regular season ended then went ice cold in the playoffs.

There's a lot of "chicken or the egg" about the year for Backstrom, as well - it's hard to pin down exactly what aspects of his game (both good and bad) can be tied to the performance of the team in general or his linemates specifically. Did the team start slow because he did or was the team's slow start the reason for his slow start? Were his overall numbers down early on because his linemates weren't as good as usual or were his linemates unable to produce because Backstrom wasn't helping them to do so?

Whatever the reason, the first half of the year was one to forget for the Swedish center. Never exactly a sniper in a good year, the three goals Backstrom managed to score through 24 games was low even for him (although he did put up points throughout, with 18 helpers along the way). And while some of the underlying numbers - particularly defensively - showed that he wasn't quite as bad as he looked, it wasn't the Backstrom we were used to seeing. On top of all of that, there was still some concern that perhaps the injury suffered in the final weeks of his KHL tour of duty was having some lingering effects.

The cure for all of that, of course, seemed to be (among other things) returning to his spot alongside Alex Ovechkin, as the two of them wreaked havoc on the League down the stretch... that is until the playoffs and the New York Rangers came a-calling. While the top line started the first-round series strong, and while Backstrom did finish the seven-game run with the second-highest point total (3) on the team, the offensive force he'd been in the second half of the season was neutralized by both the Rangers and his own sudden inability to finish... and three points (one goal) in seven games is nothing to write home about. And when you've got $16 million and change on your top line and the trio can't notch a single even-strength point over the last four games of a series, something's not working.

The Discussion: After two shortened seasons and some injury troubles of late, are you concerned about Backstrom's ability to produce the way he has in the past or do you chalk this up to a run of bad luck? Would you keep Backstrom with Ovechkin next year because of the chemistry or would the fact that the top line was shut down in the playoffs make you consider splitting them up again? How much does the decision to re-sign (or not re-sign) Mike Ribeiro this summer play into that? Provided he stays healthy and plays close to a full season next year, what kind of numbers do you see Backstrom putting up? And finally, what would it take for him to earn a '10' from you next season?