Troy Brouwer had a breakout 2013 season, setting career highs in goals-, assists-, points- and shots-per game, coming within three goals and five assists of career bests set over the course of full seasons, and notching as many points in 47 games as he had a year earlier in 82 games in his first season in D.C. 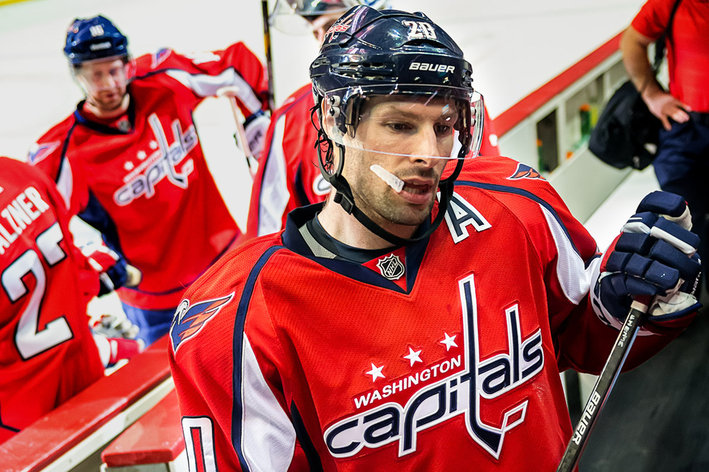 An in-depth look at the winger's season

Brouwer certainly made the most of his time as the trigger man in the slot on the League's best power-play, scoring seven of his 19 goals and adding nine helpers on the extra-man unit, and his even-strength production was aided by playing on the right of either Nicklas Backstrom or Mike Ribeiro on most of his shifts (indeed one of those two pivots managed a point on 12 of Brouwer's 16 even-strength points). But playing alongside elite talent is nothing new for Brouwer, whose top-five most-frequent five-on-five linemates since coming into the League are Patrick Kane, Jonathan Toews, Patrick Sharp, Backstrom and Alex Ovechkin. Not bad.

When the puck drops on the 2013-14 season, the 28-year-old (by then) Brouwer will be playing in the first year of a new three-year deal that will pay him an average of $3.67 million per season. With the Caps in a bit of a salary cap crunch, the question is whether or not he's worth that much. Those 19 goals say he is - only 15 players scored more last year. But his underlying numbers are underwhelming, and he's certainly not making the players around him better (a notion further evidenced by a woeful career Individual Points Percentage, which informs such things). He's a passenger in a positive sense of the word, a poor man's Mike Knuble-in-his-prime.

So what does the market say? Via CapGeek, here are his 20-closest cap comparables (click to enlarge): 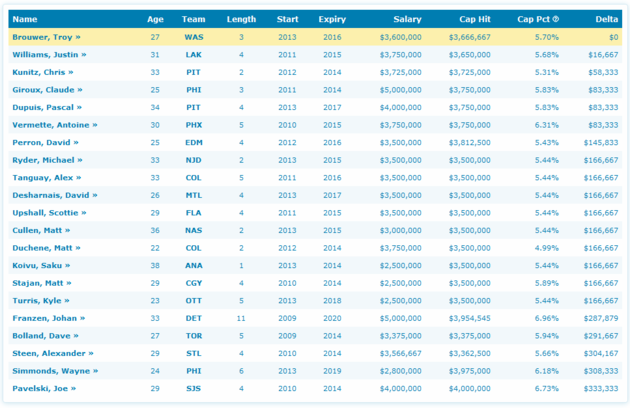 That's a big list of apples, oranges... and a lemon or two. Some of those players (like Claude Giroux and David Desharnais) signed their current deals as restricted free agents. Some gave up dollars for term, while others gave up term for dollars. The years in which the deals were signed and when they expire matter as well. But that's a list of forwards that will carry with them cap hits of between $3.5 and $4 million in 2013. How does Brouwer stack up? Two (Sidney Crosby's most frequent linemates) scored more goals than Brouwer, and five had more points. Of course, not one of the 20 had the good fortune of playing on the Caps' power-play, and Brouwer's even-strength production was... well, of the 318 forwards who played at least 20 games and averaged 10 minutes or more of five-on-five ice time, Brouwer ranked 222nd in points-per-sixty minutes. For perspective, remember that horrific season Jason Chimera just suffered through? He put up points at a higher rate at five-aside than Brouwer did (but Brouwer did finish ahead of Martin Erat, which may be the least-comforting thing you read all day). Granted, Brouwer's on-ice shooting percentage in those situations was a team low among non-fourth-liners, but his possession numbers weren't good either. Throw in his usage alongside his cap-hit comparables and it looks like this (via Hockey Abstract): 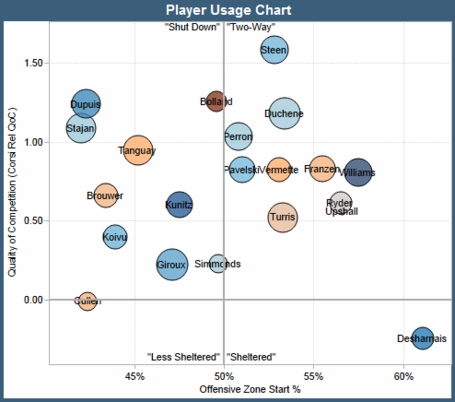 Blue is better. Brouwer is not blue.

All of this isn't to say that Brouwer's contract is terrible, but rather that it's somewhat unlikely that he'll outperform it and provide great value on it unless the salary cap sky rockets over the next three years (and he doesn't get passed on the depth chart along the way). Sixteen of Brouwer's 33 points in 2013 came on the power-play, where he literally had the highest on-ice shooting percentage in the League, and he was just about the Caps' worst top-nine forward at five-aside, both in terms of goal-differential and possession (though he wasn't the beneficiary of a high PDO like so many of his teammates). Lest we lose the forest for the trees... he did score 19 goals last year (though his 17.1% shooting percentage is almost certainly unsustainably high), the highest per-game rate by someone not name Alex in years. Brouwer also theoretically provides a bit of physicality and leadership and does kill penalties, so there's value there as well.

But all in all, is it more than twice the value that Eric Fehr (at $1.5 million) could provide? Or nearly three times what Tom Wilson could (at $1.3 million)? Or any number of cheaper options still looking for work? The Caps had better hope so, because they've made a sizable wager on it and they're going to need some key contributors to turn in big seasons if they're going to contend for anything significant.