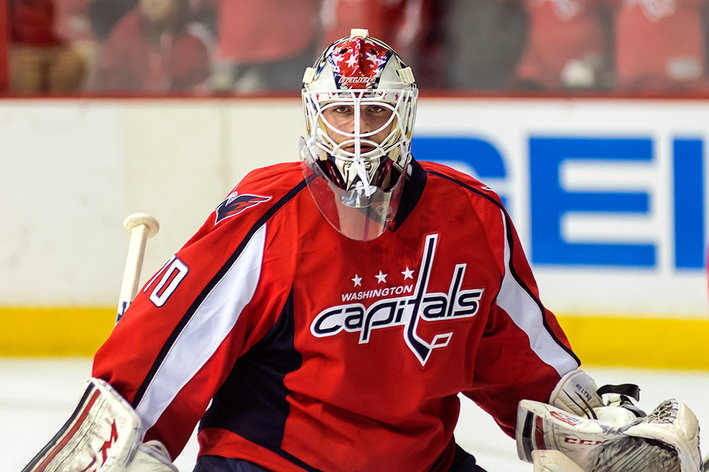 An in-depth look at the netminder's season

Over the past three seasons, Braden Holtby has played 57 regular season games for Caps teams of varying quality, and has posted some pretty sparkling numbers - a 37-16-4 record, a 2.39 goals against average and a .923 save percentage, which includes a .930 save percentage at five-on-five (a metric which is generally accepted as the best available measure of a goalie's true performance and a number which places him seventh in the League over that three-year span). He's also knocked off the defending Cup champions in a playoff series and played in a pair of other Game 7's against the Rangers that didn't go the Caps' way (one in which he was good and... well, another one), compiling more strong numbers, in aggregate, along the way. And he's done it all on a contract with a lower average annual value than Tyler Sloan has had over the same three years.

Two summers ago, Michal Neuvirth looked as if he was poised to be the Caps' top 'tender. He was coming off a season in which he carried a starter's workload and went 27-12-4/2.45/.914, and was terrific in a first-round win over the Rangers before he and his team were run over by the Bolts. Semyon Varlamov (who had probably outplayed Neuvirth in their Caps careers to date) had been traded to Colorado, and Neuvirth's only competition for the starter's role looked to be Holtby, who, despite an impressive 14-game NHL debut during the previous season, was still quite inexperienced. Then Tomas Vokoun fell into the Caps' lap and Neuvirth suffered through a season of inconsistent play and injuries; when Vokoun went down with an injury in early April, Neuvirth again seemed poised to take over the top spot as the Caps headed into the playoffs... until an injury in the team's penultimate regular season game again took him out of the running.

Enter Holtby, who has barely yielded the reins since, as Neuvirth had a similar 2013 - despite facing his "weakest competition" to date, inconsistency and injuries (as well as Holtby's play) have seemingly relegated Neuvirth to a backup role, though with a cap hit at a hair over $1-million, these developments weren't nearly as impactful on the budget as they were on the ice. 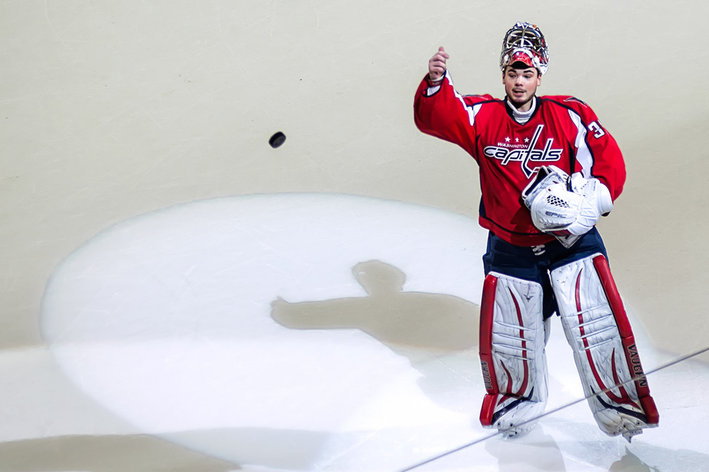 An in-depth look at the netminder's season

In February of this year, the Caps signed Holtby to a two-year, $3.7 million extension ($1,850,000 per season), and then in April, they re-upped with Neuvirth for two years at $2.5 million per season. The result is that the Caps have the two under contract for the next two seasons at a total cap hit of $4,350,000 per season... which is less than 16 teams will pay just one of their goalies this coming year. Six teams appear poised to spend less in net than the Caps, but aside from perhaps Ottawa, none of them has a duo that's likely to be better than Holtby and Neuvirth.

But what does the market say about the two Caps goalies, individually? Via CapGeek, here are Holtby's and Neuvirth's 20-closest cap comparables (click to enlarge): 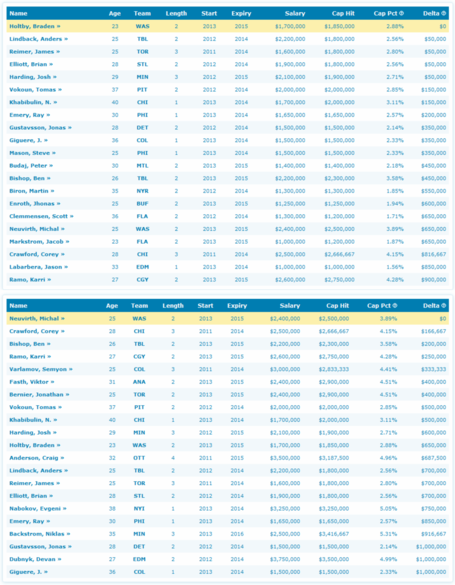 By now you're pretty familiar with our typical disclaimer - each of these deals is different, and variables such as restricted versus unrestricted free agency, terms versus dollars and the years in which the respective deals were consummated make them difficult to fairly compare... which is a critical point to recognize before comparing the Caps goalies to the rest of the League, because it's equally important to note when comparing them to one another. Neuvirth isn't going to make 35% more than Holtby over the next two years simply because he's more experienced; he's going to make 35% more than Holtby because he had more leverage given his contract status and being closer to unrestricted free agency (which, unlike Holtby, he'll have at the end of this two-year deal).

Anyway, that's a list of goalies spanning from the 21st-highest 2013-14 cap hit (Devan Dubnyk) to the 48th (Jason LaBarbera). How do Holtby and Neuvirth stack up? It's a real mixed bag of career backups, a few young studs, some decently-priced veterans and others, but for how many (contracts included) would you trade Holtby? And Neuvirth? To the former, there may be a couple. To the latter... it's a longer list.

To go a bit further, here's a chart with a few 2013 stats plotted for each of the netminders mentioned, with the Caps' pair highlighted (stats via Hockey Analysis and Hockey Abstract): 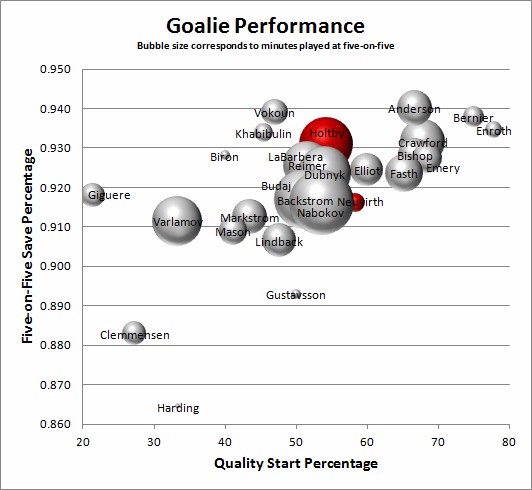 What you see here is five-on-five save percentage (Y-axis), five-on-five time on ice (bubble size), and Quality Start Percentage (X-axis). For more on Quality Starts (QS), check out EOTP's excellent summary (and spend some time with their entire summer series of advanced stats posts while you're there). Basically the three tell you how the goalie performed, how much he played and how often he gave his team a chance to win, respectively. 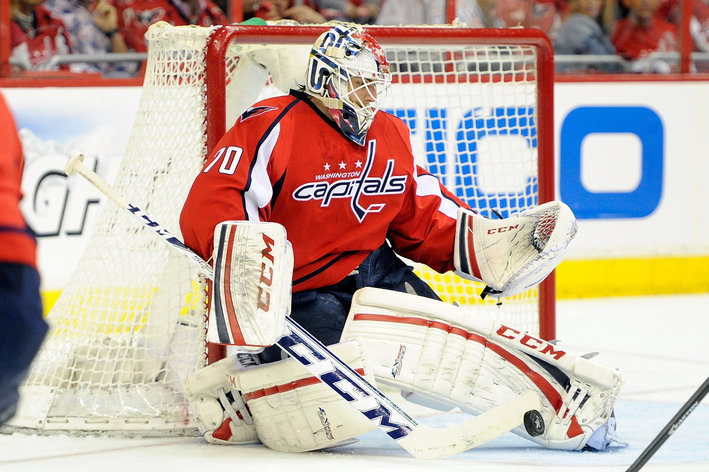 Breaking down the division's top 10 in net

One interesting thing from the chart is that Neuvirth's QS% was actually higher than Holtby's, despite a significantly lower save percentage, which speaks (insofar as a sample of this size can) to Holtby's inconsistency, but also "higher highs," which certainly fits the narrative on the two. Regardless, you'd like to see both goalies bump that QS% up a bit. Further to that point, in the playoff series against the Rangers, Holtby had a Quality Start in each of the Caps' wins and didn't in three of the four losses (the exception being Game 6; it's also worth noting that the QS parameters probably should be adjusted for the playoffs, but the underlying point remains).

Holtby and Neuvirth are at different, but similarly important, points in their respective careers. Holtby needs to show that his small sample success can continue over a full season of NHL games (the career-high 35 starts he had last year is more the workload of a well-used back-up than a starter), and Neuvirth needs to show that he's capable of being a starter... and he'll likely have to start by proving he's capable of being a reliable back-up.

When we did this exercise looking at John Carlson a couple of weeks ago, we noted that "[t]he recurring theme through this series of 'Cap Comparables' has been that the Caps need players to out-perform their contracts, to provide significant above-and-beyond value, if they're going to be successful," and both Holtby and Neuvirth have the potential to do just that. In fact, they both already have at times during their respective young careers. If they both can do so again, the Caps should be in good shape going forward.