The Washington Capitals will see a lot of competition for ice time among the top-nine forwards. Should Marcus Johansson be worried?

After an offseason during which the Washington Capitals saw more turnover than the team has seen in over 15 years - changes to the front office, coaching staff, and roster - Caps fans are left with more questions than answers. Until the Caps finally take the ice, we're left reading between the lines, looking at past history, and attempting to divine what the on-ice product might look like.

One of the outstanding questions, which has seemingly persisted for three years now, is what to make of Marcus Johansson. In reading between the lines, there's reason to believe Johansson is going to get a chance to compete for the currently vacant second- or third-line center position. There's also just as much reason to believe Johansson could end up the odd man out. One line in particular stood out from Barry Trotz' conversation with Mike Vogel:

"Sometimes we look at the big picture, the score and the systems and all that. But the pure spirit of the game is the battle and the one-on-one confrontation. And if you don’t have that spirit to be part of that one-on-one confrontation, you’re never going to win. There is a lot of honor in commitment and desperation; the compete level that it takes to do something."

Looking back at last season with an eye towards 2013-14

If there's one player on the Caps that would seem to be implicated by that statement, it's Marcus Johansson. Even his biggest fans wouldn't have "battle" as one of his top ten descriptors. He's not big, strong, or feisty. His game is built on speed and finesse, and fans have had plenty to say about his lack of physicality since he first joined the NHL just days after his twentieth birthday. Johansson may be the player with the most to prove to the new coaching staff (at least based on the above quote)... but that's not to say that he should be written off or shipped out of town merely to ease the pressure in the lineup among the forward ranks.

For starters, Johansson has produced very well for his age and draft class. Four of the five guys with more points than him from the draft class of 2009 were the first four players taken overall. Only one guy picked after him has more points (Ryan O'Reilly), and all of the players ahead of him have at least 60 more NHL games played than he does. Looking at his (brief) career trajectory, Johansson stacks up pretty well (per mainstream sports media policy, we'll limit our comparison to players of the same nationality): 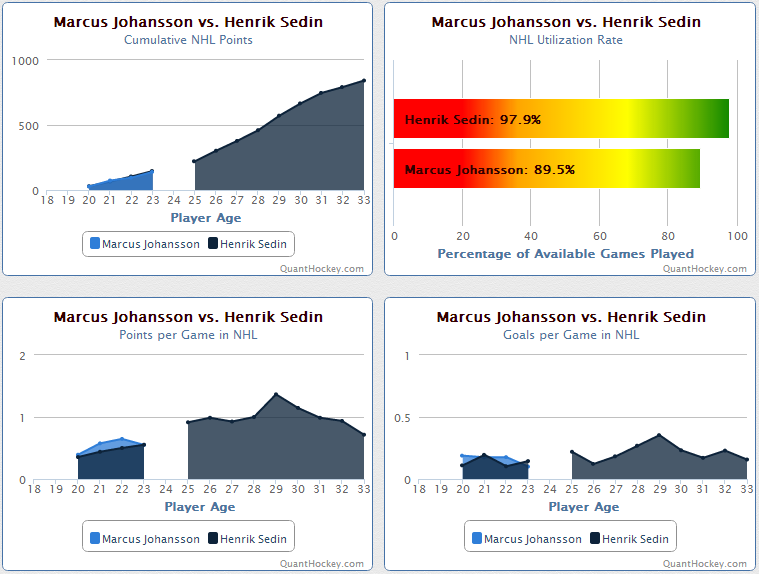 Henrik Sedin is generally recognized to be a pretty good player. He and his brother have much higher pedigree than Johansson, but they started their NHL careers on a more modest scoring pace than they've been able to achieve through their prime years. In a smaller percentage of his team's games, Johansson has been able to produce points at a slightly higher rate than Sedin managed at the same age. Henrik is not a prolific goal scorer, but Johansson has scored at about the same rate as Henrik did early in his career - you rarely hear much about Henrik's failure to score goals, though, as people generally understand he's the setup man for his brother.

That being said, trying to sell Johansson as the next Henrik Sedin doesn't pass the smell test. It does put Johansson's early production into a bit of context, but not even Johansson's agent believes he's going to win an Art Ross or Hart trophy down the line (though when it's time to negotiate his client's next contract, who knows what might be said). So, it would be nice if we could compare Johansson to another player with a similar skill set and style (i.e. smooth skating, pass-first, not-so-physical). It would be an added bonus if we could find such a player from Barry Trotz' past as it might give us an indication as to how the current coach might use Johansson.

And it just so happens that there is one player that fits the criteria (though we'll have to leave Sweden to find him): Martin Erat. 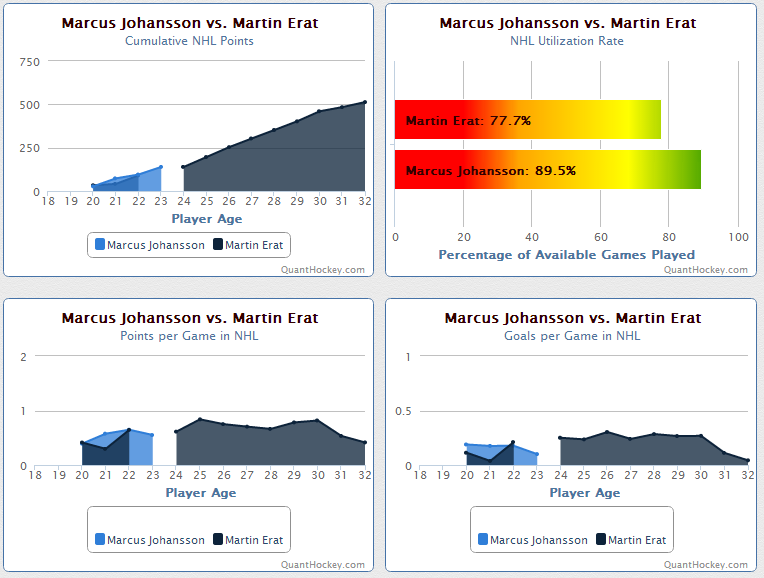 Once again, Johansson compares favorably to another solid top-six NHL player. Johansson produced more points and scored more goals than Erat did at the same age. Johansson's goals per game took a hit last season, but unless you think his shooting percentage (7.5% overall, 1.85% at even strength), which was over five percentage points lower than his second-lowest shooting percentage (12.7% his rookie year), is unlikely to rebound, then you should expect his goal total to improve a little bit. He obviously needs to shoot the puck more, but his critics have conveniently ignored his pretty terrible puck luck last season. He doesn't have a great shot, but he shoots from an area where players generally convert at a higher rate than 7.5%. As we've noted before, for all the flak he takes for not being a tough player, when he does shoot it's generally from right around the crease. 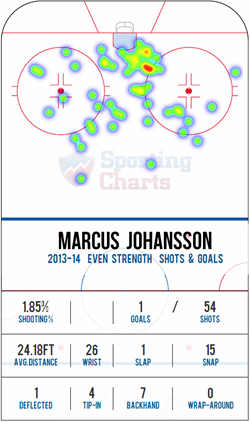 Johansson is a bit strange in that his on-ice play never seems to look as good as his production numbers, and his production never seems to live up to his skill set. Part of the issue is the reality that he's been given a lot of time with Alex Ovechkin and Nicklas Backstrom (they are the two forwards with whom he has played the most - Ovechkin has been alongside Johansson for 36% of the latter's career five-on-five minutes, Backstrom for 29%). Fans rightly expect someone playing on that line to produce. For the most part, Johansson has, but the question remains, how much of that production is Johansson and how much of that is driven by his linemates? The conventional wisdom would say that Johansson is a product of Ovechkin and Backstrom, but it's not quite as simple as that.

Johansson's statistical impact on Ovechkin and Backstrom is unclear, much like his proper position on the roster, and even using the eye test to judge him doesn't clarify the issue. When Johansson's at his best, he uses his speed to carry the puck through neutral ice, put defenders on their heels, and gain entry to the offensive zone with possession. Even before Johansson joined the team, we identified this as an important way to maximize Ovi's effectiveness. Moreover, there is an increasing amount of evidence suggesting the importance of gaining the zone with possession, and we also know that this is something Barry Trotz and his staff sought to emphasize over the last two years in Nashville.

Johansson would therefore seem to be an ideal fit alongside Ovechkin and Backstrom at even strength, but it doesn't always work as well in practice as it does in theory. His lack of physical strength allows opponents to muscle him off the puck, and he's often unwilling or unable to retrieve it, particularly along the boards, which is a key role for a winger. This could be reducing the positive impact of his zone-entry abilities while also increasing the wear-and-tear on Ovi and Backstrom, who must do the dirty work in the corners that was previously performed by Mike Knuble during the team's heyday. Given coach Trotz' emphasis on winning one-on-one battles, Johansson will likely have to improve this aspect of his game if he wants to keep receiving top-six minutes.

Beyond improving his physical play and compete level, there are two things that Johansson needs to do to take his game forward.

The first is simple: shoot the puck. He's never going to be a shoot-first guy, or have more goals than assists. That's fine. He does need to make goalies and defenders respect him when he has the puck, though, or else teams will play the pass and take away the shooter on his line. If he'll pull the trigger more often, he'll be more difficult to defend. He currently averages about 1.3 shots per game, and that needs to increase. We'd like to see Johansson somewhere in the 2-2.5 shots per game range. That's not a huge increase, but it's enough to keep teams more honest when he has the puck in the offensive zone.

Go Check This One Out

Complaints about Marcus Johansson have been frequent and varied. He's soft. He can't win puck battles. He won't shoot. He won't go to the tough areas. One night last November, he put all the haters on notice...

Go Check This One Out

Johansson also needs to show that he can continue to produce in a secondary role without Ovechkin or Backstrom. Just as Ovechkin and Backstrom saw a decrease in their Goals-For rate without Johansson, Johansson saw a decrease in his rate without Ovechkin and Backstrom. It seems like basically anyone should be able to ride shotgun with elite talent and contribute, so even if Johansson is helping Ovechkin and Backstrom offensively, he'll need to show that he can keep it up without them. This is especially important since the Caps have lacked reliable scoring from the second line for virtually all of Ovechkin's career. If Johansson could produce consistently away from Backstrom and Ovechkin, it would give the coaching staff much greater flexibility in filling out the lineup.

The Caps' lack of a second line center has been well-documented, and when GM Brian MacLellan chose to pursue two free agent defenders, the signal was sent that the team was going to let an in-house candidate try to fill that role. Whether it's Evgeny Kuznetsov or Johansson, it's almost a certainty that the Caps will need to have secondary scoring by committee. Johansson is going to be a part of that committee - so now it's time for him to show that he can step up and produce without the team's franchise players. It would be great if he could make the transition to play center full time, on either the second or third line, but he can still be a valuable part of the team if he can create offense as a second line wing.

Johansson's had a very good start to his career, but he's still developing and he'll need to get better and round out his game if he's going to have a future with the team (especially with the likes of Andre Burakovsky, Riley Barber, and Jakub Vrana on the horizon). He's in a contract year, so he'll need to convince the team that he's part of the future - otherwise, he could find himself an expendable asset on the outbound half of a transaction as the team tries to address other needs. Improving his ability to win one-one-one battles, shooting the puck, and creating offense away from the top line would be a great start.