Capitals Wings and Getting to the Net

Share All sharing options for: Capitals Wings and Getting to the Net

Below (via Sporting Charts' Ice Track tool) are heat maps of the even-strength shot attempts for the wings on the Caps' top three lines through Thursday. Your task: match the wings (Troy Brouwer, Jason Chimera, Eric Fehr, Marcus Johansson, Alex Ovechkin and Joel Ward) to their heat map. 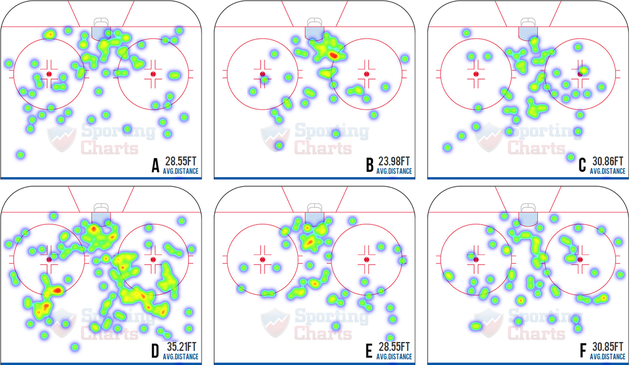 Alright, because of the shot volume, Ovechkin is a gimme. He's also got the highest average shot distance, due in large part to the fact that he's willing to shoot from anywhere within a three-block radius of the arena.

But beyond Ovechkin, what do you think? Interestingly, it looks like a lot of shots coming from the right side... and three of these guys are left wings. One of these remaining five has a significantly closer average shot than the others, so that must be Brouwer. Or maybe Ward.

It can't be. It is. Marcus Johansson is B (Chimera is A, Brouwer is C, Ward is E and Fehr is F). Amazingly, Johansson had an average shot distance under 24 feet and yet had just one goal on 46 shots (2.2%). That's what's called unsustainable - through Friday night, players with an average five-on-five shot distance of 25 feet or closer had scored on 159 of their 1,352 shots, a cool 11.8%. Johansson's own five-on-five shooting percentage entering this season was 13.6%.

Anyway, the point here is that for all the talk of the Caps needing net presence and bodies in front (and, to be sure, that includes a lot more than just individuals' respective shot locations), Johansson is taking shots from closer and in higher-traffic areas than his similarly situated teammates (we've certainly seen that on the power play as well). Granted, Johansson might be eschewing quantity for ... dare I say... quality - his shot rate is still rather low - but either way, he's bound to start scoring more sooner rather than later.

One final note - shot locations here are notoriously iffy, but we're comfortable with the overall gist of this data... we think.