How does a conservative coach like Barry Trotz have his team enter the offensive zone, and what do they do once there?

Share All sharing options for: Barry Trotz and Zone Entries

[Ed. Note: With this post, we're happy to introduce our first offseason acquisition, Adam Stringham (with whom you're familiar from his work at Talk The Red. Give him a follow on Twitter and a warm welcome.]

It's an accepted truth among thinking hockey fans that puck possession is a strong indicator of a team's likelihood of future success. It's also an accepted truth among anyone who's been paying attention that the Washington Capitals have been a mediocre puck possession team since the departure of Bruce Boudreau nearly three seasons ago. In the interim, there has been some turnover in personnel, of course, but a bigger reason for the drop-off in possession has been the changes in systems (including Boudreau's own shift to a more conservative game plan), specifically neutral-zone play. Coaching systems dictate how, in general, a team intends to enter the offensive zone, and there is a clear relationship between how a team transitions from the neutral to offensive zone and puck possession:

"Metrics which are based on a team's shot differential are often referred to as "possession metrics" because they correlate strongly with puck possession and zone time, but it has never previously been established how players achieve that goal. It now seems clear that the strong correlation is more than incidental, that the teams that achieve good shot differential do so precisely by controlling puck possession, winning the neutral zone more than their share to get extra offensive zone possessions, and winning it decisively enough to maintain puck possession as they enter the offensive zone." Using Zone Entry Data to Separate Offensive, Neutral, and Defensive Zone Performance (Tulsky, Detweiler, Spencer, and Sznajder; PDF)

The bottom line here is that when a team dumps the puck into the zone (as opposed to a controlled entry), it is giving away possession and decreasing the likelihood that it will generate a shot attempt. So what can we expect from the Caps' fourth coach in as many seasons with regards to zone entries? It is not clear how much Barry Trotz will change his systems to fit a team that has more offensive potential then he is used to, but some insight may still be gleaned from analyzing how Nashville entered the offensive zone during Trotz's last season there.

Thanks to Corey Sznajder we have 35 and 26 games worth of Nashville and Washington zone entry data respectively from the 2013-14 season. Using that data, we can compile a broad overview of both teams' entry tendencies during 5 on 5 play. (Click images to enlarge.) 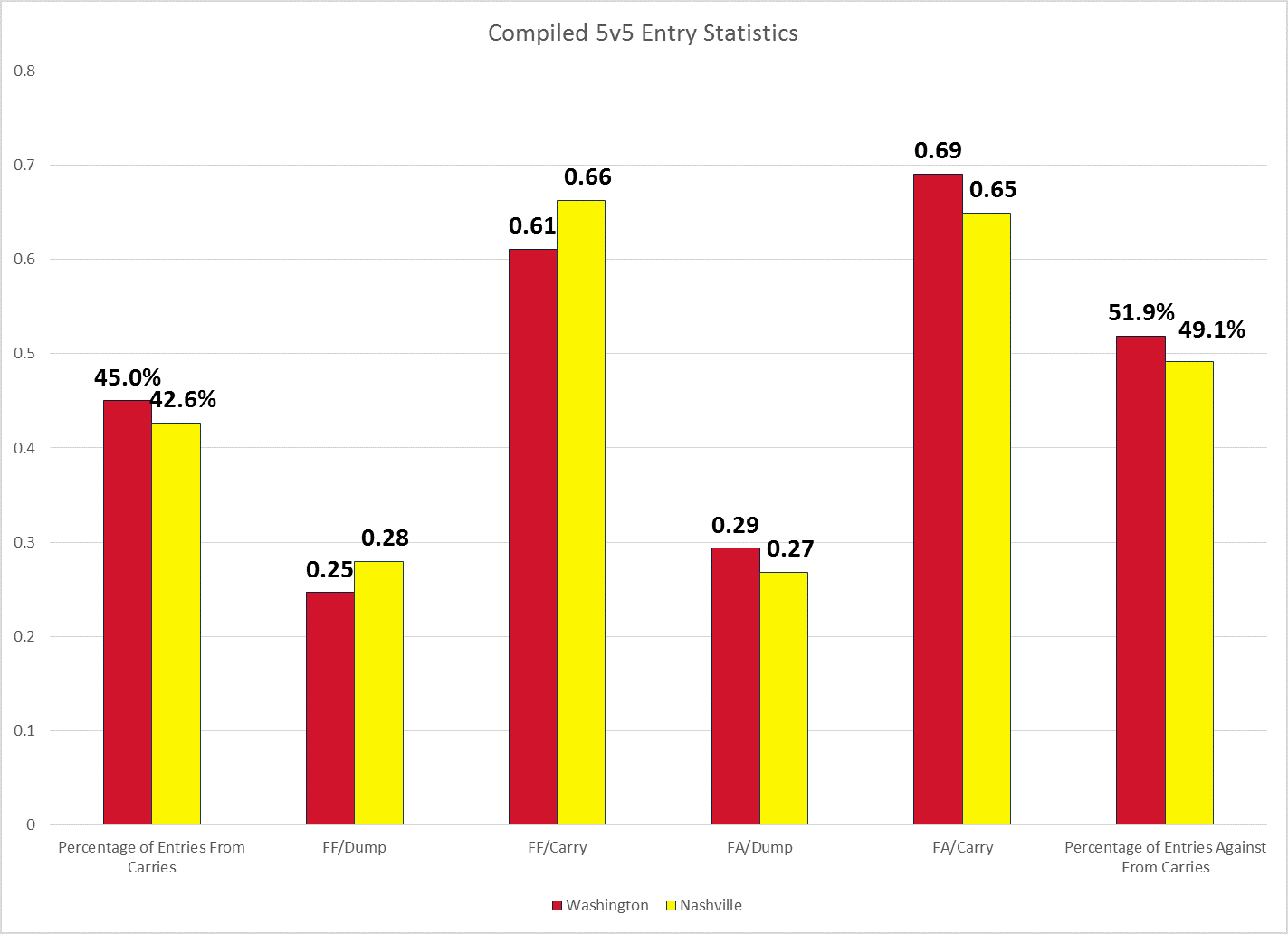 At first look the differences between Nashville's and Washington's rates (FF/Dump, FF/Carry, FA/Dump, and FA/Carry) do not look significant, but first looks can be deceiving. Nashville was more proficient than Washington in nearly every regard, generating more Fenwick attempts per entry of their own while giving up less to their opposition. The Capitals generated about 80% of their 5v5 Fenwick attempts from zone entries (both controlled and uncontrolled and as opposed to those originating with offensive-zone draws) compared to roughly 89% for their opponents. The Capitals averaged six Fenwick attempts-for and three Fenwick attempts-against in non-entry situations per game. What that all means is that if the Capitals maintained their carry-vs-dump-in ratios both for and against, saw no change in non-entry Fenwick attempts for or against, and generated and suppressed shot attempts at the same rates as the Predators did, they would have had a 5v5 FF% of 50.3%. That's more than three percentage points better than their actual 26th-ranked 5v5 FF% last season.

But the data indicates that the Predators were either unwilling or unable to carry the puck into the offensive zone with much regularity, so maybe that "maintained their carry-vs-dump-in ratios" is a bad assumption, at least at the offensive end of the rink. After Trotz's official introduction to the media he was asked about how the Capitals could create more offense while still improving their defense:

"There are times when teams jam up the neutral zone that you have to dump the puck. You want to be a puck possession team... If you get to the blue line and they are stacking it up and you want to dangle and create an odd man rush going the other way that’s a poor decision. [A better choice] would be a self-chip, [or a regular dump] second man races are really important in this game."

While there are certainly ample examples of poorly executed carries resulting in odd man rushes for the opposition, a team is still generally better off forcing a carry (especially with their skilled players) rather then surrendering possession with a dump. It's the safe play, and it's a part of hockey's orthodoxy - it's just how the game is played. But...

"Contrary to popular understanding about the importance of making a team go the full length of the ice, failed attempts to carry the puck into the zone actually lead to fewer shots against than dump-and-chase plays" (Tulsky, Detweiler, Spencer, and Sznajder).

Trotz appears to, at the very least, tolerate the use of statistics to improve on ice performance. In fact, during his one-on-one interview with Mike Vogel, Trotz made reference to how, by using data and video analysis, the Predators identified and adjusted the tendencies of one of their own defenseman who was dumping the puck more than needed.

"I found out, through stats, that we had a defensemen who would dump a little more often than he probably needed to. So then we really tracked it, on a one on one basis, and found that he had more time to make better quality plays." (Barry Trotz)

Here is how each Nashville and Washington defensive-pairing and line entered the offensive zone over the games sampled. 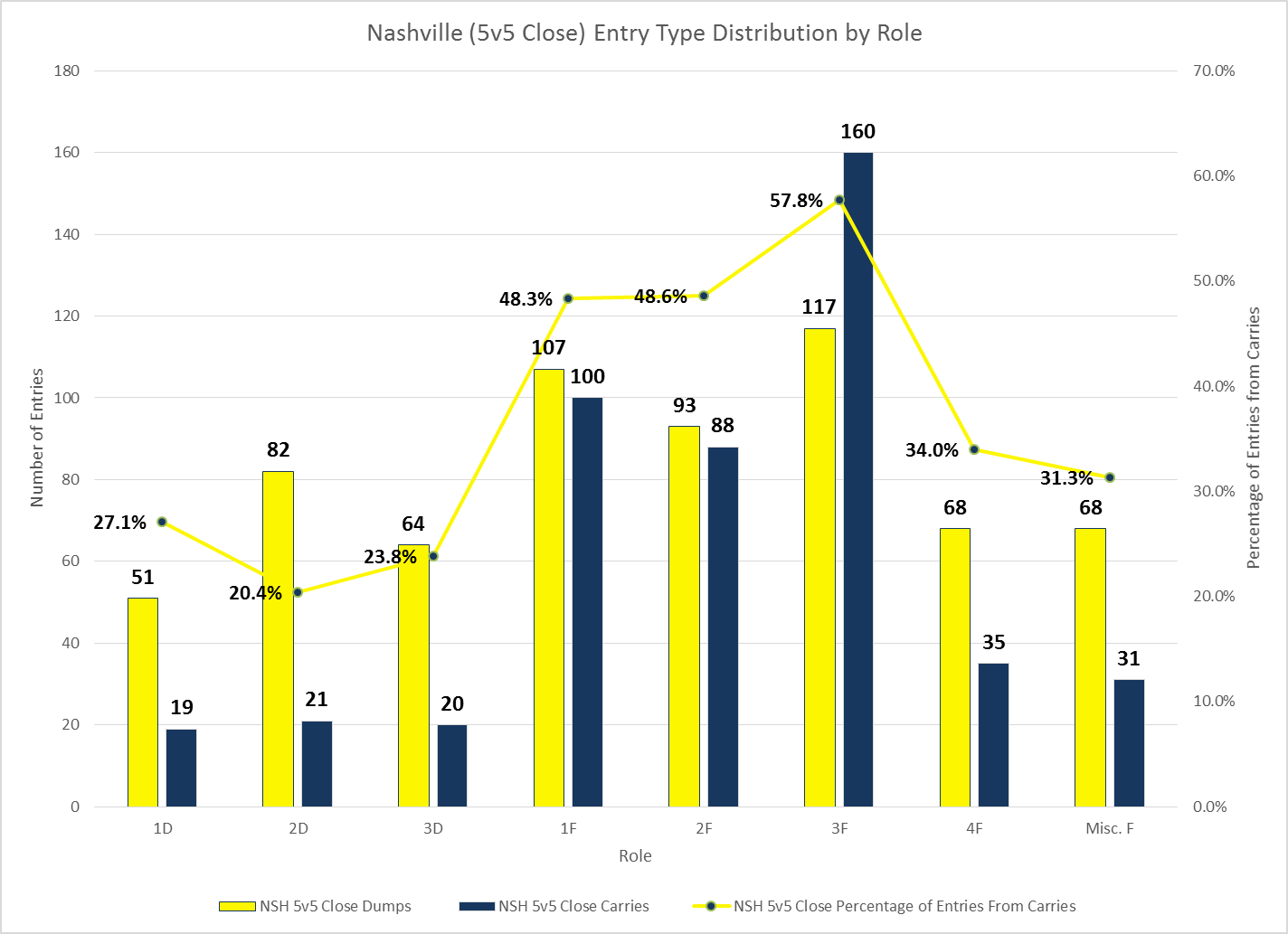 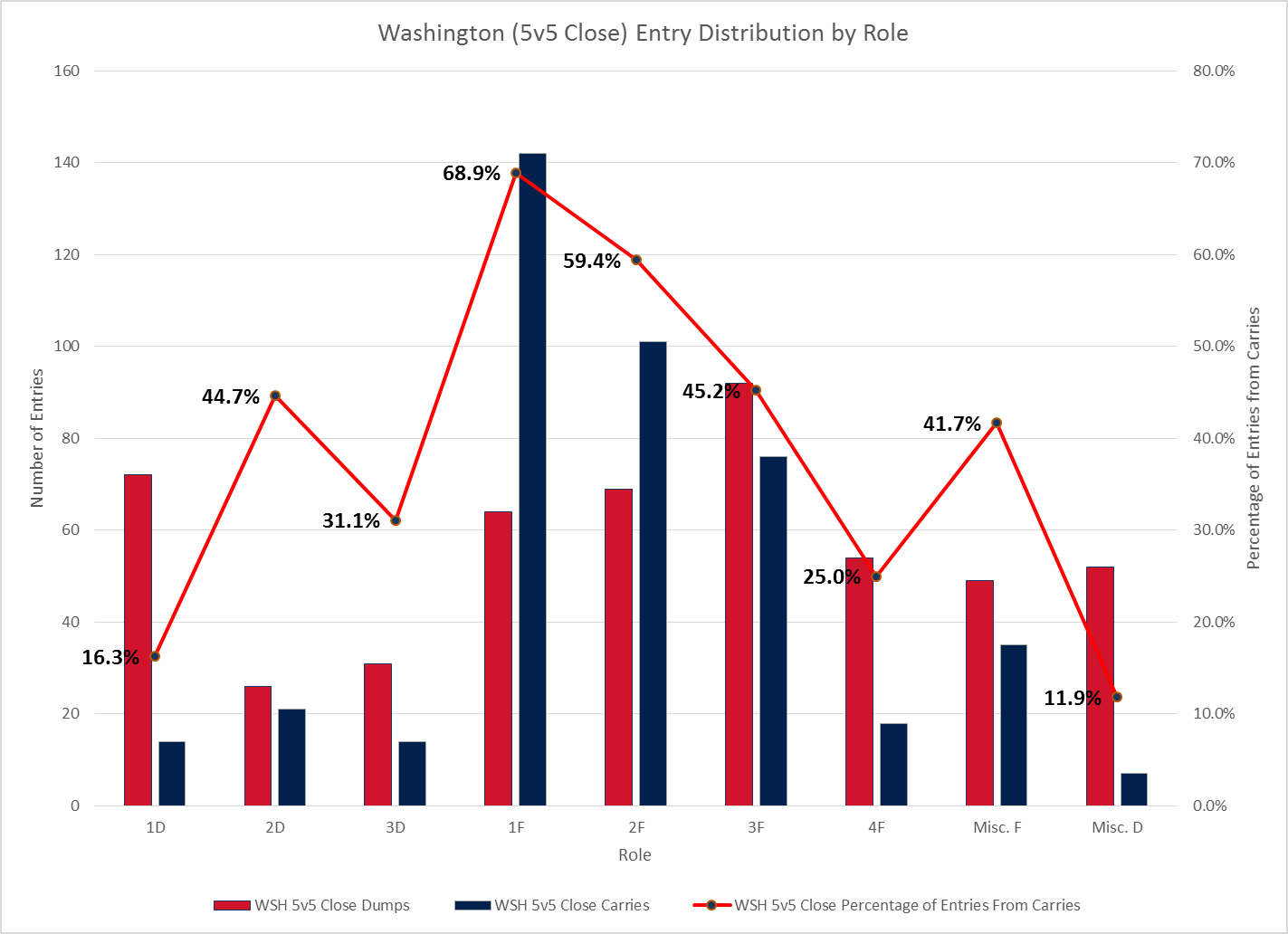 What stands out here is the Caps top-six forwards carrying the puck in more often than dumping it, and the bottom-six dumping more often, which is neither surprising nor unique. You also see a high rate of carries for the second defensive pairing, which was Mike Green and primarily Dmitry Orlov. And then there's that top pair. Hopefully Trotz will be able to help Karl Alzner the same way he helped his former player in Nashville - 87% of Alzner's zone entries were dumps.

Washington forwards carry the puck a lot, and that's great. That being said, Washington forwards were less efficient than their Nashville counterparts at generating Fenwick attempts once they entered the zone (efficiency is a term that is more frequently associated with basketball than hockey, but I think that it can be used here). So, for example, despite carrying the puck in for the majority of their entries, the Capitals' top line was only slightly by better than the rest of the team at possessing the puck last season, which is rather curious. Regardless, if 2013-14 was any indication, the Caps' top line may not carry the puck as often next year as they did last season, but they should be more efficient at generating shot attempts when they do. Seriously though, the top line really should carry the puck in as often as possible.

"The data suggests that teams should be trying harder than they are to carry the puck in. If coaches are telling their third line to dump the puck, they are probably giving away scoring chances. If coaches are telling the players to dump the puck in borderline situations where they think carrying it might lead to a turnover, they are probably giving away scoring chances. Even regrouping and trying again might be better than dumping the puck in, especially when the team has their top line on the ice" (Eric Tulsky)

Barry Trotz used a conservative approach in Nashville (Nashville dumped the puck for over 57% of their even strength zone entries), but he should change that in Washington - the Caps have not been particularly good at recovering the puck after depositing it into the zone. So here's a chance for Trotz to make good on his claim that he's going to let the talent dictate the way the team plays - the skill level of Washington's forwards is high, but their puck possession numbers have eroded over the last couple of seasons. If Trotz is able to increase the shot generating efficiency of Washington's top players without making them carry the puck significantly less, the Capitals will be a successful team next season.