From Alzner to Wilson, we're taking a look at and grading the 2013-14 season for every player who laced 'em up for the Caps for a significant number of games during the campaign, with an eye towards 2014-15. Next up, Marcus Johansson. 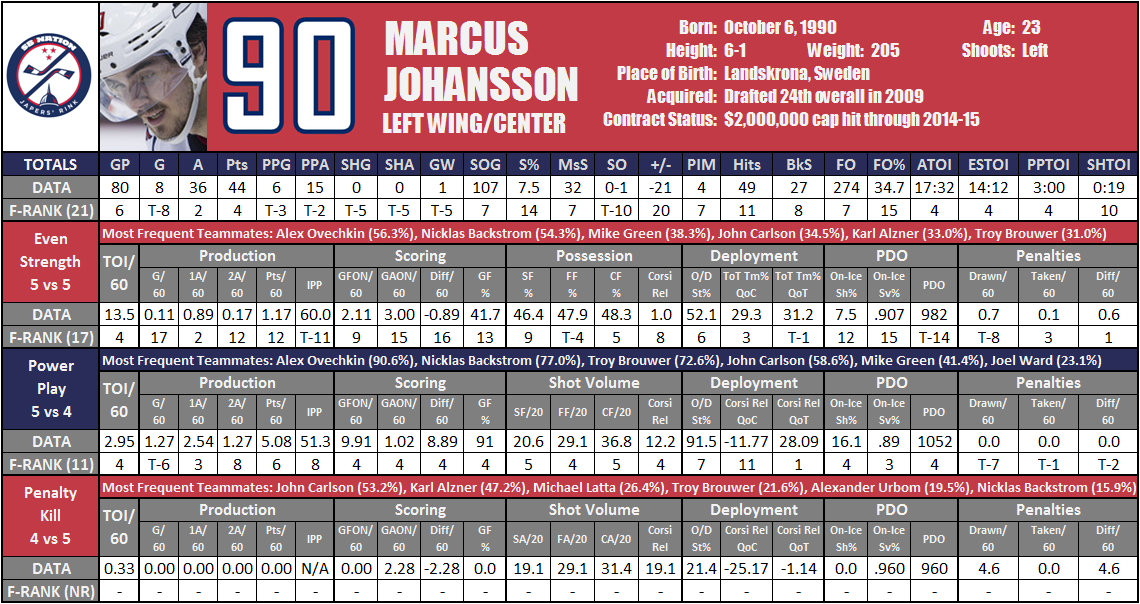 Johansson and his most frequent linemates (via Stats.HockeyAnalysis.com) and lines (via our own Muneeb): 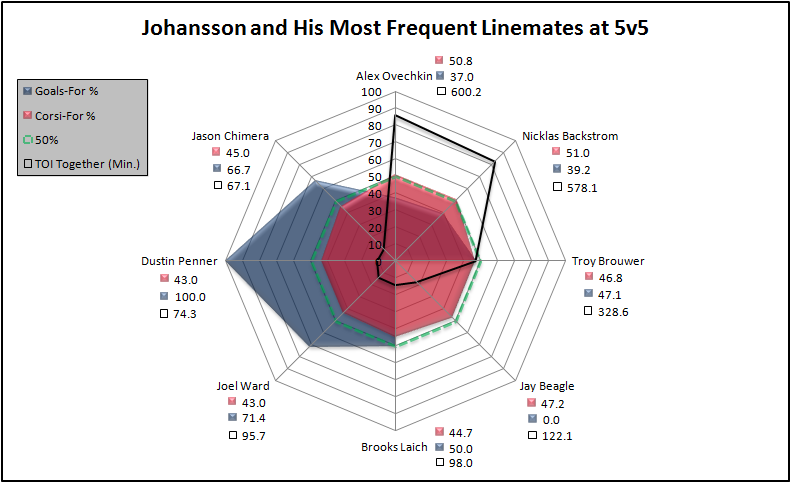 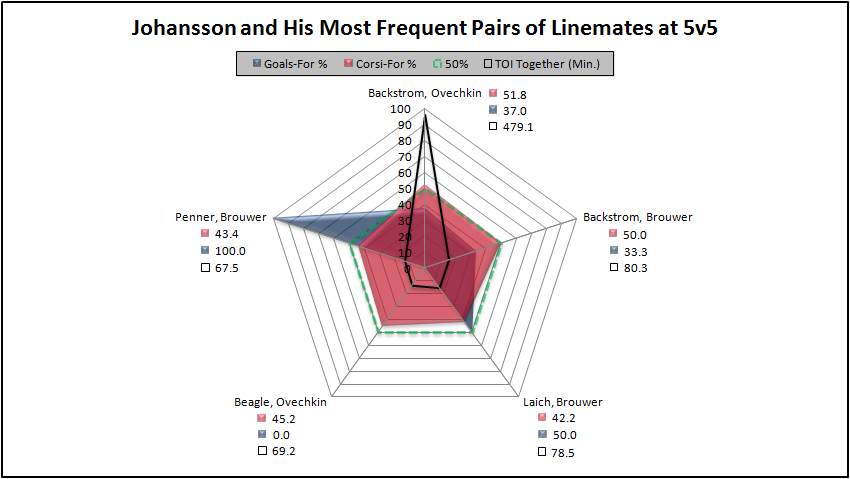 Johansson's Past Four Seasons (via Stats.HockeyAnalysis.com): 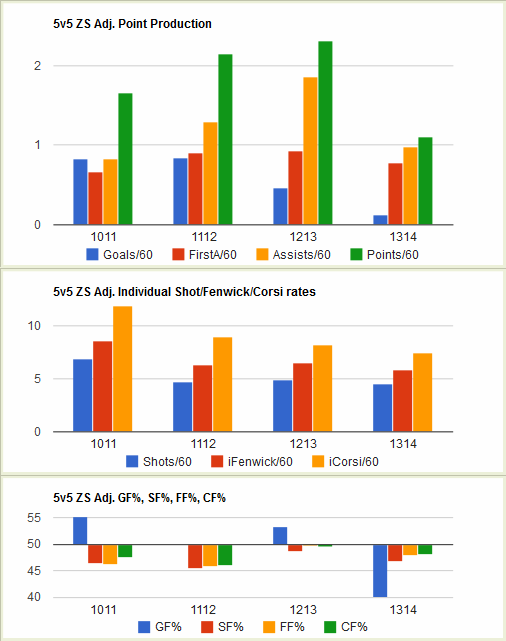 Key Stats: Set a new career high in assists with 36 and power-play goals with six, but set a new career low in even-strength goals with just two, as his per-game goal total tumbled to 0.10 after three seasons consistently around 0.18.

Interesting Stat: Posted a 2.95 pass/shot ratio overall, the third-highest mark in the League (meaning he was far more likely to set up a shot than to take one himself, to the surprise of no one who watched even a few minutes of any game this season).

The Good: As noted above, Johansson was productive in some areas (and less so in others), most notably finishing second on the team in even-strength assists and notching more primary helpers at evens than frequent linemates Alex Ovechkin and  Nicklas Backstrom combined. Speaking of that trio, with Johansson on the left side, the three managed a 51.8 Corsi-For percentage at five-aside... but just a 37% goals-for (apparently that puck luck from Spring 2013 didn't carry over to the fall and through the winter). A frequent "passenger" on that line in the past, there were times when Johansson looked to be more than that, particularly early in the season, as he posted 18 points in the team's first 21 games. Additionally, only Mikhail Grabovski and Jay Beagle took shots from closer to the net, on average, than Johansson at five-on-five - a point that actually probably would surprise folks.

Johansson displayed tremendous discipline, not picking up a single penalty until his 48th game of the season and only taking two minors all year, which helped him to a team-best plus-13 penalty differential (more than twice as good as second-place finisher Dmitry Orlov). But the highlight of Johansson's 2013-14, no doubt, came in Sochi where he was a late addition to the silver-medal Swedish Olympic team. Attaboy, Marcus.

Finally, it may be more correlation than causation, but the Caps went 21-3-4 when Johansson registered a point and just 17-27-10 when he didn't.

The Bad: With Marcus Johansson, the question is always how do you separate how much of his production is the result of his own skill, and how much is just him riding on Ovechkin's and Backstrom's coattails? On the one hand, when he wasn't skating with Ovechkin this season, the woeful 37% five-on-five goals-for percentage the two shared the ice for ballooned up to a break-even 50 percent (and it came almost entirely via a greatly reduced goals-against rate)... but the possession numbers dropped from above 50% to below 45%.

Johansson had a low PDO, mainly driven by a low on-ice save percentage for which he probably bears some responsibility, and that resulted in an ugly minus-21. Well, that and the two even-strength goals in 80 games.

In his fourth season in the League, Johansson showed some flashes of having a "next level" that he might get to, but they became fewer and farther between, it seemed, as the season wore on. He's probably not an ideal scoring line wing right now, but neither is he a great fit as a checking line center (or wing). He seems to be a bit of a 'tweener right now, and before too long it's going to be time for the Caps to make a decision on where - or if - he fits in their long-term plans.

This individual effort was so nice that we did an entire (well-titled) post on it. It's very much worth reading that entry for the details, but the tl;dr version is that it was overtime, then this happened, then Ovi put the rebound home. It seemed at the time like a breakthrough moment for Johansson, and perhaps it was. At the very least, it served as a glimpse of what's in the kid's arsenal that might be worth waiting for. (Also, if there was a runner-up GIF, it's this pass... or this one. Check 'em both out.)

The Discussion: So is Johansson simply a product of great opportunities, or does he bring something to the table on his own? Where does he slot into the team's lineup going forward, both in terms of position (wing or center) and line? What would it take for Johansson to earn a 10 next year?