A handy guide to the 2014 Rink Wrap format

It's once again Rink Wrap season, and with a slightly new format for 2014, here's a walk through what you're seeing. 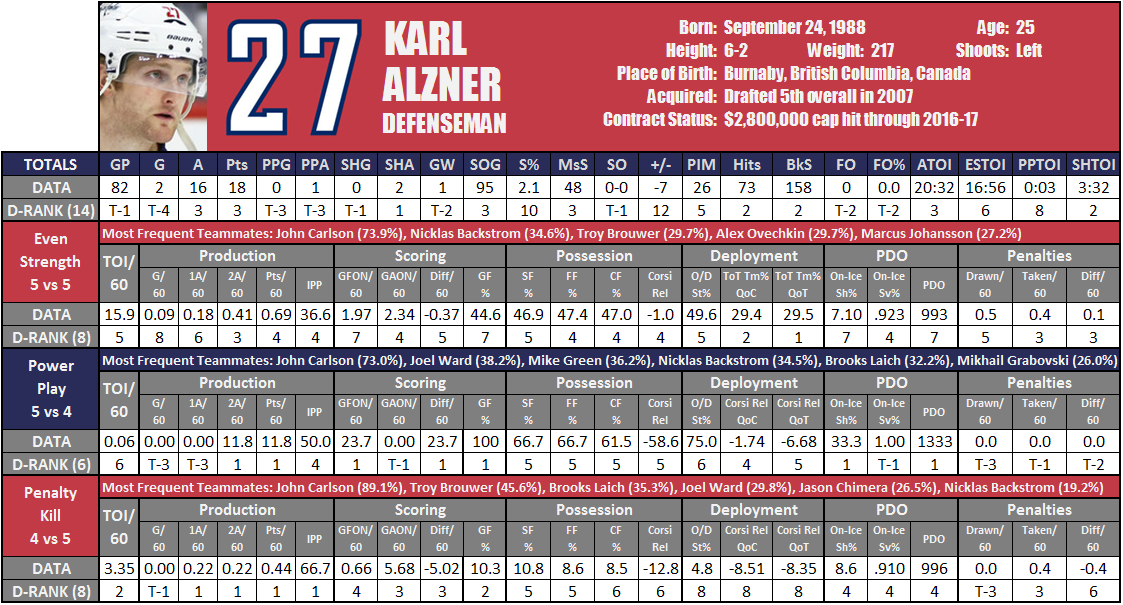 So what's here? There are essentially five sections - self-explanatory biographical info at the top, stat totals below it, and then sections for the player's stats in each of three game situations: five-on-five, five-on-four power plays and four-on-five penalty kills.

Each of the four statistical sections is comprised of three rows (metrics, data and rank), and the three game situations have a fourth row at the top detailing the player's most frequent teammates in those situations. Before we get into the acronyms and whatnot, a note on the "Rank" row. Each player is ranked among the Caps skaters at his position ("D" for Alzner), but only among those with sufficient ice time to be included in the group - that's the number in parentheses. For the "Totals" section, that's just about everyone; for the "Game Situation" sections, it's whatever makes sense and includes the referenced player. (Also, it should be intuitive, but all stats are ranked most/highest to fewest/lowest, with the exception of goals-against and penalties taken.)

Still with me? Good. Here's the list of acronyms (left-to-right) for the "Totals" section, with notes where applicable:

Got it? Grand. That's it for the Player Cards.

Next up is a quick look at the player and his most frequent partners (for defensemen) and linemates and lines (for forwards). You'll see the relative ice time with each outlined in black, and the player's GF% and CF% with each player, with a green ring at 50% for a quick visual point of reference.

Then come Usage Charts, which we've gone into plenty here before, and finally some charts from Hockey Analysis that should be pretty self-explanatory (and if they're not, click through and check out the glossary over there).

If you've got any questions or suggestions, let us know in the comments or tweet us or email or whatever. Enjoy!