In some ways, Marcus Johansson just can't win. Despite having the fifth-most points of any player in his 2009 Draft class (with the four players ahead of him - John Tavares, Matt Duchene, Evander Kane and Ryan O'Reilly - all having played at least 78 more games than Johansson), he gets little credit for what he's been able to do, but plenty of blame for what he hasn't. His successes? Chalk them up to riding shotgun with Alex Ovechkin and Nicklas Backstrom. His failures? They're all his.

And to an extent, that's fair. No one really questions his boxcar stats (goals, assists and the like). As we noted a couple of weeks back in our Mailbag when asked about what Johansson has to do to prove he deserves the ice time he's gotten, "The fact that there are still questions about whether Johansson is a top-six forward tells you that production isn't the only thing he needs to do to convince fans."

Even beyond the boxcars, though, he looked the part last year... at least alongside two superstars. And therein lies the rub. Johansson was markedly worse in terms of goal and possession stats in 2013 when away from Ovechkin and/or Backstrom, but Ovechkin was also markedly worse when away from Johansson and Backstrom and Backstrom was markedly worse when away from Ovechkin. (It's almost as if the trio was greater than the sum of its parts.) Small samples, new coach, new system, early-season injuries, late-season good fortune... there's so much "noise" related to Johansson's 2013 season that it's hard to pick up a clear signal. Just what, exactly, do the Caps have in Marcus Johansson? 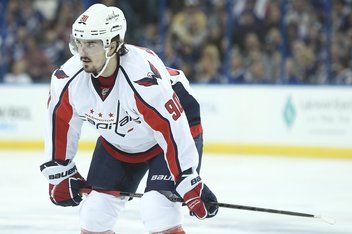 When we gave Backstrom the "Caps Cap Comparable" treatment earlier in the summer, we talked about the disappearing (and now reappearing) bridge contracts that spanned between a player's entry-level contract and his big pay day. For Backstrom, there was no bridge - he went straight from ELC to a 10-year/$67-million homerun, in large part because the Caps knew what they had in him. He was (and is) productive at an elite level, consistent and durable (when his opponents play within or close to the rules of the game, that is).

Johansson has yet to demonstrate that he's all of those things, and so when the Caps announced on Saturday that they'd inked the center to a two-year, $4-million deal, it made perfect sense - they like a lot of what they've seen so far, but still have some concerns. The Caps are happy to keep renting, dating, or whatever other metaphor you'd like to use to imply that they aren't yet ready to go all-in on Marcus Johansson (who will still be a restricted free agent upon expiration of this deal). Now it's on Johansson to earn that big deal with his play over the next two seasons.

For the player, what little leverage Johansson might have had this summer all but disappeared when the Caps were able to sign Mikhail Grabovski on the cheap last month, and so Johansson came in before camp and took what the Caps would give him. Smart move.

This would appear to be a good deal for the team and a fine one for Johansson ($2 million per year to have Ovechkin and Backstrom goose your numbers before your next deal ain't too shabby). But what does the market say? Via CapGeek, here are Johansson's 20-closest cap comparable forwards for the upcoming season (click to enlarge): 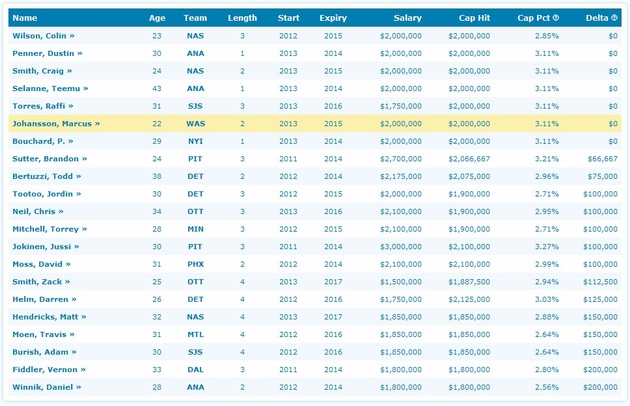 Recall our usual caveats - each of these deals is different, and variables such as restricted versus unrestricted free agency, terms versus dollars and the years in which the respective deals were consummated make them difficult to fairly compare... which matters when you're looking at Johansson's two-year RFA deal versus, say, Matt Hendricks' four-year UFA pact. It's also worth noting that Johansson is the youngest player on the list (and that Caps fans have become spoiled by the early successes of elite players).

The list itself contains all sorts of forwards, from a veteran's swan-song deal to tough-minute grinders, but Johansson is clearly among the top offensive producers on the list. In fact, over the last three years, only Teemu Selanne and Jussi Jokinen have put up more points than Johansson (170, 120 and 95, respectively), and only those two Finns and Pierre-Marc Bouchard and Todd Bertuzzi have averaged more points-per-game than Johansson (.85, .63, .58, .54, .52). ... And this is where we note that none of those players skates with Ovechkin and Backstrom (though to that point, Johansson hasn't seen nearly the power-play ice time that some of these other fellas have). 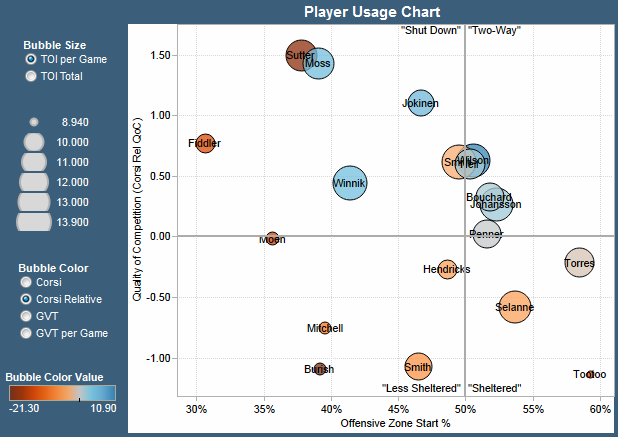 Johansson had a positive relative Corsi in 2013 for the first time in his career, and that includes an abysmal start while he dealt with concussion symptoms before shutting himself down and getting right. To wit, look at how much better he was after his first dozen games. Of course... well, you know.

For now, Marcus Johansson is the Caps' first-line left wing (as well he should be, for all the reasons we detailed here), and during the Caps' stretch run last season, he looked like he belonged, posting underlying numbers that were as impressive as his production. Now it's up to him to prove that that's the player he's becoming and that he's more than a passenger. If he is, he shouldn't have much trouble outperforming his current contract. If he isn't, the young Swede's goals, assists and speed will likely still be there... and attractive to GMs across the League.